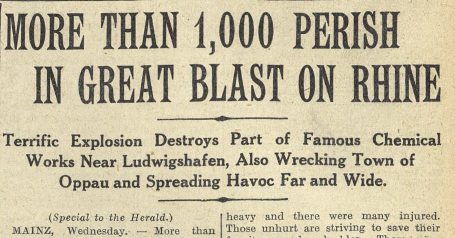 All round lie débris of all kinds, bricks and stones, shattered beams, twisted steel girders and rails. Not a fragmant of a wall is left standing within a radius of two hundred yards. But farther from the crater, the wreckage of the works continues to burn, while dense yellow fumes are given off, and much ammonia gas.

Rescue parties, firemen and French soldiers, equipped with gas masks, who were rushed to the scene of the disaster, are searching the wreckage and constantly extricating bodies. Few of these can be identified. Great numbers of the men inside the works were killed and comparatively few injured survivors have been found by the search parties. One report says that the explosion took place in Laboratory 53 and that of 800 men in the building not one escaped death. It is also stated that several soldiers of the Army of Occupation are among the victims of the disaster.

The small town of Oppau, close to the works, presents a picture of desolation, about a third of the houses being destroyed. The roofs of the others have been stripped off, as though by a hurricane. In the town the death toll was heavy and there were many injured. Those unhurt are striving to save their furniture and valuables. There were distressing scenes in the cemetery, where hundreds of bodies were laid out on the grass.

The explosion was so tremendous that its effects were felt over a wide area, causing damage and loss of life in neighboring towns. At Ludwigshafen, roofs were torn off and many people killed and injured. Mannheim, which is several miles from Oppau, had all its windows shattered, one man being killed and more than fifty injured. Windows were also broken at Worms. The report of the explosion was heard as far away as Frankfort and the shock of the air displacement was distinctly felt at Mainz. Telephonic and telegraphic communication was cut off in the whole district around Oppau, making it difficult to obtain details of the disaster.

After the first great explosion, a number of others followed at intervals, and fire, fed by the inflammable chemical products, spread rapidly through the rest of the works. Fire brigades were immediately set to work and first-aid contingents were sent from Landau, Spire, Neustadt and Kaiserslautern. The French Army medical service also quickly gave effective aid. 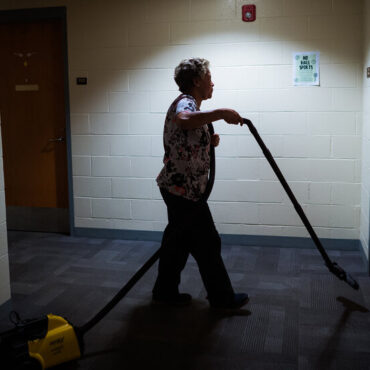 They Never Could Work From Home. These Are Their Stories.

Day after day, they went to work.While white-collar America largely worked from the cocoons of their homes, these workers left for jobs elsewhere. Most had no choice.For many workers around the country, the Delta variant’s surge this summer upended long-awaited plans to return to the office this fall. But millions more — including nurses, cashiers, restaurant and grocery workers, delivery drivers, factory workers, janitors and housekeepers — never worked from […]