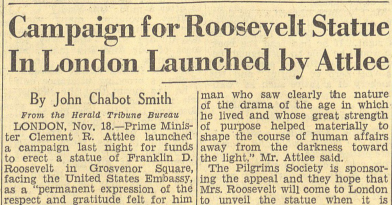 From the Herald Tribune Bureau

LONDON, Nov. 18. — Prime Minister Clement R. Attlee launched a campaign last night for funds to erect a statue of Franklin D. Roosevelt in Grosvenor Square, facing the United States Embassy, as a “permanent expression of the respect and gratitude felt for him by the people of this country.”

Mr. Attlee said in a radio address that King George VI and Queen Elizabeth had already contributed to the fund and he asked everyone in Britain to give at least five shillings ($1.) He said the standard contribution was made small so that as many people as possible would be able to contribute.

“We want this memorial to be in absolute fact our tribute, the British people’s tribute, to a great American,” he said. Therefore, contributions from American sources would not be accepted, he added.

“We shall be setting up a memorial not only to our friend but to a great practical idealist, to a man who saw clearly the nature of the drama of the age in which he lived and whose great strength of purpose helped materially to shape the course of human affairs away from the darkness toward the light,” Mr. Attlee said.

The Pilgrims Society is sponsoring the appeal and they hope that Mrs. Roosevelt will come to London to unveil the statue when it is ready.

Meanwhile, mayors of fourteen towns in Kent met at Sandwich to discuss the erection of a monument to Winston Churchill. A suggestion that the monument should take the form of a giant statue on the Dover cliffs was criticized on the grounds that it was not in keeping with British traditions and dignity, and alternative suggestions were invited.

The mayors decided to launch a nation-wide appeal and invite contributions from the United States. A dinner will be held in New York next month to launch the campaign, with a goal of $100,000 as America’s contribution. 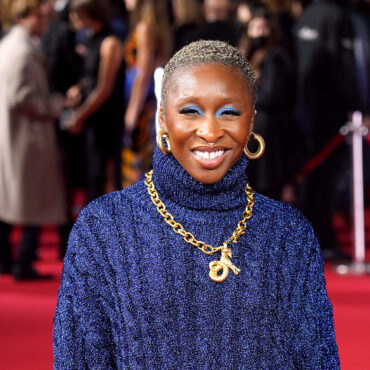