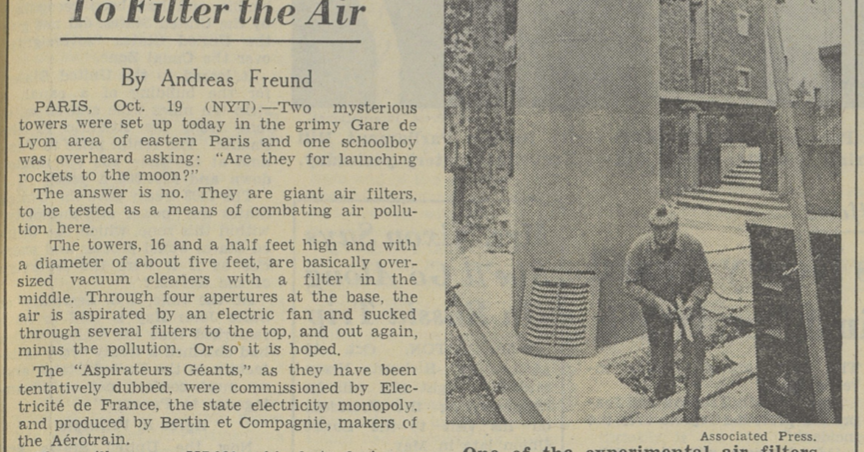 PARIS, Oct. 19 (NYT). — Two mysterious towers were set up today in the grimy Gare de Lyon area of eastern Paris and one schoolboy was overheard asking: “Are they for launching rockets to the moon?”

The answer is no. They are giant air filters, to be tested as a means of combating air pollution here.

The towers, 16 and a half feet high and with a diameter of about five feet, are basically oversized vacuum cleaners with a filter in the middle. Through four apertures at the base, the air is aspirated by an electric fan and sucked through several filters to the top, and out again, minus the pollution. Or so it is hoped.

The “Aspirateurs Géants,” as they have been tentatively dubbed, were commissioned by Electricité de France, the state electricity monopoly, and produced by Bertin et Compagnie, makers of the Aérotrain.

They will process 557,000 cubic feet of air per day, and retain in their filters 80 pounds of polluting agents a year.

Today, workmen were still busy connecting electric wires with the structures. It was hoped they would be ready to function by Friday. Will they be noisy? A technician replied: on verra — we’ll see.

Results will be tested for several months. If they are conclusive, an undisclosed number of the air filters will be erected elsewhere in Paris.

The timing of the experiment roughly coincides with an alarming increase in air pollution here last week. Because of a subway workers’ strike, many more cars were on the roads than normal. 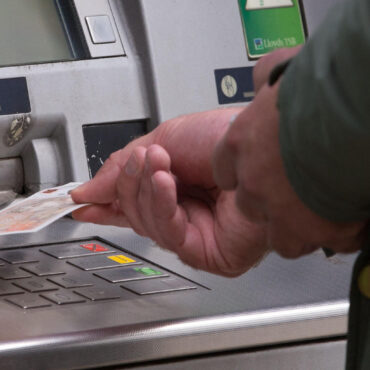 Locations where ATM withdrawals have declined most sharply in pandemic revealed

Average withdrawals from machines are just under 80 pounds People are withdrawing nearly £100 million less each day from ATMs compared with in 2019, according to cash machine network Link. Before the coronavirus pandemic hit, adults across the UK visited ATMs three times a month on average. But visits have since declined to fewer than twice a month on average. Customers now take out around an extra £10 during each […]