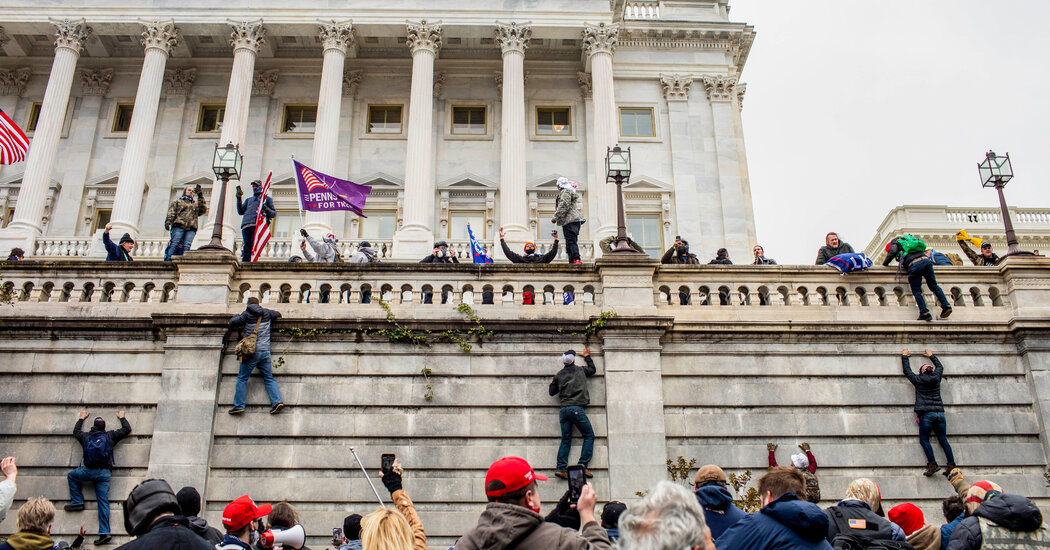 Erin Schaff, a Times photographer, was covering the certification of Joe Biden’s election at the Capitol on Jan. 6 when she heard protesters making noise inside the building. She walked toward the sounds to document what was happening.

Soon, a mob was running through the Capitol. Two or three men, wearing black, surrounded Erin and demanded to know where she worked. When they saw “The New York Times” on her congressional media badge, they threw her to the ground, ripped away one of her cameras and broke another before running away.

Erin then went looking for help — only to have police officers, assuming she was a rioter, point guns at her and yell at her to get down on her hands and knees. Once the officers understood she was a journalist, they helped her and two other photographers find a room where they could barricade themselves.

Running toward the story, even when it involves physical danger, is an inherent part of photojournalism. The hundreds of photographers around the world who work with The Times usually do so quietly. They rarely go on television or podcasts, and their names appear in small type below their photographs.

But readers understand the vital nature of their work. Today’s edition of The Morning is a tribute to Times photography, including 12 photographs that helped capture this year’s news. They come from the annual Year in Pictures feature, which has just been published.

Look closely, and you’ll see Erin’s name among the credits with the pictures below.

In subsequent days, as the House impeached Donald Trump for inciting an insurrection, National Guard troops protected the Capitol:

Almost 50 years after being elected to the Senate and more than 30 years after his first presidential campaign, Joe Biden moved into the White House. He and Jill Biden embraced after a socially distanced inauguration:

More people died of Covid-19 in 2021 than in 2020, both in the U.S. and worldwide. Here, Maritza Cruz comforted her mother, María, after Maritza’s father, Felipe, died in a Los Angeles County I.C.U.:

The invention and production of a Covid vaccine happened more quickly than virtually any prior vaccine. Here, a nurse in Munich filled syringes before vaccinating hospital employees:

The global economy continues to be disrupted by the pandemic. In Tan-Awan — a Philippine fishing town that once lured visitors with the promise of encountering whale sharks — tourism has slowed sharply:

The chaotic American withdrawal from Afghanistan left thousands of people desperate to escape as Taliban fighters retook the country:

Women mourned at sunrise in Surfside, Fla., a few days after a building collapse killed 98 people:

Simone Biles had been favored, but Sunisa Lee, a Hmong American teenager from Minnesota, won the gymnastics all-around Olympic Gold Medal in Tokyo:

Vilma Iris Peraza, 28, and her two children, Adriana, 5, and Erick, 2, were among the migrants from Honduras whom U.S. officers took back to Mexico in March:

Huge wildfires, aggravated by climate change, burned across the West this summer and fall. Here, a firefighter worked to save a home in Meyers, Calif., near Lake Tahoe:

Lives Lived: After meeting parents whose children had disabilities, Margaret Giannini decided to start a clinic to care for them. She died at 100.

Whether you’re in a funk or loving your recipes, at times every home cook can use some inspiration. The Times’s Food and Cooking staff tested dozens of cookbooks published this year and picked their favorites.

“Together, these guides represent the best of what cookbooks can be,” The Times’s Nikita Richardson writes. “They’re guaranteed to inspire.”

The pair broke into a rendition of Jingle Bells Michael Buble has teamed up for a Christmas duet with his “childhood hero” Kermit the Frog. The Canadian singer introduced his green-felted singing partner as part of Michael Buble’s Christmas in the City. In a video posted online he told his audience: “Ladies and Gentlemen, I am so lucky to be joined tonight by someone I’ve admired my whole life. “Please welcome the man, no wait, let’s get the species right. […]