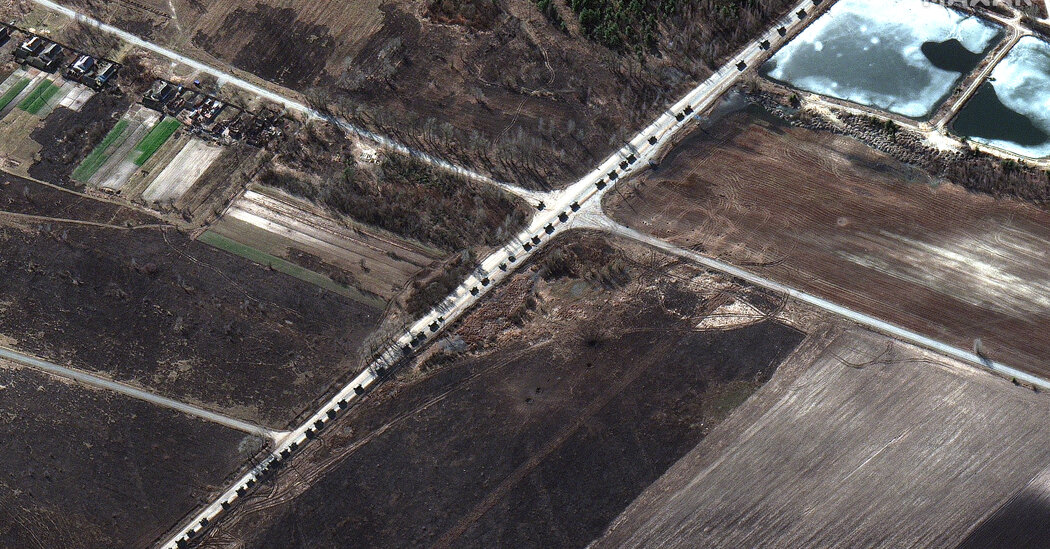 It has been a menacing presence in the war in Ukraine: Satellite images have shown a military convoy stretching 40 miles long on a roadway north of Kyiv, with a number of homes and buildings seen burning nearby.

Experts fear the convoy, which includes supply and armored attack vehicles, could be used to encircle and cut off the capital or to launch a full-on assault. The front end of the convoy is just 20 miles from the capital.

“What we are seeing is basically Phase 2, which is a shift to much more brutal, tactless, unrestricted warfare, which will lead to many more civilian casualties and bloodier battles,” said Mathieu Boulègue, an expert in Russian warfare at Chatham House, a leading policy institute in London.

While the Ukrainian military has air power and missiles capable of striking the convoy, its abilities are limited. Targeting such a long convoy would present its own challenges, as well as risk inciting Russia to retaliate.

“The Ukrainians attacking it from the air would have to make a decision of taking their very limited air force and going after what is a very difficult target,” said Frederick W. Kagan, the director of the Critical Threats project at the American Enterprise Institute, which has partnered with the Institute of the Study of War to provide updates on the Russian invasion. He noted that the Russian military is likely defending the convoy aggressively.

It was also possible that Ukrainian commanders are waiting to engage the armored vehicles until they enter Kyiv, where they could be more easily destroyed while confined on city streets, and where neighborhoods could provide plenty of hiding places and protection for soldiers firing anti-tank missiles.

Experts cautioned that it was still too early to tell the convoy’s exact purpose, saying that it was also possible that the convoy could be used as part of a pincer movement to cut off the northeast of the country. But they said that Russia appeared to be adapting its initial strategy.

Under that strategy, Kremlin leaders had wrongly assumed Ukrainian forces would suffer a swift defeat against a superior Russian military, and that Russian forces could quickly take major cities without much fighting. Instead, Russian forces were stalled by stiff resistance from both Ukraine’s military and citizens who took up arms.

So what do we know about this convoy? Cloud cover has made it difficult to get a continuous or complete view of the area or a clear sense of the convoy’s movement. It was not clear whether the buildings and homes seen burning had been attacked.

The convoy is dotted along a roadway that stretches from Antonov airport to the north toward the village of Prybirsk for approximately 40 miles, according to Maxar Technologies, which released the images.

It includes food supply trucks for soldiers and fuel for vehicles, but the bulk of it, in Mr. Boulègue’s assessment, is made up of miles upon miles of heavy artillery.

The convoy is not one continuous line. Some vehicles are spaced far apart from one another, while in some sections two or three military vehicles are moving alongside each other across the road.

Mr. Kagan said it was notable that the convoy was not made up entirely of attack vehicles.

A Pentagon official said on Tuesday that Russian forces had been plagued by shortages of fuel, food and spare parts. Mr. Kagan said a number of trucks in the column likely contained such essential supplies to avoid more logistical problems.

Mr. Kagan observed that when Russia initially concentrated its forces, in particular on the Belarusian border ahead of its advance, it didn’t appear to have built up the kind of logistical base usually mobilized before an attack was launched. That, he said, helped to explain why Russia’s incursion had failed to quickly capture the capital.

While it was not unusual for an invading force to have such logistical challenges, he said it was unusual for them to persist several days into an invasion and in a military operation in which President Vladimir V. Putin had spent at least months preparing.

“It reflects the fact that this invasion was in fact poorly planned, poorly, poorly prepared, and is being poorly conducted,” Mr. Kagan said. “That column reflects, in part, Russia scrambled to adjust to problems that they had created by the way that they prepared and conducted this attack.”

Despite Russia’s superior firepower and resources, visible in the miles of weaponry outside Kyiv, Mr. Kagan said the outcome of the battle was not a forgone conclusion, noting how Ukraine’s forces and civilians had shown unexpected resilience.

“I would hedge that bet,” he said. 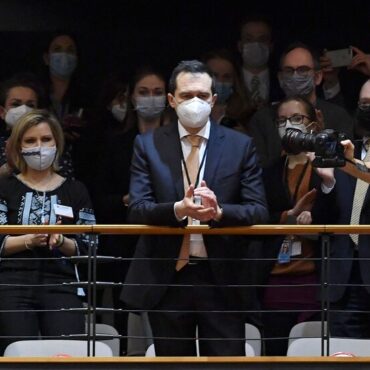 Why Joining the E.U. May Not Be Easy for Ukraine

It was an impassioned plea: President Volodymyr Zelensky of Ukraine this week asked for his country to join the European Union, the world’s biggest trading bloc, which also has helped preserve peace in Europe for decades.“We have proven that at a minimum we are exactly the same as you,” he told the European Parliament on Tuesday. “So do prove that you are with us, do prove that you will not […]