A New 10-Year Plan for the Cosmos 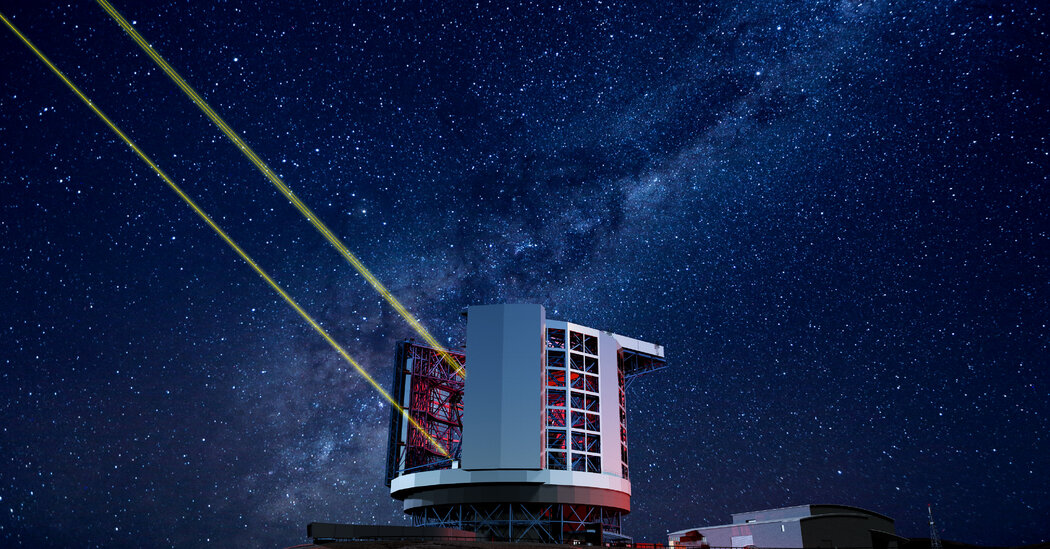 American astronomers on Thursday called for the nation to invest in a new generation of “extremely large” multibillion-dollar telescopes that would be bigger than any now on Earth or orbiting in space.

The investment would entail bailing out and combining the efforts of two rival projects, the Giant Magellan Telescope and the Thirty Meter Telescope. Once completed, these telescopes, with primary gathering mirrors 25 and 30 meters in diameter, would be about 100 times more sensitive than any telescope currently in operation.

They would allow astronomers to peer deep into the cores of distant galaxies, where monstrous black holes roam and sputter energy; investigate mysteries like dark matter and dark energy; and study planets around stars other than the sun. Perhaps more important, they could raise new questions about the nature of the universe.

But astronomers have struggled for years to raise enough money to complete their dreams. In the new proposal, the National Science Foundation would provide $1.6 billion to finish both projects and then help run them as part of a new program called the United States Extremely Large Telescope.

On Thursday, the astronomers also urged NASA to embark on a new Great Observatories Mission and Technology Maturation Program that would develop a series of astrophysics spacecraft over the next 20 to 30 years. The first would be an optical telescope bigger than the Hubble Space Telescope and capable of finding and studying Earthlike planets — potentially habitable “exo-Earths” — in the nearby cosmos. Only NASA could accomplish this, the astronomers said, noting that it could be ready in 2040 and would cost $11 billion.

Those two recommendations were the biggest in a long-awaited, 614-page report, Pathways to Discovery in Astronomy and Astrophysics for the 2020s, released by the National Academies of Sciences, Engineering and Medicine on Thursday.

Every 10 years for the last 70, the academy has sponsored a survey of the astronomical community in order to set priorities for big-ticket items over the next decade. The Decadal Survey, as it is known, commands the attention of Congress, NASA, the National Science Foundation and the Department of Energy.

This year’s effort — chaired by Fiona A. Harrison of the California Institute of Technology and Robert C. Kennicutt, Jr., of the University of Arizona — took three years and entailed dozens of meetings and discussions among 13 subpanels spanning every branch of astronomy. In all, 860 White Papers were submitted to the survey, describing telescopes that might be built, space missions that should be launched, experiments or observations that should be done, and issues such as diversity that the astronomical community should address.

In an interview, Dr. Harrison said their committee had tried to balance ambition against the amount of time and money these projects would take. For instance, several ideas were floated for planet-prospecting spacecraft. Some were too big, some were too small; some would take a century to execute. Rather than choose one of these, the group asked the community and NASA to come back with ideas for a space telescope six meters in diameter. (Hubble’s main mirror is 2.4 meters in diameter.)

“A six-meter telescope appears to be an achievable ambition,” Dr. Harrison said.

“This is an ambitious quest by nature,” she added. “Only NASA, only the U.S. can do this. We believe we can do it.”

Matt Mountain, president of the Association of Universities for Research in Astronomy, or AURA, which runs observatories for the National Science Foundation, described the decadal report as “pretty damn bold” in an email. “And they haven’t shied away from articulating a vision across several decades, which in reality is what it will take, and needs to take.”

The decadal surveys have a track record of success. Both the Hubble Space Telescope, launched in 1990 and still operating, and the James Webb Space Telescope — designed to see to the beginning of time, and scheduled to launch next month — benefited from being highly ranked in previous decadal surveys.

And so the results of each new survey are eagerly anticipated by the astronomy and astrophysics community. “The committee has been extremely secretive,” said Natalie Batalha, a professor at the University of California, Santa Cruz, who played a leading role in NASA’s Kepler planet-finding mission, in an email on the eve of the report’s release. “I’ve not heard anything, honestly. I’m on pins and needles waiting.”

In its report on Thursday, the academy listed three overarching scientific goals for the next decade: the search for habitable planets and life; the study of black holes and neutron stars, which are responsible for the most violent events in nature; and the growth and evolution of galaxies.

“The coming decades will set humanity down a path to determine whether we are alone,” the report said. “Life on Earth may be the result of a common process, or it may require such an unusual set of circumstances that we are the only living beings within our part of the galaxy, or even in the universe. Either answer is profound.”

The idea for an Extremely Large Telescope program is ambitious, as it involves the blending of two rival telescope projects, the Thirty Meter Telescope, planned for either the top of Mauna Kea in Hawaii or the Canary Islands in Spain, and the Giant Magellan Telescope underway in Chile.

Both telescopes are the dream products of sprawling international collaborations and two decades of raising funds and recruiting partners. Either telescope would be roughly three times as large as anything now on Earth and be 100 times more capable of discerning faint distant stars in the cosmos; working in concert, they could tackle deep questions about the cosmos. But neither project has raised enough money — more than $2 billion is necessary — to achieve its goals.

Failure to build these telescopes would cede leadership in ground-based astronomy to Europe, which is building a 39-meter telescope — the European Extremely Large Telescope — in Chile’s Atacama Desert — that is expected to start operating in 2027. Some astronomers have compared the situation to the cancellation of the American Superconducting Super Collider project in 1993, which handed the future of particle physics to CERN and the Large Hadron Collider in Geneva.

If the National Science Foundation were to invest in completing the two telescopes, it would gain significant observing time on them, which would be doled out to American astronomers.

“The two telescopes, being in opposite hemispheres and with radically different designs, would be perfectly suited for complementary interrogations of the cosmos,” Dr. Harrison said. “To imagine the U.S. would not have access to that is unthinkable.”

Major challenges await. The Giant Magellan team has already broken ground in Chile, but progress on the Thirty Meter Telescope has been stymied by protests and blockades by native Hawaiian and other groups. An alternate site has been designated on La Palma in the Canary Islands.

Astronomers hope that the stars will align for their audacious vision, given the current emphasis on infrastructure and rising science budgets. But they are haunted by a history of cost overruns, most notably with the James Webb Space Telescope, which will finally launch in December after years of delay and with a final price tag of $10 billion.

“Looming over all of this is JWST — the whole program will be predicated on its success,” said Michael Turner, a cosmologist now with the Kavli Foundation in Los Angeles and a veteran of decadal surveys. “Fingers crossed.” 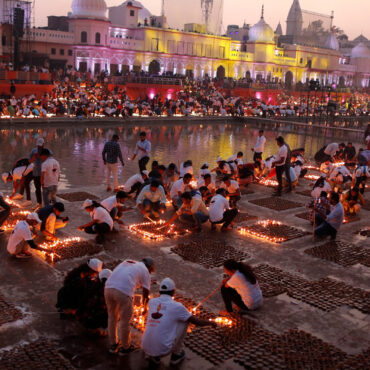 Hundreds of thousands of people traveled around India this week as the country prepared to celebrate Diwali, the festival of lights and one of the country’s major holidays, on Thursday.Bazaars and malls across India filled up with shoppers as India reported its lowest number of daily coronavirus cases since February. The crowded scenes were a marked turnaround from last year’s festival, which was observed without the usual fanfare of prayers […]