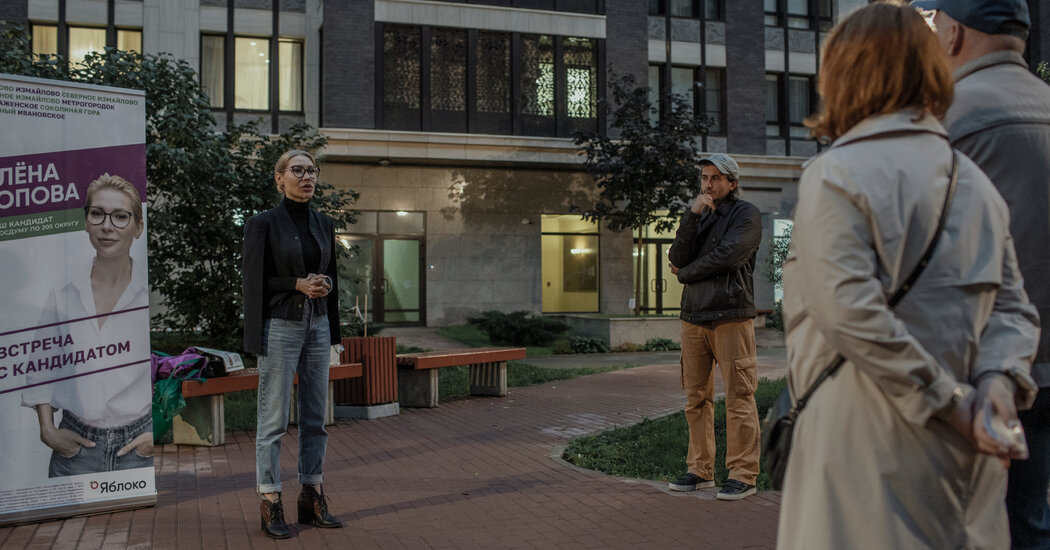 MOSCOW — Sitting in the cramped kitchen of her suburban Moscow headquarters, Alyona Popova pointed to the five-story brick complex next door and explained why domestic violence is at the center of her campaign for a seat in the Duma, Russia’s lower house of Parliament.

As she stumps across the 205th electoral district, a working class area on Moscow’s eastern fringe, Ms. Popova implores women to turn against Vladimir Putin’s ruling party, United Russia, which has rolled back protections for women over the last several years. Leading up to this weekend’s election, she has presented the issue in urgent terms, and a proposal to make all acts of domestic violence subject to criminal penalties tops her campaign platform.

According to Ms. Popova’s analysis of data collected by Russia’s national statistics agency, there are more than 16.5 million victims of domestic violence every year. More than 12,200 women, or two thirds of those murdered in Russia between 2011 and 2019, were killed by their partners or relatives, according to one study.

“This is our reality; the only term we can use is ‘epidemic’,” said Ms. Popova, 38, a lawyer and activist who is running with the liberal Yabloko party, though she is not a member.

There is some evidence that many Russians agree with her. A 2020 poll conducted by the independent Levada Center found that almost 80 percent of respondents believe legislation to curb domestic violence is necessary. A petition initiated by Ms. Popova in support of such a law garnered almost one million signatures.

But will these supporters vote? And in authoritarian Russia, where election outcomes are effectively preordained, would it make a difference?

Even in a country where women make up 54 percent of the population, domestic violence remains largely absent as an animating issue for voters, taking a back seat to problems like corruption, rising consumer prices, the lack of economic opportunity and the coronavirus pandemic.

“For our voters, this problem is at 90th place,” said the deputy speaker of the Duma, Pyotr O. Tolstoy, who is seeking a second term with United Russia.

He mocked suggestions that women might abandon his party, which holds 336 of 450 seats in the Duma. Indeed, women are a core part of United Russia’s voter base. In part this is because they occupy the majority of public sector jobs in fields like teaching, medicine and administration, meaning their income often depends on the political system in power.

Irina Yugchenko, 43, also expressed skepticism about Ms. Popova’s focus on domestic violence as she exited a Metro station one evening recently. “Sure, of course there should be a law, but if it happens to women more than once, we have to ask why,” she said, voicing a common view in Russia. “If my friends dealt with this, they would not accept it.”

She said she was undecided about whom to vote for, and doubted that the election would bring any change, adding cynically “we are not voting for the first time.” A July 2021 survey found that only 22 percent of respondents planned to vote, which would be a 17-year low.

Over the past decade, Mr. Putin and his party have become increasingly conservative in their social policies. As Russia’s conflict with the West widened, the Kremlin started to bill itself as the stronghold of traditional family values. The state promoted patriarchal family structures and supported reactionary attitudes toward L.G.B.T.Q. Russians.

In 2016, the government labeled the Moscow-based Anna Center, which provides legal, material, and psychological assistance to women dealing with abuse, a “foreign agent.” The designation carries negative connotations and imposes onerous requirements. Last year, the government designated another group, Nasiliu.net (“No To Violence”), as a foreign agent.

Duma deputies voted 380-3 in 2017 to partially decriminalize domestic violence, reducing it to an administrative offense if it happens no more than once per year. Harm that results in bruises or bleeding but not broken bones is punishable by a fine as low as 5,000 rubles, or $68, slightly more than illegal parking. Only injuries like concussions and broken bones, or repeated offenses against a family member, lead to criminal charges. There is no legal instrument for police to issue restraining orders.

A draft of an anti-domestic violence law that was proposed in 2019 launched a debate in the Duma but it was ultimately amended so much that its early supporters, including Ms. Popova, were “horrified.” It was never put to a vote.

But in recent years, several dramatic cases have sparked outrage, making the issue more politically potent. In one famous case, Margarita Gracheva’s husband chopped off both of her hands with an ax in 2017, months after she began asking the police for protection. (He was later sentenced to 14 years in prison. She now co-hosts a show on state television about domestic violence.)

“Finally this issue got so much attention that it became a political issue,” said Marina Pisklakova-Parker, director of the Anna Center.

In April, Russia’s Constitutional Court ordered lawmakers to amend the criminal code to punish repeat domestic violence perpetrators, concluding that both protections for victims and punishments for offenders were insufficient. And advocacy groups have registered a spike in domestic violence connected to the Covid-19 pandemic.

The Duma has not acted.

Many United Russia voters appreciate government vouchers given to mothers. The benefits were recently extended to women with only one child, as Moscow tries to raise the country’s declining birthrate.

But that is no substitute for elementary protection, said Oksana Pushkina, a popular television personality who entered the Duma with United Russia in 2016 and made fighting domestic violence one of her priorities.

“All these are support measures that are designed to leave a woman at home, and not create opportunities for her self-realization and economic independence,” she said. “In this way, the Russian authorities provide for the basic needs of Russian women, in return for their political loyalty. But such government spending is by no means a social investment.”

Ms. Pushkina, who championed the domestic violence law in the Duma, was not invited to run for a second term.

“Apparently, United Russia and the people in the presidential administration considered me too independent, and the pro-feminist agenda too dangerous,” she said.

Experts and survivors say much of the opposition to the 2019 draft law was uninformed, with many opponents wrongly asserting that if a restraining order were imposed, a man could lose his property, or that children could be removed from families.

“They are scared that the time of Stalin, when people informed on their neighbors, could return,” said Irina Petrakova, a human resources assistant who survived seven years of abuse by her ex-husband. She said she reported 23 incidents to the authorities on eight occasions, but that her husband has not spent a single day in jail.

She, Ms. Gracheva and two other women are suing Russia before the European Court of Human Rights for failing to protect them.

Ms. Petrakova, who also works as a life coach, said she supported Ms. Popova, whose district is adjacent to hers. But she shrugged when asked if United Russia’s refusal to combat domestic violence could pull women away from the party. Many of its voters, she said, had lived through the turbulent 1990s and prized stability.

She planned to vote, but said there were no worthy candidates in her district.

“If I could make check mark against everyone, I would,” she said.

Most of Russia’s opposition has been jailed, exiled, or prohibited from running in this weekend’s elections. At a small meeting with potential constituents in a park on Sunday, Ms. Popova, who is facing 10 other candidates, said she was committed to participating in elections, even uncompetitive ones, for as long as possible.

And she was optimistic about polls her team had commissioned, showing very strong support for her among women aged 25 to 46.

“It means that females are uniting for the future, for changes,” she said. “This is the main victory that we can imagine during our campaign.”

Two young women in the audience said they planned to vote for her.

“Maybe women in an older generation see domestic violence as normal,” said Maria Badmayeva, who is 26. “But we in the younger generation are more progressive. We think the values that Alyona stands for are essential.” 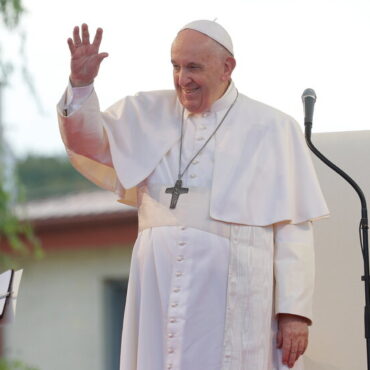 ‘Not a Flag to Wave’: Pope Criticizes Political Use of Christianity

ROME — Pope Francis on Tuesday rejected in stark terms the use of the cross as a political tool, an apparent swipe at nationalist forces in Europe and beyond that have used the imagery of Christianity for personal gain.“Let us not reduce the cross to an object of devotion, much less to a political symbol, to a sign of religious and social status,” Francis said in eastern Slovakia during a […]