Afghan Uyghurs Fear Taliban Will Deport Them to China 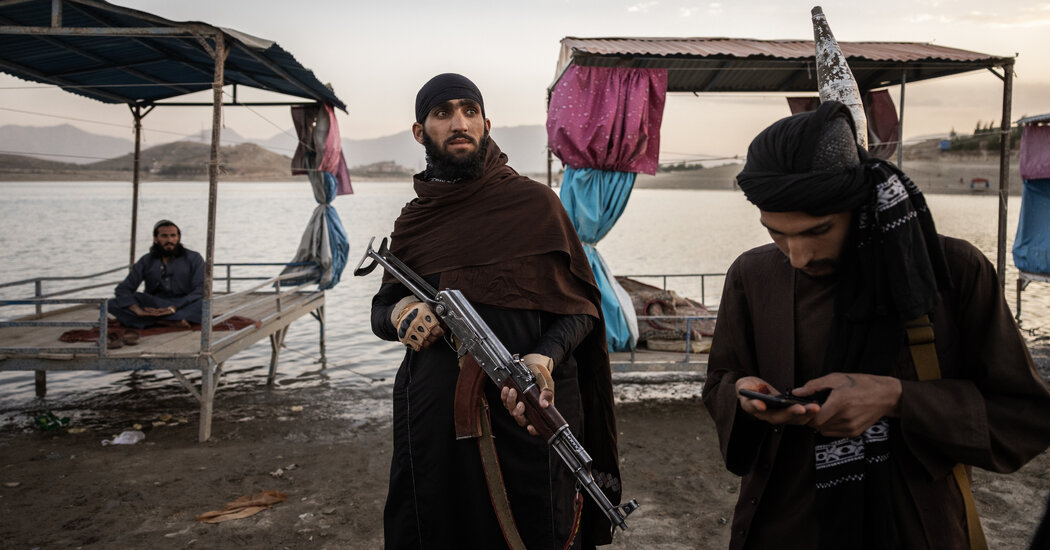 Ibrahim’s parents fled political turmoil in China for Afghanistan more than 50 years ago. At that time, Mao Zedong had unleashed the Cultural Revolution, and life was upended for many Uyghurs, the mostly Muslim ethnic group in Xinjiang that included Ibrahim’s parents.

Ibrahim was born in Afghanistan. But now he, too, is trying to escape the clutches of Chinese authoritarianism.

He and his family have been afraid to leave their home in Afghanistan since the Taliban, the country’s new rulers, took control last month, venturing outside only to buy essentials. “We are extremely worried and nervous,” said Ibrahim, whose full name is being withheld for his safety. “Our children are worried for our safety, so they have asked us to stay home.”

For years, Chinese officials have issued calls for leaders in Afghanistan to crack down on and deport Uyghur militants they claimed were sheltering in Afghanistan. The officials said the fighters belonged to the East Turkestan Islamic Movement, a separatist organization that Beijing has held responsible for a series of terrorist attacks in China since the late 1990s.

The United States removed the East Turkestan Islamic Movement from its list of terrorist groups during the Trump administration, angering Beijing. But the Taliban, in their new role as diplomats, have been eager to establish warm relations with China, meeting most recently on Thursday with Chinese officials. Many Uyghurs in Afghanistan fear they will be branded terrorists and sent to China as pawns in the Taliban’s effort to win favor and economic aid from the country.

It is unclear whether Uyghurs in Afghanistan face an immediate threat to their safety, but some say they dread the future that would await them if they were sent to Xinjiang. Since 2017, the Chinese government has locked up close to a million Uyghurs in camps and subjected those outside to constant surveillance. China says the camps are necessary to weed out extremism and to “re-educate” the Uyghurs.

Before the Taliban took control of Afghanistan, the Chinese government said it had received assurances from the insurgents that the country would not become a staging ground for terrorist attacks. Anxious Uyghurs in the country watched television footage of Wang Yi, China’s foreign minister, standing side by side with leaders of the Taliban in July. Earlier this month, Mr. Wang pledged $30 million in food and other aid to the new government, as well as three million coronavirus vaccine doses; on Thursday, he said Afghanistan’s overseas assets “should not be unreasonably frozen or used as a bargaining chip to exert pressure,” obliquely referencing American control of billions of dollars belonging to the Afghan central bank.

Since the late 1990s, Beijing has succeeded in pressuring several countries to deport Uyghurs. The Uyghur Human Rights Project, an advocacy group based in Washington, has counted 395 cases of Uyghurs being sent to China since 1997. The group said in an August report that journalists and human rights organizations have documented 40 cases of detentions or renditions from Afghanistan to China, though it has verified only one of them.

Khorsid Hasan, a Uyghur retiree living in Virginia, said that after she contacted the Uyghur Human Rights Project in August, the group wrote a letter to the State Department urging American officials to address the vulnerability of Uyghurs in Afghanistan. Uyghurs in the country “fear more for their lives than ever before,” Ms. Khorsid said in an interview. “They hope to be evacuated as soon as possible.”

The rights group’s letter to the State Department warned of the grave fear that the Taliban “will now make secret agreements with China to extradite Uyghurs to the P.R.C.”

The Uyghur population in Afghanistan is estimated to be around 2,000 to 3,000. They arrived in waves, some as early as the 18th century. Many are second-generation immigrants with few links to China. Their parents joined an outflow of refugees from Xinjiang in the late 1970s, ending up in neighboring Afghanistan, where they settled and had families.

Those families are once again seeking to uproot their lives. Even though they are Afghan citizens, their identity cards show that they are either Chinese refugees or members of the ethnic group, making them easy to track should the Taliban decide to round them up.

The Taliban did not respond to requests for comment.

In the city of Mazar-i-Sharif, Mohammad, a 39-year-old Uyghur farmer whose full name has been withheld to avoid reprisals, said he was so desperate to flee Afghanistan with his young family that he contacted human traffickers to help them get into Iran. He was told that it was impossible to do with the Taliban in charge, he said.

He has also contacted exile Uyghur groups in Germany and Turkey, and organizations providing refugee assistance in the United States and Canada with no success, he said.

Well before the Taliban took control, life was difficult for Uyghurs in Afghanistan, who often faced discrimination. Ibrahim, 54, said he kept a low profile as a businessman. “We tried our best to erase our identity as Uyghurs,” he said.

He and his wife, who is also Uyghur, live with their two daughters, 28 and 20, and a 25-year-old son, who has a 1-year-old baby. He said his children were depressed and passed their days surviving on food that they had stored away before the government collapsed.

Under Taliban rule, Afghanistan has been battered by food and cash shortages. People have been unable to withdraw money from banks. Grocery prices have shot up. The Taliban have also looked to China for help avoiding a possible economic collapse.

Andrew Small, a senior fellow with the German Marshall Fund who studies China’s policy in Afghanistan, said the Taliban had not previously demonstrated an “obvious willingness” to hand over Uyghurs to the Chinese, though he believed their fears were legitimate.

“The lines are blurred on China’s part between who constitutes a terrorist and who constitutes someone who has simply been politically active,” Mr. Small said. “Individuals who are politically and economically connected with any activities they find problematic” are likely to be targeted, he said.

The uncertain future of Uyghurs in Afghanistan has caught the attention of Abdul Aziz Naseri, a Uyghur activist who was born in Afghanistan and now lives in Turkey. Mr. Abdul Aziz said he had compiled a list of roughly 500 Afghan Uyghurs who want to leave the country.

He shared the names and photographs of these people with The New York Times, but asked that their information be kept private. At least 73 people on the list appeared to be under the age of 5.

Shabnam, a 32-year-old Uyghur, her mother and two sisters managed to get out of Afghanistan last month. The women rushed to the airport in Kabul during the frenzied United States evacuation. Her sisters boarded one flight, her mother another. Shabnam said she was the last to leave.

In an interview, she described being separated from her husband while getting through the chaotic security lines at the airport. She was holding his passport and begged the security guards to deliver it to him. No one helped, she said.

Shabnam waited for her husband for four days, while the people around her at the airport encouraged her to leave.

She finally did — boarding a U.S. military plane with hundreds of other Afghans late last month. Her trip took her to Qatar, Germany and finally the United States, where she landed on Aug. 26. She is now in New Jersey and still trying to get her husband out of Afghanistan.

“I was happy that I got out of there, thank God,” Shabnam said. “I like it here. It’s safe and secure.”

Written by Nick Remsen, CNNMilanIf you're a millennial who grew up on a diet of BlackBerry Messenger, tabloid celebrity news (never forget Paris Hilton, Britney Spears and Lindsay Lohan crammed into Hilton's Mercedes-Benz SLR McLaren), and style icons who donned Von Dutch trucker hats and Alexander McQueen skull scarves, you may also remember Roberto Cavalli. During the aughts, the Italian fashion designer was a red carpet mainstay, dressing everyone from […]