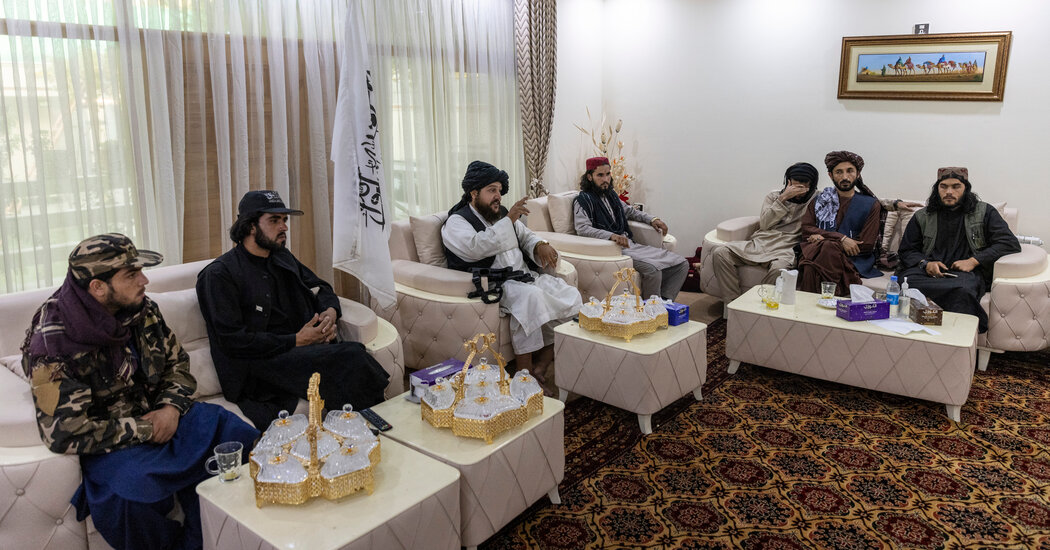 KABUL, Afghanistan — Sitting in the home of the spy chief of the fallen Afghan government, cradling a Beretta submachine gun in his lap, Mawlawi Habib Tawakol recounted how he and his fighters were surprised at how quickly they were ordered to enter Kabul on Aug. 15, even after the Taliban’s rapid advance across Afghanistan.

That morning, Mr. Tawakol’s Taliban unit arrived on the outskirts of the Afghan capital, expecting to camp out there possibly for weeks while a formal handover was negotiated. But there would be little waiting. President Ashraf Ghani and many other senior officials were fleeing, catching everyone off guard.

“That afternoon, our leadership ordered us to enter the city in order to prevent looting,” he said. The Taliban intelligence chief, Hajji Najibullah, told him and his men to rush to the headquarters of the Afghan spy agency, the National Directorate of Security, to secure equipment and documents. Prison cells, offices, security posts — all had been abandoned.

“There was no one there except a deputy director, who handed the building to us,” Mr. Tawakol said. “All the prisoners had already escaped.”

Two weeks later, the Taliban are expected to formally announce their new government as early as Thursday, including naming the insurgency’s top religious figure, Sheikh Haibatullah Akhundzada, as the supreme leader of Afghanistan. But there is still an important gap between naming a government and fully taking up its functions, as Mr. Tawakol and other Taliban officials have found.

In Kabul, as in much of the country, most important government departments, apart from street-level security, are not functioning.

The Taliban have urged officials with the former government to stay in their roles, and some have. But in the face of a looming economic crisis, including a worsening cash shortage that has put strains on the availability of fuel, food and other staples, the past two weeks have been a scramble by the Taliban to establish themselves, both in the public eye and in practice, as the country’s new governors. Much of the Afghan public remains deeply distrustful, given the harshness of the Taliban’s last government.

Although surprised by the rapid surrender of the Afghan government, the Taliban movement has been preparing to take power for more than a decade, steadily expanding its shadow government in waiting. Over the years, they have formed national commissions for sectors like health care and education, appointing officials down to the district level across much of the country.

Mawlawi Bakhtar Sharafat, who served as an official during the previous Taliban regime, has been head of the Taliban’s public works commission since its inception three years ago, in charge of things including the repair and upkeep of roads and bridges.

On Aug. 16, the day after Kabul’s fall, Mr. Sharafat was in Kandahar, on his way to inspect newly conquered infrastructure in western Afghanistan. But that night, he received an urgent message from Mawlawi Muhammad Yaqoub, a senior Taliban leader who currently functions as the executive authority.

“I was told to please go and control your ministry in Kabul,” Mr. Sharafat recounted in an interview with The New York Times. With him were some staffers from the previous administration.

When he arrived in Kabul at the public works office, whose previous minister had fled, he met with the remaining staff and reassured them with the movement’s assurance of a general amnesty, part of a campaign to induce cooperation from civil servants, security officials, and the general public.

“People should not be afraid,” he said. “We should live together.”

While much of Kabul’s elite fled the country ahead of the Taliban, a few senior officials chose to remain at their posts. Wahid Majrooh, the Afghan minister of public health, said he turned down an offer to escape with President Ghani.

“I stayed in the office and took the risk,” he said in a recent interview. “If I leave, my directors and advisers will leave.”

The morning after the militants entered Kabul, Mr. Majrooh went to his office, where he was visited by the Taliban’s provincial health commissioner from neighboring Logar Province. “He was surprised to see me,” he said. “His behavior was respectful, but he had no clear message.”

Mr. Majrooh, worried about an outbreak of violence or a mass casualty attack, wanted to ensure that his hospital network stayed open. He suggested that he and the Taliban official go and rally the staff at two hospitals in a Hazara Shiite neighborhood in western Kabul, where residents would be most fearful of the Taliban’s arrival. “He said, ‘Great idea, let’s go!’” Mr. Majrooh recalled.

For the past two weeks, Mr. Majrooh has shared his office with Mawlawi Abdullah Khan, head of the Taliban’s health commission, whose cooperation he credited with helping coax staff back to work.

“Most ministries are locked, their services are disrupted,” he said, adding that for health services, however, “90 percent of our staff have come back.”

Yet the public health ministry now faces the same imminent financial crisis as the rest of the government, and much of Afghanistan’s bank funds and other financing remain frozen by the U.S. and Western governments. The health care sector is particularly dependent on donor support; according to Mr. Majrooh, most organizations he works with have already suspended operations and halted contracts.

“We were not expecting them to stop funding so suddenly,” he said. “I get calls from hospitals that they are running out of fuel, oxygen, and electricity.”

Even as the Taliban have established control over Afghanistan’s formal institutions, its leadership has pursued more traditional methods, including an outreach by the powerful Invitation and Guidance Commission, led by Amir Khan Muttaqi. The commission’s events included a gathering of religious scholars at the Loya Jirga hall in Kabul last week, where the tricolor flags of the fallen Afghan republic remain painted on the wall behind the stage.

At the Ministry of Peace in downtown Kabul, Khalil Haqqani, uncle of the Taliban’s deputy leader, Sirajuddin Haqqani, has held a series of meetings with tribal elders, former government officials and military pilots, urging them to support the new Taliban government. Last Thursday, flanked by uniformed guards wielding American M4 carbines, Mr. Haqqani presided over a gathering that included Allah Gul Mujahed, a former member of Parliament from Kabul, who asked the audience to cooperate with the Taliban.

“All who accept this great law, which is the holy Quran, raise your hand,” Mr. Haqqani said.

In his capacity as special representative to the movement’s supreme leader, Haqqani asked participants to swear bayah, an Islamic oath of allegiance. Over the past two weeks, a succession of Afghan power brokers have taken those oaths in his presence, including Gul Agha Sherzai, the former governor of Kandahar, and Hashmat Ghani, brother of the former president.

Zabihullah Mujahid, the Taliban’s chief spokesman, said that the new government would be founded on its religious legitimacy.

“The people of Afghanistan have fought hard for 20 years for the establishment of an Islamic system,” he said in an interview with The Times at his office in Kabul last week. “We had five elections and they were all corrupt. Each time an American minister had to come and decide the result. In Islam, we have the principle of the shura to represent the people.”

Mr. Mujahid and his press team have tried to present a cooperative face to the world and to an Afghan public that is skeptical after the previous Taliban government’s harsh treatment of women and minorities during the 90s, as well as the insurgents’ violence against civilian targets during the war.

“We have many points of common interest,” Mr. Mujahid said, listing terrorism, opium production, and refugee flows as potential areas of cooperation with the West.

He said that although the Taliban would ensure a strict segregation between genders in schools and workplaces, women would be free to study and work, as well as leave the house unaccompanied.

“In the previous regime, we saw that there was not only financial corruption but moral corruption,” he said. “If we separate men and women, then people will feel free to send their wives and daughters.”

On Wednesday, Taliban officials said that the new Islamic government of Afghanistan would be announced imminently, with Sheikh Haibatullah as the supreme authority.

Still unclear was the role of a leadership shura, or council, and whether its membership would fulfill the Taliban’s promise of building an inclusive government. The question also remains of whether leaders from previous governments, such as Hamid Karzai and Abdullah Abdullah, who have remained in Kabul for talks, will be included.

In the interview, Mr. Mujahid emphasized, however, that the new government envisioned by the Taliban would not be a democracy. 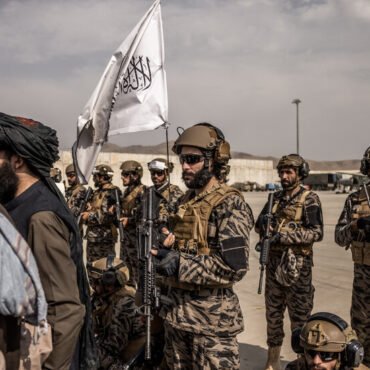 Will the World Formally Recognize the Taliban?

BRUSSELS — The Americans have left 20 years after invading, the Afghan government has dissolved and the Taliban are newly in charge of some 40 million people in one of the poorest countries, ravaged by decades of violence and upheaval. Foreign powers must now decide how to deal with an organization that remains on terrorist watch lists around the world.What happens now?Why are other countries so interested in Afghanistan’s future?Three […]