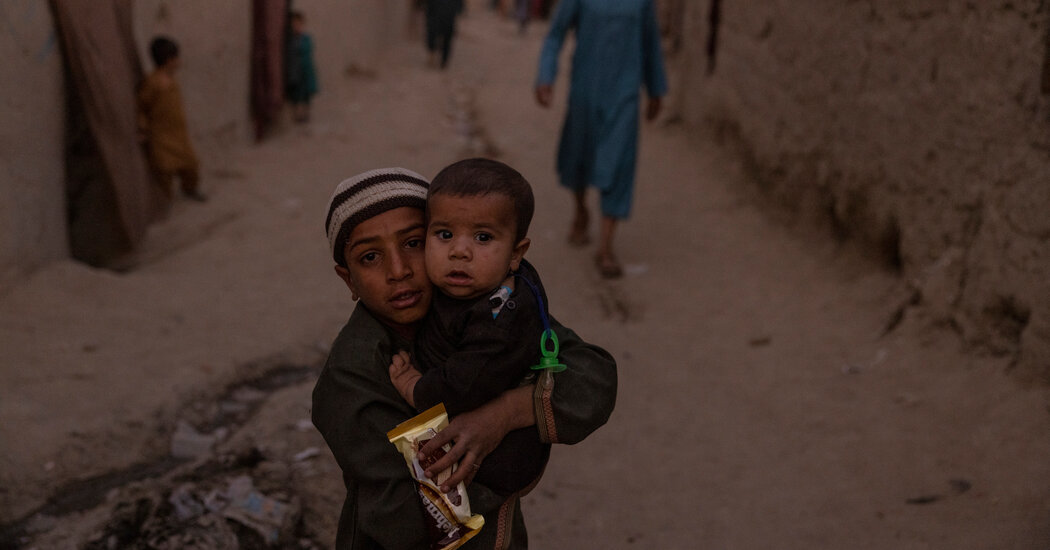 KABUL, Afghanistan — The health care system in Afghanistan is on the brink of collapse, international aid groups warned this week, threatening to deepen the country’s humanitarian crisis just as temperatures begin dropping.

Thousands of health care facilities have run out of essential medicines. Afghan doctors have not been paid in two months, with no paychecks in sight. And in recent weeks, there has been a surge of cases of measles and diarrhea, according to the World Health Organization.

For two decades, aid from the World Bank and other international donors propped up the country’s health care system, but after the Taliban seized power, they froze $600 million in health care aid.

Now, just over a month into Taliban rule, the toll is becoming clear.

“We are deeply concerned that Afghanistan faces imminent collapse of health services and worsening hunger if aid and money do not flow into the country within weeks,” Alexander Matheou, Asia Pacific director of the International Federation of Red Cross and Red Crescent Societies, said at a news conference Thursday. “Afghanistan’s looming harsh winter threatens greater misery and hardships.”

The unfolding health care crisis has underscored how quickly basic services have unraveled as international donors struggle with how to dispense badly needed aid to the country under Taliban rule.

Foreign aid once made up nearly 75 percent of the country’s public expenditures, according to the World Bank, but after the militants seized control on Aug. 15, the U.S. froze over $9 billion dollars in the Afghan Central Bank’s American accounts, and major international funders like the World Bank and International Monetary Fund paused disbursements.

They fear that the Taliban will reimpose the brutal repression of their first reign, from 1996 to 2001. Aid groups and foreign governments have talked of finding a way to funnel money and supplies into Afghanistan without placing them in Taliban hands, but until then, ordinary Afghans are paying a heavy price.

“There needs to be some solution to the financial flows into Afghanistan to ensure that at least salaries can be paid, and that essential supplies — power and water being two of them — can be procured,” Mr. Matheou said Thursday.

Last week, the United States cleared the way for some aid to flow to Afghanistan, issuing two general licenses to allow U.S. government and certain international organizations like the United Nations to engage with the Taliban to provide humanitarian assistance.

That should ease the flow of agricultural goods, medicines and other critical resources while maintaining economic sanctions against the Taliban .

“Treasury is committed to facilitating the flow of humanitarian assistance to the people of Afghanistan and other activities that support their basic human needs,” Andrea Gacki, director of the U.S. Treasury’s Office of Foreign Assets Control, said in a statement.

“Over the past 20 years, significant health gains have been made in Afghanistan in reducing maternal and child mortality, to end polio and more.” Dr. Tedros Adhanom Ghebreyesus, the director-general of the World Health Organization, said last week. “Those gains are now at severe risk.”

The International Federation of Red Cross and Red Crescent Society is looking for $38 million to fund health care and other emergency services across Afghanistan. And on Wednesday, the U.N. spokesman, Stéphane Dujarric, appealed to donors to help the organization hit its goal of $606 million to pay for humanitarian programs through the end of the year. So far, that appeal is only 22 percent funded.

Still, the international community remains deeply divided over the issue of providing aid to the Taliban-run government.

Some countries and aid organizations have demanded that the new government meet certain conditions — like guaranteeing women’s rights — in return for aid. Others have warned that making aid conditional risks plunging the country into a humanitarian disaster.

More than half a million Afghans were driven from their homes during the Taliban’s four-month military campaign this summer, and many of them are still living in makeshift camps. A drought that has enveloped much of the country has caused a dire food shortage, according to the World Food Program. And the country faces a major economic crisis with the Taliban cut off from both international banking systems and the foreign aid that propped up the previous government.

Around 18 million Afghans, almost half the population, are now in urgent need of humanitarian assistance, according to the International Federation of Red Cross and Red Crescent Societies.

On Wednesday, the World Health Organization warned that two-thirds of the roughly 2,300 health care facilities it supports have run out of essential medicines. Only about 400 are now functioning.

Those facilities, the backbone of the country’s health care system, are part of a $600 million project administered by the World Bank and funded by the U.S. Agency for International Development, the European Union and others.

Over 2,500 health facilities operated by the International Federation of Red Cross and Red Crescent Societies are also no longer working, Mr. Matheou said. More than 20,000 health workers are out of work, either because the facilities closed or their salaries were frozen.

That has stoked fears about a surge in deaths from basic medical ailments, and of a crippling brain drain as doctors look for work elsewhere or leave the country.

“Our doctors have not received their salaries for three months now,” said Dr. Mohammad Farid Rasouli, who works in the anesthesia ward at Aliabad Hospital in Kabul. For now, the hospital’s medical staff has been reporting to work each day, he said, but “if we don’t receive our salaries, there is a possibility we will leave our duties.”

Afghans across the country are feeling the pressure.

“I have a head injury and kidney problems, but don’t have money to go see the doctor,” said Noor Muhammad, 55. “If I don’t pay, no one is going to help me.”

Originally from the northern Balkh province, Mr. Muhammad has been living in Kabul in the Charahi Qambar refugee camp for 17 years. Wedged between apartment buildings and a multilane thoroughfare, the camp is the size of a city block — a patchwork of squat mud-brick houses with narrow, muddy lanes and open sewers. It houses refugees mainly from Helmand Province, in Afghanistan’s south.

By the mosque and the water pump, children ran around the dusty square, while one man was selling boiled corn and another fresh bananas and pomegranates.

Muhammad Wali, 50, was one of hundreds of people who moved to the refugee settlement from the Helmand two months ago, as fighting between the Taliban and the previous government’s forces intensified across southern Afghanistan.

For weeks his hometown, Lashkar Gah, the capital of the province, was pummeled by airstrikes from government forces and running battles between Taliban fighters and Afghan troops. Mr. Wali went north after his house was destroyed and the Taliban began instructing residents to leave the city, he said.

But he and many others in the resettlement camp have yet to find work, and they are struggling to buy basic goods as prices surge.

“People all over Afghanistan are facing famine, especially the many refugees that are living in these camps,” he said. “People here do not have the money even to buy a loaf of bread.”

Written by Nick Remsen, CNNCNN Style is one of the official media partners of Paris Fashion Week. See all coverage here.Paris-based designer Rick Owens has been called many things in his long career. An antihero, a goth, fashion's "prince of darkness." He's been labeled as such because of his proclivity for a largely noir, gray and ice-hued oeuvre, his deployment of pentagram motifs on underwear or elk antlers on furniture, […]