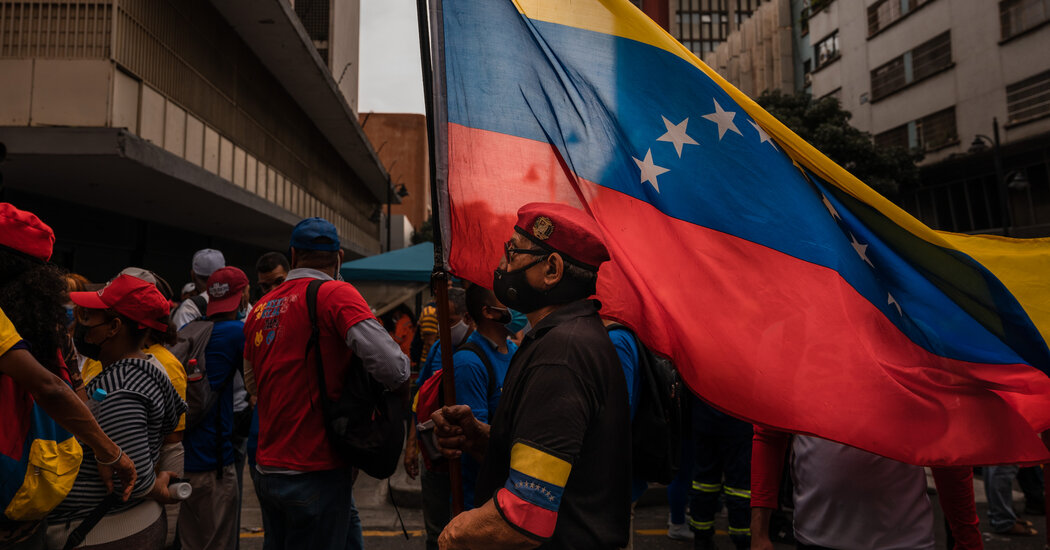 BOGOTÁ, Colombia — A rare meeting between leaders of Venezuela’s bitterly divided government and opposition is expected to result in two major agreements meant to ease the country’s complex political and humanitarian crisis.

The meeting partly reflects the economic ripple effects of Russia’s Ukraine invasion, which has reduced global oil supplies and pushed the United States to reconsider its restrictions on energy companies operating in Venezuela.

If all goes as planned, the talks, scheduled for Saturday, will lead to an agreement to transfer up to $3 billion in Venezuelan government funds frozen overseas into a humanitarian program administered by the United Nations — a concession by President Nicolás Maduro of Venezuela, who has long denied the scope of the suffering that has unfolded under his tenure.

At the same time, the United States is expected to approve a license request by Chevron Corp. to expand operations in Venezuela, according to three people familiar with the deal. The agreement could represent an important step toward allowing Venezuela to re-enter the international oil market, something Mr. Maduro desperately needs to improve the economy.

U.S. State Department officials have publicly applauded the return to negotiations between the two parties, after an earlier effort was cut off by the Maduro government last year.

But a Biden administration official familiar with the talks said that any action related to Chevron in Venezuela “is contingent on if the parties actually announce specific commitments to support the people of Venezuela.”

The official requested anonymity to be able to speak freely about the matter.

For years, Chevron and other oil companies have been prevented from large-scale operations in Venezuela by U.S. sanctions designed to starve Mr. Maduro’s government.

Following the expected accord, other companies are likely to press the United States to further lift Venezuela-related restrictions, including sanctions that ban entities in India and elsewhere from importing Venezuelan oil, said Francisco Monaldi, director of Rice University’s Latin America Energy Program.

The United States is likely to tie such actions to further concessions by Mr. Maduro. But if it does lift the sanctions, that would be an economic “game changer” for Venezuela’s authoritarian leader, Mr. Monaldi added.

“My concern,” he said of the expected Chevron license, “is that the U.S. seems to be giving a lot for very little.”

A Chevron spokesman would not comment on the expected agreement.

The meeting between the Venezuelan government and opposition leaders, held in Mexico, is the outcome of more than a year of conversations between the two sides about how to address the country’s economic, political and humanitarian crisis, which dates to at least 2014.

But the talks also are part of a larger softening of U.S. policy toward Venezuela, which many analysts say is related to a growing global need for non-Russian oil sources. Venezuela is believed to hold the largest oil reserves of any country.

The United States is a supporter of the Venezuela dialogue, not a participant.

The Biden administration official said that any action related to Chevron in Venezuela was not a response to energy prices.

“This is about the regime taking the steps needed to support the restoration of democracy in Venezuela,” the person said.

Any new license would be time-limited and would prevent Venezuela from receiving profits from the oil sales by Chevron, the official added, explaining that the Biden administration “would retain the authority to amend or revoke authorizations should the Maduro regime fail to negotiate in good faith.”

For years, the Trump administration tried to weaken Mr. Maduro through sanctions and isolation, recognizing the opposition leader Juan Guaidó as president and pulling Washington’s top diplomats out of Caracas.

The Biden administration has opted for more engagement.

In June, the American ambassador to Venezuela, James Story, who is now based in neighboring Colombia, flew to Caracas to meet with government and opposition leaders. In October, the United States granted clemency to two nephews of Mr. Maduro’s wife in exchange for seven Americans held captive in Venezuela. The nephews had been sentenced to 18 years in prison for conspiring to smuggle cocaine.

It would take years for Venezuela’s neglected oil infrastructure to have an impact on the global market. But with no sign that tensions between Russia and the West could ease soon, some leaders believe the wait could be worth it.

“I think energy was one of the things that made it possible, perhaps politically, for Biden to take the rather bold step of communicating directly” with Mr. Maduro’s government, said Phil Gunson, an analyst with the International Crisis Group who has lived in Venezuela for more than two decades.

But he cautioned that the American softening on Venezuela predated the war in Ukraine.

“Energy is a factor” in the strategy shift, he said, but “it’s not the only factor.”

Venezuela was once among the most affluent countries in Latin America, its economy buoyed by oil. But mismanagement and corruption by leaders claiming socialist ideals plunged the economy into disarray, while Mr. Maduro and his predecessor, Hugo Chávez, gutted its democratic institutions.

The situation has prompted the largest cross-border migration crisis in the Western Hemisphere, with more than 7 million Venezuelans — a quarter of the population — fleeing, according to the United Nations. Recently, a record number of Venezuelans have arrived at the U.S. border, most of them trekking through a harrowing jungle called the Darién Gap to get there.

The talks in Mexico are supposed to be part of a series of meetings between the Venezuelan government and opposition. Much of the opposition hopes that political concessions will be next on the agenda.

Mr. Maduro is focused on getting American sanctions lifted, which would help him improve the economy — and perhaps win a presidential election already slated for 2024.

The Venezuelan opposition has long said its goal is to push Mr. Maduro to set free and fair conditions that would give them the opportunity to oust in him in that election.

Mr. Guaidó recently called that vote “the door to democracy, freedom and the reunion of the family.”

In the past, Mr. Maduro has controlled the vote by banning many opposition figures from political participation, jailing others and co-opting many political parties. He holds elections to project a veneer of legitimacy.

Speaking on state television about the Mexico talks this week, Mr. Maduro said he wanted to make it clear: “Nobody is going to impose anything on us, not today, not tomorrow, not ever.”

The United States still recognizes Mr. Guaidó as the country’s president, though his global influence has fallen significantly after a bid to support him failed to oust Mr. Maduro.

Mr. Monaldi, the energy expert, said the Chevron deal was not merely symbolic — within two years, the company could be pumping more than 200,000 barrels a day in Venezuela, adding to the approximately 765,000 barrels pumped daily today, according to Argus, an industry monitor.

For the United States and for the opposition, the talks are a gamble.

On the one hand, simply getting Mr. Maduro to negotiate is a victory, and the $3 billion humanitarian deal could be a major step toward alleviating suffering.

On the other hand, said Mr. Gunson, the aid and the Chevron deal could improve economic conditions, lifting Mr. Maduro’s popularity.

Still, he hasn’t given an inch on the political front.

“That’s why there’s so much nail biting for the people in the administration who are pushing this policy,” said Mr. Gunson. “Because if Maduro essentially says, ‘Thank you very much,’ and doesn’t offer any concessions, then they’re going to look pretty foolish.”

Changwon, South Korea CNN  —  With a blinding yellow flash and a concussion that shakes bones, K9 self-propelled howitzers launch artillery shells onto a hill that’s just been hit by rockets fired from helicopters. Then K2 tanks roar in, speeding up roads and firing as they go. This is part of DX Korea, a four-day South Korean defense expo held in September at a firing range in Pocheon, about 30 kilometers (18.6 miles) from the North Korean border. The display […]