At Pro-Taliban Protest, a Symbol of America’s Lost Influence: Hundreds Dressed in Burqas 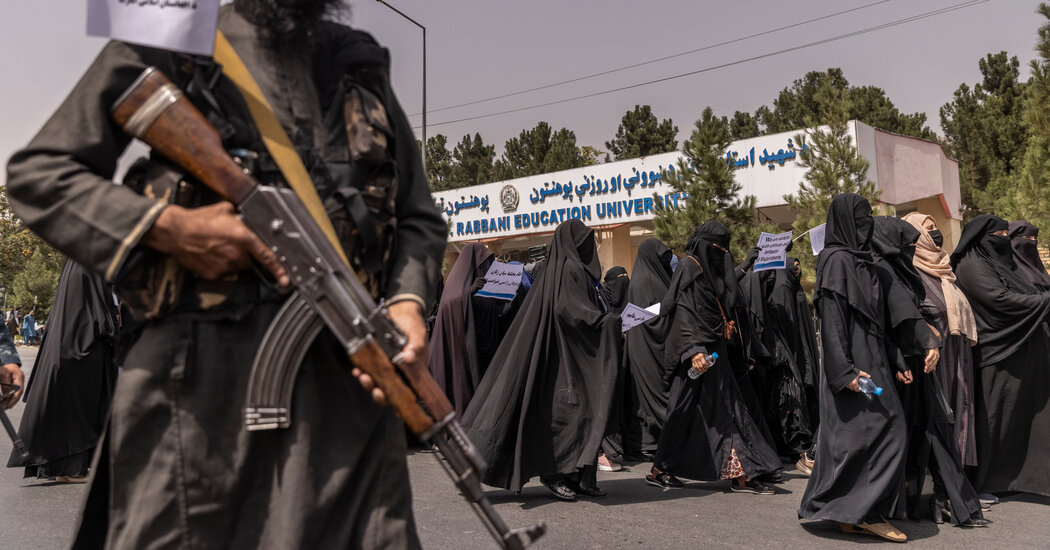 Hundreds of women, many wearing full-length burqas, their faces veiled, filled the auditorium of a Kabul university on Saturday holding signs — many of them in English — in support of the Taliban and its strict interpretation of Islam, including separate education for men and women.

Reporters on the street near Saturday’s march were kept away from the protesters by Taliban fighters armed with automatic rifles and were not allowed to speak with any of the women. Later attempts to reach the participants through social media or the university went unanswered.

The demonstration, held on the 20th anniversary of the Sept. 11 attacks, served as a stark reminder of how despite two decades and more than $780 million spent promoting women’s rights, after the departure of American forces last month, the women of Afghanistan could be thrown back decades, if not centuries.

When the Taliban governed Afghanistan from 1996 to 2001, it barred women and girls from holding most jobs and going to school, and practically made them prisoners in their own homes. Women were forced to wear the burqa, a garment that covers them from head to toe, including often their eyes. Its use to erase the appearance of women from public life was seen in the West as a symbol of Taliban oppression.

The demonstration with large numbers of women wearing the garment on the 9/11 anniversary was a sharp rebuke to the United States and its allies, which long cited women’s rights as a reason for continuing the war in Afghanistan long after the Taliban was toppled, Al Qaeda was defanged and Osama bin Laden was assassinated.

Since the United States and its allies departed Kabul on Aug. 30, leaving Afghanistan under the control of the Taliban, the country’s women have been at the forefront of protests demanding that their rights continue to be respected.

Taliban leaders have responded to those protests with violence, beating participants, including women, and insisting that anyone taking to the streets for a public demonstration must first be granted approval from their caretaker government.

The Ministry of Education of the acting Taliban government said that the women at Saturday’s pro-Islamist demonstration had asked for and received their permission to hold the event.

“Unlike other demonstrations in Kabul, this is the second all-women protest which was nonviolent and the journalists were allowed to cover the protest freely,” the ministry said in a statement.

“The women also welcomed the scheme of separate classes for boys and girls in all universities and institutes and pledged that they would be working for strengthening the Islamic Emirate in Afghanistan,” the ministry said.

But the presence of Taliban fighters, the efficiency with which images of the event and official statements were disseminated and its timing — on Sept. 11 — suggest that the demonstration was not just approved by the Taliban but potentially orchestrated by it.

Standing at a podium decorated with large white flags, some of the women taking part in Saturday’s demonstration criticized the recent anti-Taliban protests, insisting that women should go along with the Taliban’s strict policy that women wear a full-body covering.

One woman said anti-Taliban protesters joined last week’s marches just to become famous in the West, according to a recording obtained by The New York Times.

She acknowledged that those women held important roles in society, including doctors and teachers, but said they do not represent all of the women of Afghanistan.

After the women filed out of the auditorium, they held a short march, chanting in support of the Taliban and brandishing signs, including several in English that read, “Women who left Afghanistan cannot represent us,” and “Our rights are protected in Islam.”

Taliban fighters cleared traffic so that rented buses could transport the women from the university grounds.

Even before the Taliban returned to power, Afghanistan placed near the bottom of every list when it came to protections for women, and at the top in terms of the need for shelters, counseling and courts that could help keep women safe.

Nevertheless, after 20 years of Western support, girls and women made up about 40 percent of all students in the country. Women joined the military and the police, and held political office. Some became internationally recognized singers, competed at the Olympics and on robotics teams, climbed mountains and more — all things that were nearly impossible at the turn of the century.

But many of those women, seeing no future for themselves, have fled the country. A women’s soccer team from Herat made its way to Italy, five members of the Afghan girls’ robotics team landed in Mexico, and Zarifa Ghafari, one of Afghanistan’s first female mayors, arrived in Germany, where she recently met with Chancellor Angela Merkel.

Ms. Ghafari expressed outrage at the images of the women at the university in Kabul on Saturday. “This isn’t our culture!” she wrote on Twitter. “Afghan women aren’t part of extremism, don’t make them savage, don’t impose ISIS culture on us!”

When the Taliban announced their caretaker government on Tuesday, leaders in the West noted that it failed to live up to promises that the group would be more inclusive of Afghanistan’s diverse ethnic groups and religious minorities. It was also made up entirely of men, breaking with another pledge by Taliban leaders.

Hours before the acting government was announced, hundreds of Afghans, women among them, took to the streets to peacefully demand that their rights be respected under their new leaders. Taliban fighters used rifle butts and sticks to violently break up the protest, sending participants fleeing.

On Wednesday, two Afghan journalists were detained and violently assaulted for covering a protest in Kabul. Photos showed the backsides of both reporters covered with bruises and gashes from being whipped repeatedly with cables, sparking an international outcry.

Reporting was contributed by Sami Sahak and Wali Arian 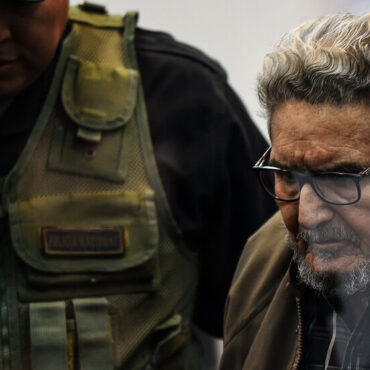 Abimael Guzmán, the founder and leader of the Shining Path guerrilla movement, which spread terror across much of Peru in the 1980s and ’90s, died on Saturday in Peru. He was 86.Mr. Guzmán died in a maximum-security prison in the Callao naval base in Peru, where he was serving a life sentence, prison officials said. They said he died of health complications but did not specify an exact cause.An estimated […]