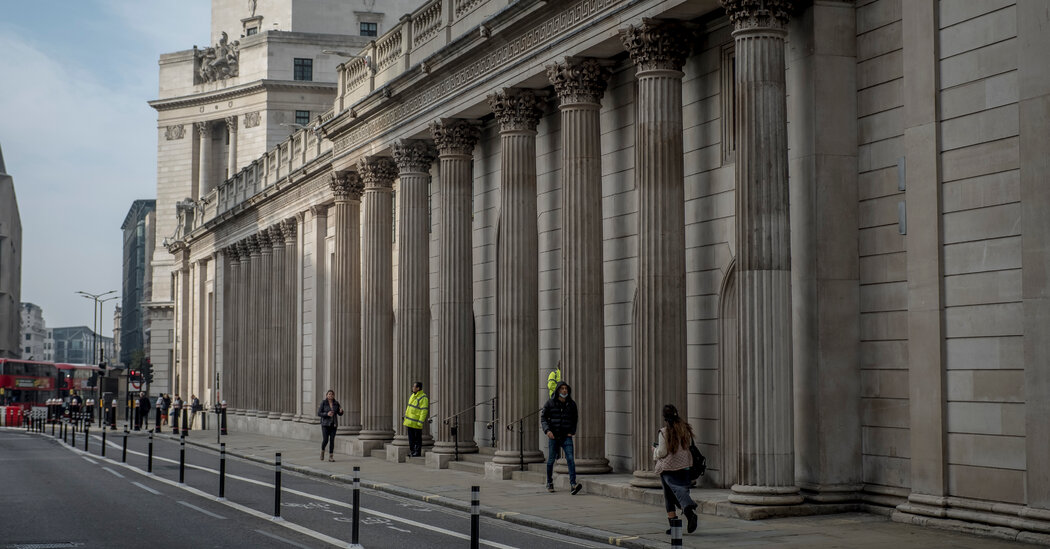 LONDON — The Bank of England has stopped displaying art depicting several former governors and directors after a review found they were connected to the trans-Atlantic slave trade.

Oil paintings and busts of seven leading figures at the central bank between 1698 and 1814 — James Bateman, Robert Bristow, Robert Clayton, William Dawsonne, Gilbert Heathcote, William Manning and John Pearse — have been removed after it was established they had links to slavery, the bank said in a statement Friday.

The move was the latest in a difficult reckoning taking place at museums, galleries and longstanding institutions in Britain and other European countries that have begun reframing their exhibitions to more explicitly acknowledge links to slavery and colonialism. Criticism that many had not done enough escalated after the Black Lives Matter protests around the world last summer following the murder of George Floyd by a police officer in the United States.

The British Museum in London last year altered several exhibitions to highlight links to colonialism and slavery. A museum dedicated to Jane Austen included details about her family’s ties to the slave trade. And scholars at Oxford University have boycotted one of its colleges because it has a statue of the British imperialist Cecil Rhodes on its facade.

The Bank of England, which has its own museum, said it had appointed a researcher to “explore the Bank’s historic links with the trans-Atlantic slave trade in detail,” adding that the information would be used to inform future displays about the institution’s history. The central bank apologized last year for the role of some top officials in the slave trade.

In the review, staffers investigated whether the subjects of artworks had direct links with West Indian merchants who used enslaved people on plantations or other companies associated with the slave trade. Figures were also crosschecked with a database of British slave owners compiled by University College London.

Kehinde Andrews, professor of Black Studies at Birmingham City University, downplayed the significance of removing the artworks, given the bank’s crucial role in facilitating an economic system of which slavery was a part.

“You cannot separate the Bank of England from slavery,” he said, adding that focusing on the past of a few directors was “tokenistic nonsense.”

“The Bank of England should be getting involved in saying: how do we redistribute this wealth that’s been stolen back to the people who need it?” Professor Andrews said, referring to measures like reparations.

The move came after the Bank of England said last month that it had not made sufficient progress in creating an ethnically diverse and inclusive workplace. Another review, commissioned last fall, concluded that nonwhite employees suffered disparities in promotion opportunities compared to their white colleagues.

Between 2014 and 2019, employees from ethnic minorities were 25 percent more likely to leave the bank in a given year than white employees. They were also more likely to receive lower performance ratings — which were also linked to lower bonuses.

“The experience of colleagues with different ethnic backgrounds has not reflected the kind of institution we want to be,” Andrew Bailey, the governor of the Bank of England, said after the review’s publication, adding that the institution would make diversity and inclusion a priority. Reforms included higher targets for the representation of Black and minority ethnic employees at senior levels, the bank said.

Taranto, Italy (CNN) — The Puglia region envelops the "heel" of the boot-shaped Italian peninsula. Laden with olive groves, surrounded by clear, sparkling water and speckled with charming, historic towns and villages, its rustic appeal has made it an increasingly popular destination for tourists.The region's list of must-see attractions includes the UNESCO World Heritage sites of Alberobello and Castel del Monte, the verdant national park of Gargano, the azure sea […]