It’s been almost three years since a Banksy painting partially shredded itself in front of shocked onlookers, moments after selling for over £1 million ($1.4 million) at a London auction.

Now, “Love is in the Bin” (renamed from “Girl with the Balloon”) is up for sale again. And Sotheby’s auction house estimates that it could fetch up to £6 million ($8.3 million) when it goes under the hammer next month — six times its previous value.

The artwork remains half shredded in its frame, which once concealed a mechanism that Banksy later implied had malfunctioned, prohibiting the work from falling like scraps to the floor.
“It was a big moment because nothing like that had been done before,” said art historian, author and co-founder of Artful, Matthew Israel, in an email interview. The idea of a self-destructing artwork was, he added, “entirely at odds with the aims of the auction house, where the condition of an artwork is paramount and the knowledge and expertise about it is core to its authority and value.”

Banksy’s ‘Love is in the Bin’ at Sotheby’s in 2018, after the painting passed through a hidden shredder. Credit: Tristan Fewings/Getty Images for Sotheby’s

So, was the self-shredding artwork a penetrative critique of eye-popping prices in an art market that values institutions over artists, or just an orchestrated PR stunt?

This debate surfaced immediately after the October 2018 auction, and was fueled by events that kept the painting in the news months later, including videos that Banksy released on social media like breadcrumbs that invited more speculation about his intentions. A Sotheby’s press statement says the artwork has thus far been the subject of 30,000 news stories (and now, one more).

According to Israel, the answer is a bit of both.

“It’s ingenious PR that allowed Bansky to continue to be part of the conversation… and it also provoked important questions about artists and the art market — as Banksy has done now for many years,” he said.

The anonymous street artist has staged several stunts that questioned the assigned value of his work. In 2013, he sold original artworks in New York’s Central Park alongside other street vendors. Priced at only $60, the works drew little interest from passersby, resulting in just $420 in sales, according to a video he later released.

And he’s far from the first artist to employ subversive tactics to criticize the art world. After the self-shredding incident, historian Preminda Jacob compared the stunt to work by past artists like Marcel Duchamp, who famously exhibited an upside-down urinal to challenge the “art market’s intellectual pretenses.”

But in the case of “Love is in the Bin,” Banksy’s rebellious cachet has come into question, since it is Sotheby’s that ultimately benefited from the chaos around the sale. The auction house maintains that its staff had no idea of what the artist had planned, with a spokesperson telling CNN over email: “We had no prior knowledge of this event and were not in any way involved.” But Israel, like many others, has his suspicions.

“I still think there is more to the story,” he said. “It’s unclear how (Sotheby’s) would possibly not have noticed that the shredder was embedded in the frame. Some have commented that the unusual weight of the frame would have undeniably raised concerns, for one. And what does Sotheby’s professed ignorance say about how they inspect the condition of other artworks that people bid on and purchase?”

The identity of the winning bidder remains a mystery as well, though Sotheby’s has described the buyer as a female collector from Europe and a long-standing client of the auction house.

A few months after the 2018 auction, the Frieder Burda Museum in Baden-Baden, Germany, became the first public space to display the artwork. It is currently on tour ahead of next month’s sale, starting in London this weekend then moving on to Hong Kong, Taipei and New York.

Onlookers at a Sotheby’s auction react as Banksy’s artwork is shredded in 2018. Credit: Banksy

Banksy, meanwhile, has remained prolific throughout the pandemic, leaving spray-painted rats in face masks on London Underground trains and, more recently, embarking on a “spraycation” around British seaside towns. This spring, his work set a new auction record when the painting “Game Changer” — a tribute to health care workers that he donated to a hospital in Southampton, UK — raked in £16.7 million ($23.1 million) at Christie’s in London.

“What’s so great and enduring about Bansky’s works is they question so many assumptions of the art world, from the importance of individuality and biography, to the appropriate place of art, or the value of art, or the fetishization of the poor and art of ‘the street,'” Israel said.

In the case of “Love is in the Bin,” he added, Banksy questions “class and value, and the rarefied domains of the rich, and conspicuous consumption.” 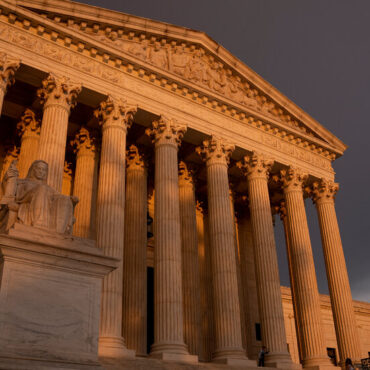 The Supreme Court opinion allowing Texas to ban nearly all abortions was different from most major rulings by the court.This one came out shortly before midnight on Wednesday. It consisted of a single paragraph, not signed by the justices who voted for it and lacking the usual detailed explanation of their reasoning. And there had been no oral arguments, during which opposing lawyers could have made their cases and answered […]