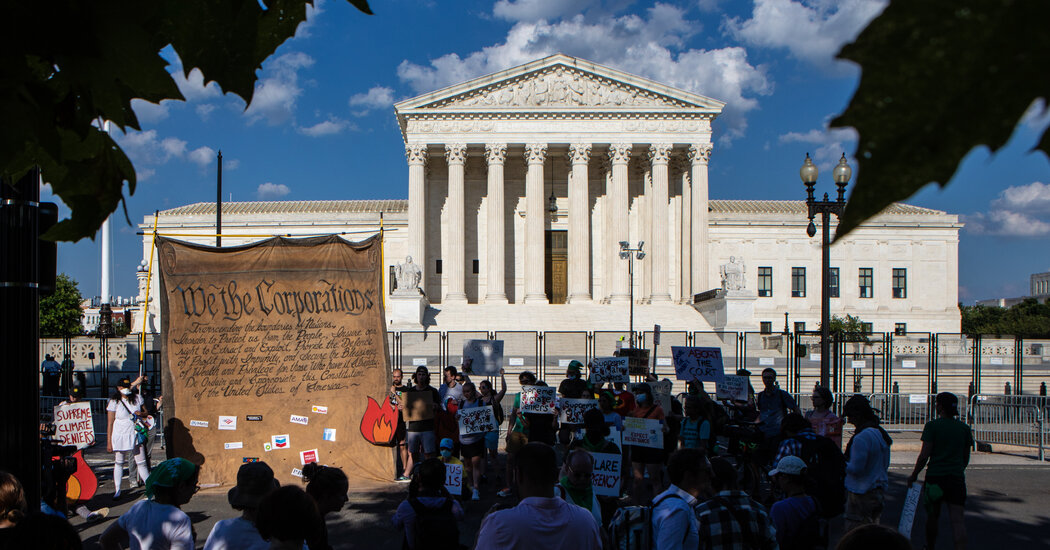 A few weeks ago, I asked Adam Liptak — The Times’s Supreme Court correspondent — to preview the major cases that would make up the end of the court’s term. Adam was prophetic, correctly forecasting every big ruling. Today, he returns to the newsletter, answering my questions about the behind-the-scenes atmosphere at the court.

David: The last few months have been among the most unusual in the Court’s modern history — a major leak followed by an abortion decision that, as you’ve written, will change American life in major ways. Inside the court, do you think things also feel different?

Adam: The Supreme Court’s building has been closed to the public since the beginning of the pandemic. Then, not long after the leak in early May of a draft of the opinion that overruled Roe v. Wade, the courthouse was surrounded by an eight-foot fence. Always cloistered and remote, the court is now impenetrable.

The release of the decision in the abortion case highlighted another way in which the court has withdrawn from public scrutiny. For unexplained reasons, the justices have stopped announcing their decisions from the bench, abandoning a tradition that is both ceremonial and illuminating. In the old days, the author of the majority opinion would give a quick and conversational summary of the ruling that could be extremely valuable for a reporter on deadline and, by extension, for members of the public trying to understand a decision.

More important yet were oral dissents, reserved for decisions that the justices in the minority believed were profoundly mistaken. In ordinary times, one or more of the three liberal justices who dissented in the abortion case would have raised their voices in protest. These days, the court makes do with posting PDFs of its decisions, robbing the occasion of ceremony, drama and insight.

So the lawyers who argued the cases and the reporters covering the court find out about decisions the same way everybody else does — by refreshing their browsers. But the justices have returned to the courtroom for arguments, haven’t they?

Yes, they have taken a different approach with arguments. After hearing them by telephone for much of the pandemic, the justices returned to the bench in October. Reporters with Supreme Court press credentials were allowed to attend and the public could listen to live-streamed audio on the court’s website. It is not clear why opinions could not be announced in similar fashion.

I haven’t been to the courthouse since the last argument of the current term, on April 27, when Chief Justice John Roberts grew emotional in saying farewell to a retiring colleague, Justice Stephen Breyer. But there is every reason to think that the leak, the investigation it prompted, the controversy over Justice Clarence Thomas’s failure to recuse himself from a case that intersected with his wife’s efforts to overturn the election and the justices’ very real security concerns have made the court an unhappy place.

In remarks in May, not long after the leak, Justice Thomas reflected on how things had changed at the court since an 11-year stretch without changes in its membership before the arrival of Chief Justice Roberts in 2005. “This is not the court of that era,” Justice Thomas said, adding: “We actually trusted each other. We may have been a dysfunctional family, but we were a family.”

A less collegial court seems like it could be especially problematic for the three liberal justices. There are now five Republican-appointed justices who are even more conservative than Roberts. If the court is a less collaborative place, I would imagine it gives the justices in the minority — both the liberals and, in some cases, Roberts — less ability to shape decisions.

Yes, though it’s possible to overstate the power of collegiality. Justices cast votes based on the strength of the relevant arguments and the desired outcomes, not on how likable their colleagues are.

The justices say there is no vote-trading across cases, and I believe them. On the other hand, there are certainly negotiations within cases. It seems tolerably clear, for instance, that Justices Breyer and Elena Kagan shifted positions in one part of the 2012 case that upheld a key portion of the Affordable Care Act to make certain they would secure Chief Justice Roberts’s vote on another part.

Justices may well be prepared to narrow or reshape a draft opinion that seeks to speak for a five-justice majority in exchange for a vote. But once the author has gotten to five, the value of another potential vote plummets. It is that dynamic that must worry the court’s liberals.

On Thursday, Justice Breyer officially retired and helped swear in his replacement, Justice Ketanji Brown Jackson. How do the justices typically welcome a new member?

When a new justice joins the Supreme Court, tradition requires the second-most junior justice to arrange a little party. In 2006, for instance, when Justice SamuelAlito came on board, that task fell to Justice Breyer, who knew his new colleague to be a Phillies fan. Before dessert was served, Justice Breyer introduced a special guest: the Phillie Phanatic, the team’s mascot.

This year, Justice Amy Coney Barrett is the second-most junior justice and will presumably be in charge of the welcoming celebration for Justice Jackson.

And now that the court is on a break until October, what do the justices usually do?

They often teach courses in exotic places. In 2012, for instance, after voting to uphold the Affordable Care Act, Chief Justice Roberts left for Malta to teach a two-week class on the history of the Supreme Court. “Malta, as you know, is an impregnable island fortress,” he said. “It seemed like a good idea.”

More about Adam Liptak: He started his Times career as a copy boy in 1984, fetching coffee for editors and occasionally writing. After law school and a stint at a Wall Street law firm, he returned to the paper in 1992, joining its corporate legal department before moving to the newsroom as a reporter a decade later. He reads a lot and plays a lot of poker.

More on the court

The Sunday question: Is Roe’s fall transforming the midterms?

KOROPY, Ukraine — Four men tugged at long strips of fabric to lift a coffin out of the gaping hole in the backyard of a small house. They flung the lid open to reveal the moldy corpse of Oleksiy Ketler, who had been killed instantly by shrapnel when a mortar fell on the road in Koropy, a village outside Khavkiv in northeastern Ukraine, in March.Mr. Ketler, a father of two […]