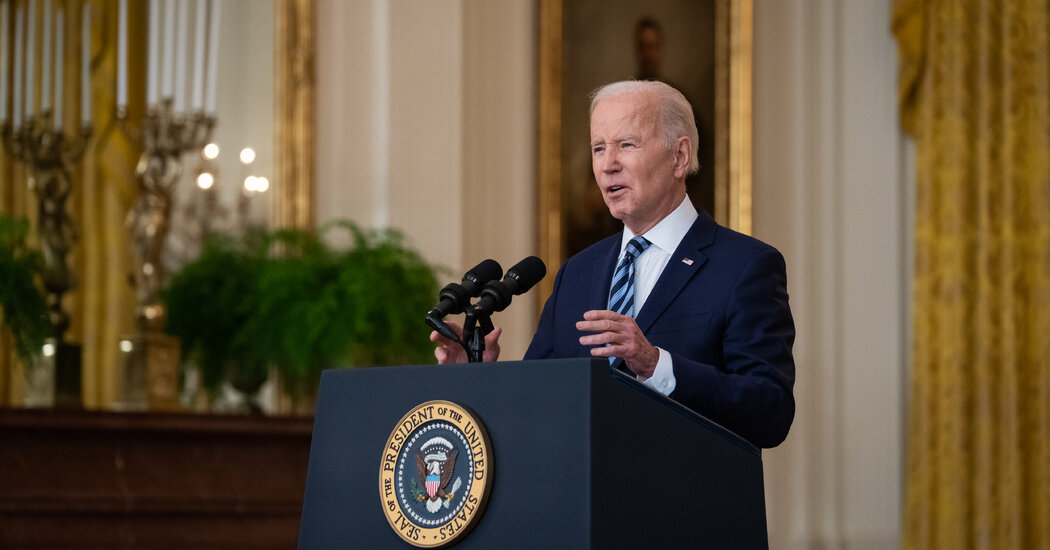 WASHINGTON — President Biden on Thursday denounced President Vladimir V. Putin of Russia and his “sinister vision for the future of our world,” vowing that Mr. Putin and his country would pay as the United States imposed a new round of economic sanctions over Russia’s invasion of Ukraine.

“Putin is the aggressor. Putin chose this war,” Mr. Biden said in brief remarks from the White House. “And now he and his country will bear the consequences.”

Just hours after Russian missiles and bombs began raining down on Ukraine’s cities, opening the first major land war in Europe in more than 70 years, Mr. Biden lashed out at the Russian leader in language reminiscent of Ronald Reagan’s 1983 speech about the Soviet Union, in which the former president decried the “aggressive impulses of an evil empire.”

On Thursday, Mr. Biden said: “Now, the entire world sees clearly what Putin and his Kremlin allies are really all about. This was never about a genuine security concern on their part. It was always about naked aggression, about Putin’s desire for empire, by any means necessary.”

Mr. Biden said he had authorized sending more troops to Eastern European countries in the NATO alliance. While he vowed again that American troops would not engage with Russia in Ukraine, he said that the United States would come to the aid of its NATO allies if Russia moved beyond Ukraine’s borders.

“The United States will defend every inch of NATO territory with the full force of American power,” he said.

The United States has cut off Russia’s top banks and some of its largest companies from the Western financial markets, Mr. Biden announced, and has restricted exports of technology to Russia. He said the economic actions would vastly degrade Russia’s ability to thrive in the weeks, months and years ahead.

Mr. Biden also said the United States had frozen trillions of dollars in Russian assets, including funds controlled by Russian elites and their families, seeking to make them pay for what Mr. Biden called “a brutal assault on the people of Ukraine without provocation, without justification, without necessity.”

The president did not order economic sanctions directed at Mr. Putin himself, and he refused to answer questions about that decision. And he said European allies had resisted taking further action to block Russia from accessing a global financial network known as Swift, noting that “right now, that’s not the position that the rest of Europe wishes to take.”

Mr. Biden was defensive about his strategy — laid out publicly again and again in recent weeks — to prevent a Russian invasion by threatening Mr. Putin with severe sanctions. In his remarks on Thursday, Mr. Biden denied that the strategy had failed, despite the full-scale assault underway in Ukraine.

“No one expected the sanctions to prevent anything from happening,” Mr. Biden told reporters.

But Mr. Biden and his top aides have been emphasizing deterrence for weeks. On Feb. 11, Jake Sullivan, Mr. Biden’s national security adviser, said that “the president believes that sanctions are intended to deter.” Six days later, Secretary of State Antony J. Blinken said he was at the United Nations “not to start a war, but to prevent one.”

Asked on Thursday if the administration had thought the strategy to use sanctions could have prevented the Russian attack, Daleep Singh, a deputy national security adviser, told reporters that the economic penalties usually swayed leaders because of the impact on their people’s living standards.

“In this case, Putin made the wrong choice,” Mr. Singh said.

Mr. Biden seemed to shift his reasoning for using the economic penalties, predicting they would squeeze Russia’s economy over time and force Mr. Putin to pull back his military forces before too much damage was inflicted on Ukrainians.

“This is going to take time,” Mr. Biden said. “He’s going to test the resolve of the West to see if we stay together and we will.”

Mr. Biden acknowledged that the conflict in Eastern Europe would be felt at home. White House officials have warned for days that the economic penalties against Russia could raise oil prices, even as the United States grapples with a spike in inflation.

“I will do everything in my power to limit the pain the American people are feeling at the gas pump,” he said. “This is critical to me. But this aggression cannot go unanswered.”

“America stands up to bullies,” he added. “This is who we are.”

But even as Mr. Biden suggested that it was “highly unlikely” that Americans would feel economic hardship “for a long time” as a result of the sanctions, he also acknowledged that those sanctions would not immediately prevent Mr. Putin from continuing his military assault.

“The sanctions we imposed have generated two thirds of the world joining us. They are profound sanctions,” he said. “Let’s have a conversation in another month or so to see if they’re working.”

Mr. Biden’s speech made clear that the purpose of the sanctions had changed in the wake of Mr. Putin’s invasion, according to William B. Taylor Jr., a longtime diplomat who served as acting ambassador to Ukraine under the Trump administration.

But Mr. Taylor agreed with Mr. Biden’s assessment that those economic penalties were not likely to provide an immediate reprieve for those on the ground. “The Ukrainians are in this for the long haul,” Mr. Taylor said.

Richard Fontaine, the chief executive of the nonpartisan Center for a New American Security and a former foreign policy adviser to Senator John McCain, said “the effort to deter an invasion has failed.” But he added that the economic penalties Mr. Biden announced on Thursday could still be an important tool “by imposing the cost on Putin.”

“What you try to do is at least reduce the appetite he will have for trying to do these kinds of things,” Mr. Fontaine said. “Although I’m skeptical of that too.” He added that Mr. Biden would face a choice in the coming weeks over whether he should support a potential insurgency in Ukraine.

The administration would most likely keep its focus on NATO countries near Ukraine, where Mr. Biden is deploying American troops, Mr. Fontaine said.

“So much turns on this uncertainty of what endgame they’re aiming at here,” he said of Mr. Putin.

Mr. Biden reiterated on Thursday that American troops would not fight in Ukraine but warned that if Russian forces moved into NATO ally nations, “we will be involved.”

“The only thing that I’m concerned of is if we don’t stop him now, he’ll be emboldened,” the president added.

Earlier on Thursday, Mr. Biden met with his national security team in the Situation Room. Officials said they discussed “how we will hold Russia accountable for its unprovoked and unjustified attack on Ukraine.” He also met by video with leaders of the Group of 7 nations in an effort to coordinate the global response.

Mr. Biden had for weeks threatened severe sanctions that could cripple Russia’s economy, in the hopes that Mr. Putin would back down from plans to invade his neighbor. Earlier this week, Mr. Biden authorized the beginning of those sanctions when the Russian leader declared his intention to wage war.

But the president and European allies held back the most aggressive sanctions and warned Mr. Putin that the punishment would increase if his tanks rolled across Ukraine’s border.

In his speech on Thursday, Mr. Biden said the new actions would go further, in part by imposing restrictions intended to cut off Russia’s access to technology like semiconductors, computers, lasers and telecommunications equipment

The goal is to curtail or even cripple industries which Mr. Putin values, including defense, aerospace and shipping. The new restrictions would prohibit the sale to Russia of underlying technologies that are manufactured outside of the United States but are based on American technologies or equipment.

Such products can no longer be exported to Russia, he said. 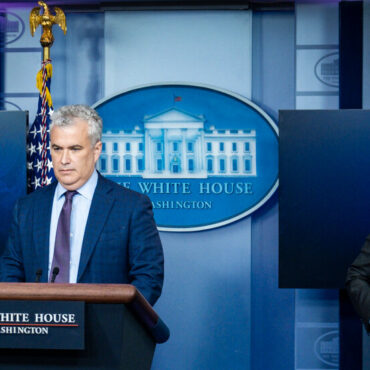 The White House Is Mulling a New Pandemic Strategy

The White House, intensifying its efforts to develop a new coronavirus strategy, is evaluating a blueprint by outside experts whose recommendations include stronger air filtration systems in public buildings, billions of dollars in research and a major upgrade to the nation’s public health system.The team of more than two dozen experts was led by Dr. Ezekiel Emanuel, a University of Pennsylvania bioethicist who advised President Biden’s transition team. The group […]