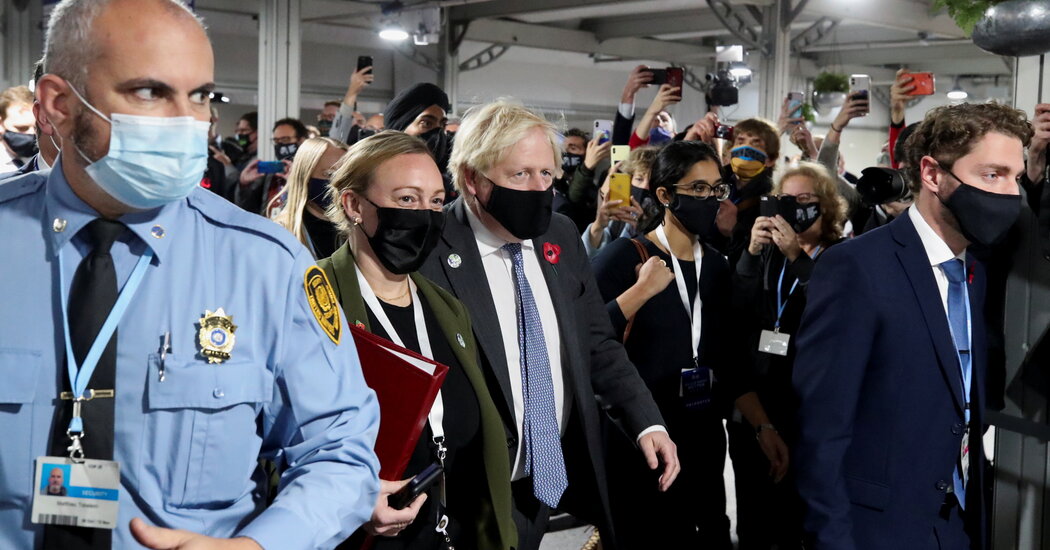 GLASGOW, Scotland — Prime Minister Boris Johnson rushed back to the United Nations’ climate summit on Wednesday in a last-ditch effort to persuade countries to make more meaningful pledges to curb global warming. But his splashy return to the global stage was all but eclipsed by a mushrooming scandal over the lucrative business dealings of lawmakers from his Conservative Party.

Mr. Johnson is not the only world leader whose global ambitions have been swamped by domestic distractions. Some, like President Biden, were hamstrung by political battles back home. Others, like President Xi Jinping of China, were no-shows as they struggled with the pandemic and other challenges.

But as the host, Mr. Johnson’s split-screen moment was especially unforgiving: Rather than draw praise, as he had hoped, for his diplomacy on climate change, he has endured a skein of unflattering revelations about Conservative members of Parliament. The most recent embarrassment was a report that a former attorney general did legal work for the British Virgin Islands from his Westminster office, in violation of House of Commons rules.

On Wednesday, Mr. Johnson tried his best to change the subject.

“We need to pull out all the stops if we are to do what we came here to do,” he said at a news conference before the final two days of the climate conference, known as COP26. Mr. Johnson insisted a landmark deal was in reach, though he warned that several countries were falling short of necessary pledges.

“Will you help us grasp that opportunity or will you stand in the way?” he said. “The risk of sliding back would be an absolute disaster.”

Even in Glasgow, Mr. Johnson faced as many questions about the scandal as he did about his efforts to combat climate change. He was asked whether it was appropriate for lawmakers to put their private interests ahead of their constituents (he said it was not) and whether he would apologize for the damage to the country’s reputation (he did not). Onstage, trying to project statesmanship to a global audience, he instead found himself defending Britain’s honor.

“I genuinely believe the U.K. is not remotely a corrupt country,” Mr. Johnson said, “nor do I believe our institutions are corrupt.”

The latest politician to come under scrutiny for moonlighting is Geoffrey Cox, a lawyer who is defending the British Virgin Islands in a corruption investigation brought by the British government. While Mr. Cox is not barred from practicing law, the Times of London published a video that suggested he was advising his clients while taking breaks to cast votes in Parliament.

The deputy head of the opposition Labour party, Angela Rayner, said she had referred Mr. Cox’s case to the Parliament’s commissioner for standards, calling it an “egregious, brazen breach of the rules.”

In a statement, Mr. Cox denied any wrongdoing and said it should be up to his constituents to decide “whether or not they vote for someone who is a distinguished professional in his field and who still practices that profession.”

At his appearance on Wednesday, Mr. Johnson defended the ability of lawmakers to work as lawyers, doctors or firefighters, but he added, “The most important thing is those who break the rules must be investigated and should be punished.”

For the prime minister, it was the latest in a web of ethics traps that have ensnared him and his party, from lucrative no-bid contracts for companies during the pandemic to questions about whether a party donor paid to redecorate the prime minister’s Downing Street apartment (Mr. Johnson later picked up the tab himself).

With a 79-seat majority in Parliament, Mr. Johnson’s position is safe for now. But analysts said he risked alienating members of his party with a crisis largely of his own making. It grew out of his government’s misbegotten attempt last week to protect another embattled Conservative lawmaker, Owen Paterson, by pressuring Tory lawmakers to vote in favor of rewriting Parliament’s ethics rules.

When that set off a storm of outrage from the opposition and in the media, the government was forced to backtrack and Mr. Paterson resigned. The spotlight quickly swung to other Conservative lawmakers, a few of whom earn more than $1 million a year from consulting contracts and other business deals.

“The question is all about how this is enforced,” said Bronwen Maddox, director of the Institute for Government, a London research institute. “The present system works if the government does not dismantle it.”

The scandal is taking a toll on Mr. Johnson’s popularity, which has dropped to its lowest levels since his landslide victory in 2019. In a recent survey by the firm Ipsos Mori, the Labour Party outpolled the Conservative Party by a single percentage point, 36 percent to 35 percent. “Just say sorry for the mess, prime minister,” declared the normally staunchly loyal tabloid, Daily Express.

“The fact that this goes beyond Johnson, and Johnson himself is involved in it, is really problematic for him,” said Tim Bale, a professor of politics at Queen Mary University of London. “It allows the opposition to establish this pattern of behavior for both the leader and his troops.”

It is also a major distraction at a moment when Mr. Johnson could have been working foreign officials in Glasgow. Rather than staying for the conference, the prime minister left Scotland last week just two days after it began. Downing Street said he moved up his return visit by a few days and was lobbying recalcitrant leaders, including Crown Prince Mohammed bin Salman of Saudi Arabia, by phone.

After being criticized for flying to London last week by private jet, Mr. Johnson took a train to Glasgow this time. But critics said his on-again, off-again engagement was typical of his approach in the months leading up to the meeting. Mr. Johnson left most of the diplomatic heavy lifting to Alok Sharma, a former business minister whom he named as president of COP26.

“Right from the start, the prime minister has had an attention deficit,” said Tom Burke, a former government adviser and chairman of E3G, an environmental research group. “He should have gone to some of the critical countries himself.”

Indeed, when the most notable announcement came on Wednesday, it was not Mr. Johnson who delivered it. The U.S. and China said they had agreed to do more to reduce emissions this decade, the result of some 30 meetings between the two countries, according to John Kerry, Mr. Biden’s climate envoy.

Mr. Johnson is not the only leader to face distractions. Mr. Biden arrived in Glasgow with Democrats still haggling over the shape of his climate legislation. While he labored to project a message of renewed American engagement, experts said other countries understandably harbored doubts about his ability to deliver.

“U.S. influence on the world stage is diminished by uncertainty, among other global leaders, about whether President Biden can get the money to fund his increased ambition through Congress,” said John P. Holdren, a former scientific adviser to President Barack Obama.

At least Mr. Biden made it to Glasgow. Mr. Xi of China, President Vladimir V. Putin of Russia and President Jair Bolsonaro of Brazil skipped the gathering, which climate experts said reduced the odds of their countries making a breakthrough commitment, even if they sent ample delegations to Scotland.

While the political storms in London were not much of a topic in the hallways or meeting rooms in Glasgow, Mr. Burke said they would confirm the preconceptions of some of the other leaders — that Mr. Johnson is not a reliable counterpart. That could reduce their incentive to make more far-reaching climate pledges.

“My sense is that he’s seen as a lightweight, and the other leaders don’t get the joke,” Mr. Burke said. 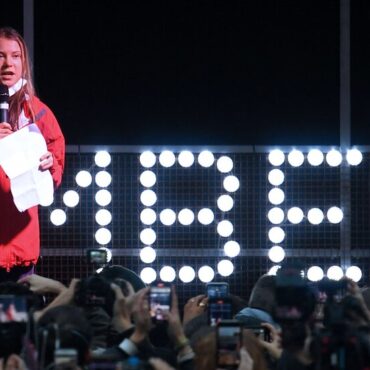 Greta Thunberg and other young climate activists called on the United Nations on Wednesday to declare a state of emergency on climate change, using the U.N.’s handling of the coronavirus pandemic as a blueprint for action.In a petition to António Guterres, the U.N. secretary general, the group argued that the organization had not marshaled its full institutional powers to confront climate change. They urged it to declare a “Level 3 […]