COP26 Protesters Back an Array of Causes, Connected by Climate Change 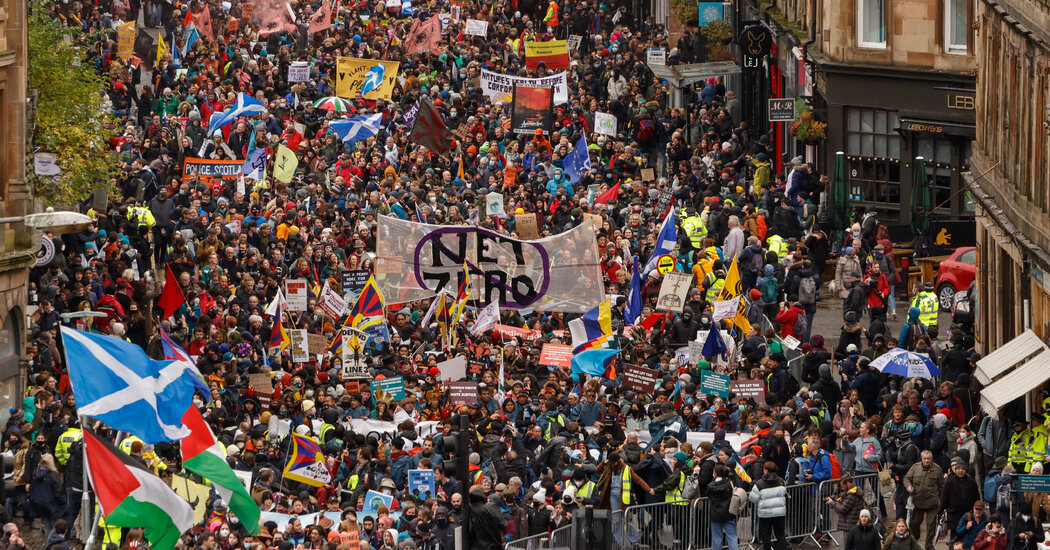 GLASGOW — Defying biting wind and steady rain, thousands took to the streets of Glasgow on Saturday in noisy and colorful protests, calling on global leaders to take action drastic enough to match the scale of a climate crisis already wreaking havoc on parts of the globe.

Waving banners, beating drums and chanting, an array of demonstrators — including members of trade unions and faith organizations, as well as left-wing activists — took over large parts of the Scottish city, which is hosting the COP26 climate summit. By midafternoon, a long, winding line of protesters was making its way through the city, taking more than an hour to pass a fixed point.

The protest illustrated how the battle to curb climate change had become an umbrella for a growing protest movement that aims to put global leaders under pressure for a broad range of causes, including racial justice and income equality.

“We should not underestimate the significance of how the climate movement has broken through into the mainstream in the last two years because it’s really starting to change people’s consciousness,” said Feyzi Ismail, a lecturer in global policy and activism at Goldsmiths, University of London.

“I think it is more important than what’s going on inside the COP meeting because it’s applying the kind of pressure that’s needed to force governments to act, but also to take far more radical positions than they might have,” she added.

Many of the protesters have made a connection to their own lives.

“Flooding is happening, and it is going to keep happening,” said Alexandra Bryden, 63, an upholsterer and curtain maker from Auchterarder, north of Edinburgh, who said that her workshop had been flooded and that she worried about the future of her family members who live by the coast.

According to some organizers, more than 200 events were planned around with the world, with more than half of that number in Britain.

In Paris, hundreds of demonstrators gathered in front of City Hall, where activists held up portraits of world leaders they accused of doing too little to curb global warming. The leaders’ names, including President Biden and President Emmanuel Macron of France, were read out and then booed by the crowd. “One, two and three degrees, that’s a crime against humanity,” the protesters chanted, before observing a minute of silence for the victims of climate change around the world.

But the focus on Saturday was in Glasgow, where authorities were closing off several dozen streets to manage the arrival of what organizers said would be tens of thousands of protesters.

“People are coming out in this weather to say we have had enough of this,” said Robert Dickie, 64, a retired accountant from Hamilton, Scotland, near Glasgow, wearing a kilt and speaking after playing the bagpipes.

“Things have got to change before we all become extinct — and that is what is going to happen in the long term,” he said.

Saturday’s march was the culmination of smaller protests that took place during the week around the city, including a youth-led demonstration on Friday organized by the group Fridays for Future, an international movement that grew out of Greta Thunberg’s solo school strike in 2018. She addressed the crowd on Friday and described COP26 as “a failure.”

The first week of the climate summit saw new pledges to tackle deforestation and to move away from coal. At least 105 countries signed an agreement to reduce emissions of methane, a potent greenhouse gas, by 30 percent this decade. Major financial institutions said they would mobilize trillions of dollars to help shift the global economy toward cleaner energy.

Still, experts say that, to avert the worst effects of climate change, temperature rise needs to be limited to 1.5 degrees Celsius, or 2.7 degrees Fahrenheit, between preindustrial times and the end of this century. And that goal is not within reach even if all countries fulfill their current pledges.

Like many environmental groups, protesters in Glasgow were skeptical of pledges, doubting that such promises would be delivered and arguing that, in any case, they did not go far enough to solve an urgent global problem.

“There are going to be communities on the Scottish coast that will be cut off. It is real,” said Ms. Bryden, the upholsterer. “I can’t look my grandson in the eye. I am sorry about what he is going to have to put up with in the future.”

Bel Burn, 59, a retired health worker from Cumbria, in northern England, said she was protesting because she opposed intensive agriculture and described how she had bought 20 acres of land, on which she planned to plant 4,200 trees.

“We are blaming China and we are blaming Brazil, but we are not doing enough, and I don’t see a strategy,” she said, sheltering from the rain.

“They haven’t gone far enough,” she added. “They have agreed a lot of this stuff before, why would we believe it’s going to be different this time?”

Stuart Graham, a Glasgow trade union official and a member of the COP26 Coalition that organized the protests, said he hoped the march would bolster campaigns for free public transportation and for a huge program to insulate and improve the city’s housing stock. “It’s critical that we have a civil society with a powerful voice to hold these leaders to account,” he said.

Organizers argue that the bewildering range of groups with different agendas are united by a common commitment to what they call climate justice.

Katia Penha, one of the activists, who is also part of the Quilombola community, a group of Black rural residents in Brazil, said it was important to be in Glasgow this weekend to call attention to the concerns of those in the developing world who are often overlooked by global leaders. Her community has been affected by mining and wants its challenges to be acknowledged alongside Indigenous communities that are disproportionately affected.

“We came here to tell the world: Without us — the Quilombola’s people in Brazil — it’s not possible to have debate about climate change,” she said, pointing out how a burst hydroelectric dam in 2015 in Mariana, Brazil, killed Quilombola people and wiped out communities.

Elsewhere, vegan activists carried balloons of a cow and a chicken with the message, “Thank you for not eating us.” On a hillside, a group spelled out “Amazonia Forever” with strips of cloth above the image of a butterfly, calling attention to the destruction of the rainforest.

So far, the violence that marked some of the protests in the early years of the summit, especially in 1999 in Seattle, has largely been avoided.

Instead, youth groups and organizations that believe in nonviolent disruption, like Extinction Rebellion, have come to the fore.

Ms. Ismail said that the question for the protest movement was whether it could extend its influence by combining with trade unions and persuading workers to use the threat of strikes to push forward a coherent agenda. But she said it had made strides already.

“The protest movement is the only thing that is going to change the situation,” Ms. Ismail said. “If there is no pressure, there will be no change.” 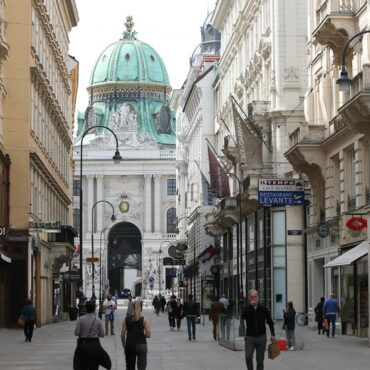 Facing a spike in infections, Austria sharpens the rules of its Covid pass.

Austria is tightening the rules of a national vaccine pass program starting Monday as it attempts to stem a coronavirus surge that has brought cases to levels unseen in almost a year.Chancellor Alexander Schallenberg announced the changes Friday night, telling reporters after a meeting with state governors: “It is simply our responsibility to protect the people of our country.”Austrians will need proof of vaccination or a past infection to be […]