Denis Villeneuve on why he cast Timothée Chalamet in ‘Dune’

“I know you,” murmurs Paul, the young protagonist of Denis Villeneuve’s “Dune.” He’s referring to a beautiful woman who has wandered in his unconscious, all windswept hair and piercing gaze, halfway between dream and perfume advert. Now she stands before him, flesh and blood; a vision no more. Yet she’s flintier than anticipated, brusquer than the fantasy. Expectation, meet reality.

Listening to Villeneuve speak, you hear a director acutely aware of expectations — of the fans of Frank Herbert’s original book, of the film studio, even his own. It’s both ironic and only fitting that to meet them, Villeneuve had to dive into his own unconscious. Speaking to CNN, he described the meditation and work in dreams he utilized to “go back to the source.”

In cinema, the possessive has followed the 1965 sci-fi novel wherever it has gone: it’s Alejandro Jodorowsky’s “Dune,” David Lynch’s “Dune,” and now it’s Denis Villeneuve’s. One source, many visions wrought in the mind’s eye. But where expectation meets reality has historically been a sore point. Jodorowsky’s film was aborted in the 1970s, Lynch’s critically panned in the 1980s. Villeneuve’s floats on the whims of a turbulent global box office, although he might have finally captured the essence of the thing.

The French Canadian has been thinking about “Dune” ever since his teenage years, and for decades he’s carried images and ideas inside. “I said to my crew at the beginning I would love it if we were able to try to create images that are not inspired by other influences,” he said. “It’s a very romantic approach,” the director conceded. “Technically impossible.”

You see, pop culture has a knack for getting in the way of itself. Sci-fi cinema has both pillaged Herbert’s novel and cluttered the road back to it; filled audiences with images and ideas cribbed from “Dune” before most people have been presented with the source material. “The most famous of them is definitely ‘Star Wars,'” the director said. Villeneuve is a “massive fan” of the early films, however, “having to go through the absurdity of having to deal with the (Star Wars) movies that have been deeply inspired by ‘Dune’ … to differentiate ourselves from that huge cultural influence, was a very interesting challenge.”

“We kept the words of Frank Herbert close to us,” he added. “That was our way to bring something fresh to the screen that would not feel like old recycled ideas.”

Timothée Chalamet and Charlotte Rampling as Paul Atreides and the Reverend Mother Mohiam, the leader of a religious sect, in “Dune.” Credit: Chiabella James/Warner Bros. Entertainment

‘This project is, as the book is, a tragedy’

“Dune” tells the story of Paul Atreides, a noble scion born with mystical powers he little understands. When his family is charged by the galactic emperor to take over a lucrative mining operation on the desert planet of Arrakis, it sparks an interplanetary war between ruling houses, with the planet’s native inhabitants, the Fremen, caught in the crossfire but far from unbowed. As the Atreides’ position is threatened, Paul becomes increasingly guided by his mother, a member of a cult of witches whose designs eclipse even the canniest political operator.

Science fiction’s ability to hold up a mirror to society is unparalleled, and “Dune” contains a whole hall of them. Between its covers there’s a cautionary tale on the mixing of politics and religion, an eco-parable, and critiques of colonialism, messianic figures and resource exploitation.

“The book suddenly became more relevant as time went by,” said Villeneuve. Was there ever one strand he was particularly interested in foregrounding? “We feel those ideas, they are in the background everywhere,” he said, “but we are focusing mainly on Paul Atreides’ journey.”

“This project is, as the book is, a tragedy,” Villeneuve argued. “It’s really the story of a young man that will have the burden of a terrible religious heritage.” For his tragic figurehead Villeneuve chose Timothée Chalamet, the only actor the director considered. “Timothée has the necessary maturity to bring this character to life, combined with beautiful youth that he brings,” said Villeneuve. “Timothée looks really young and at the same time has an old soul, and also has the charisma of a rock star — that will be necessary later on in part two.”

Yes, “Dune” is actually “Dune: Part I.” Splitting the novel was Villeneuve’s idea, and studio Warner Bros. (CNN shares parent company WarnerMedia) agreed on the condition it would see how the first film fared before shooting the second, he explained.

Looking up his resume, it was a bold move. The director was stung by “Blade Runner 2049,” his 2017 follow-up to Ridley Scott’s sci-fi original — a critical hit but not a box office success. Similarly, “Dune” is another feted sci-fi work with a history. “I will say that ‘Dune’ is by far my most accessible (film),” Villeneuve said, noting he opted for a milder PG-13 rating.

“But the commerciality of a movie, you cannot predict that,” he argued. “It’s an art form. You always try to make the best movie that you can, at the time where you are, and you cannot predict the outcome. And nobody can. If we were able to know how our movie will perform, we’d all be rich right now.”

‘Of course there was pressure not to do it’

The logistics of reassembling Villeneuve’s starry cast (alongside Chalamet, Javier Bardem, Zendaya, Rebecca Ferguson and more) could be considerable, but that won’t phase a director who strolled into the deserts of Jordan and the UAE with a team who gladly followed.

“Of course there was pressure not to do it, because it’s quite complex to bring a whole film crew into the middle of the desert and to create a safe environment for them … But for me it was crucial. It was not a negotiation,” Villeneuve said. “I’m an old-fashioned director. I’m not inspired by virtual environments, I need reality.”

Beyond the aesthetic benefits (his Arrakis really does look spectacular), out in the desert the director found his tribe. “I wanted us — the actors, the cinematographer and myself — to be inspired by the elements,” he explained. Away from civilization, out in the sands the cast could shape themselves. The through line of “Dune,” if nothing else, is adapt or die. “Nature is the god of ‘Dune,’ biology is the religion, and I wanted us to be in relationship with nature, as was Frank Herbert when he wrote the book,” he said.

Anything, it seems, to get closer to text, and aligned with the 13-year-old whose imagination set these wheels in motion. “The book was our Bible,” said Villeneuve. On set, the director had his old copy, dogeared and careworn. Still, the latter chapters will see more action before their time is done.

“If ever such a thing as part two sees the light of day, it will be a bigger movie, because of the nature of the story,” he promised. “(It) will be a more intense cinematic journey, it’s going to be a huge challenge — and an exciting one.” 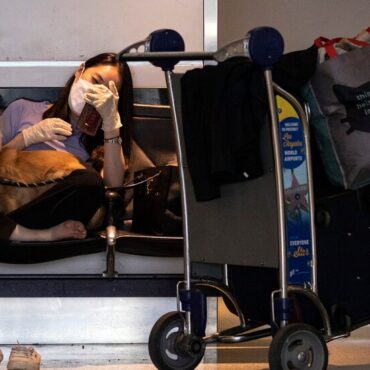 Flying With Your Pet? It Just Got a Lot More Difficult.

Animals without service dog documentation must either travel in a pet carrier that fits under the seat, or in the cargo hold.And the coronavirus has thrown another wrench into the works: Multiple airlines, struggling to survive as flights were canceled and employee ranks slashed, announced they would no longer take pets in the cargo hold at all. Today, only American Airlines, Hawaiian Airlines and Alaska Airlines accept dogs in the […]