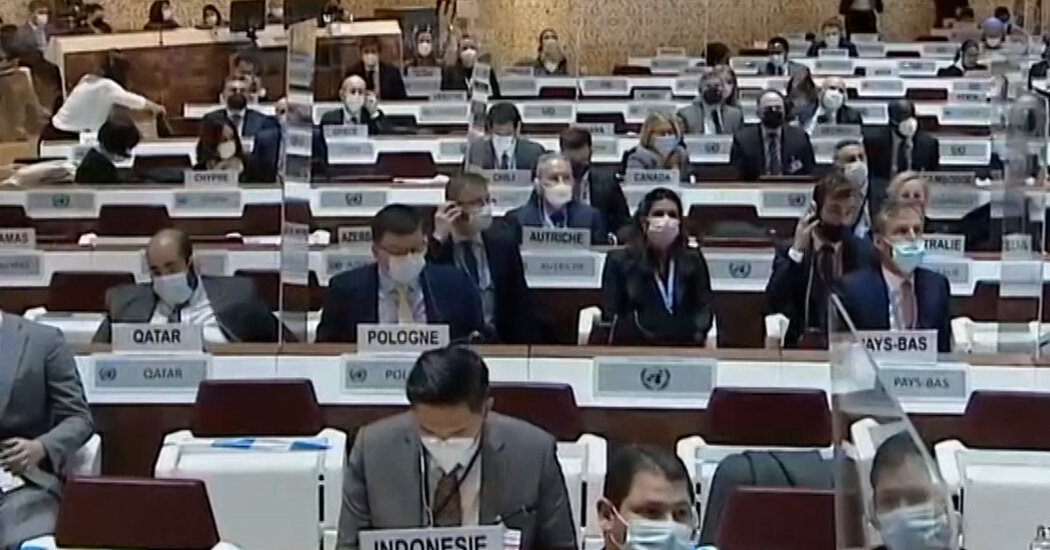 GENEVA — About 100 diplomats, many from Western countries, walked out of a speech by Russia’s foreign minister at the United Nations Human Rights Council on Tuesday in protest over his country’s invasion of Ukraine.

Ukraine’s ambassador to the United Nations in Geneva led the walkout, which left a largely empty conference hall to hear the remarks by Foreign Minister Sergey V. Lavrov at a conference on disarmament.

Mr. Lavrov, who had planned to attend the Human Rights Council session in person, delivered his speech by video link, because he said that European countries’ bans on flights from Russia had blocked his travel to Geneva.

He accused Ukraine of seeking to acquire nuclear weapons, an unsubstantiated claim that Moscow has used as one of the justifications for its invasion. Ukraine gave up its Soviet-era nuclear arsenal in 1994 in exchange for security guarantees.

Mr. Lavrov repeated the Kremlin’s assertions that Ukraine had “made territorial claims against the Russian Federation, threatened to use force and acquire a military nuclear capability.” In earlier comments to the Conference on Disarmament, he said that Ukraine still possessed Soviet-era technology that would enable it to deliver such weapons, adding: “We cannot fail to respond to this real danger.”

Speaking days after Russia raised the alert level of its nuclear forces, Mr. Lavrov said that Russia believed a “nuclear war cannot be won and should never be fought,” repeating a statement adopted by Presidents Biden and Vladimir V. Putin of Russia in their July 2021 Geneva summit.

But Mr. Lavrov added that the United States should pull its nuclear weapons out of Europe and dismantle the associated infrastructure.

The current “hysteria” in NATO and the European Union confirmed that “it was and still is the aim of the U.S. and all its allies built by Washington to create an ‘anti-Russia,’” he said.

The café closures could result in up to 2000 job losses across the 200 stores The supermarket said it will also be consulting staff about plans to close less popular hot food counters in 34 stores and changes to how it runs bakeries in 54 branches. It is understood this will affect a small number of employees and is included within the wider 2,000 figure. It is the latest in […]