Engineers to work through night on burst water main 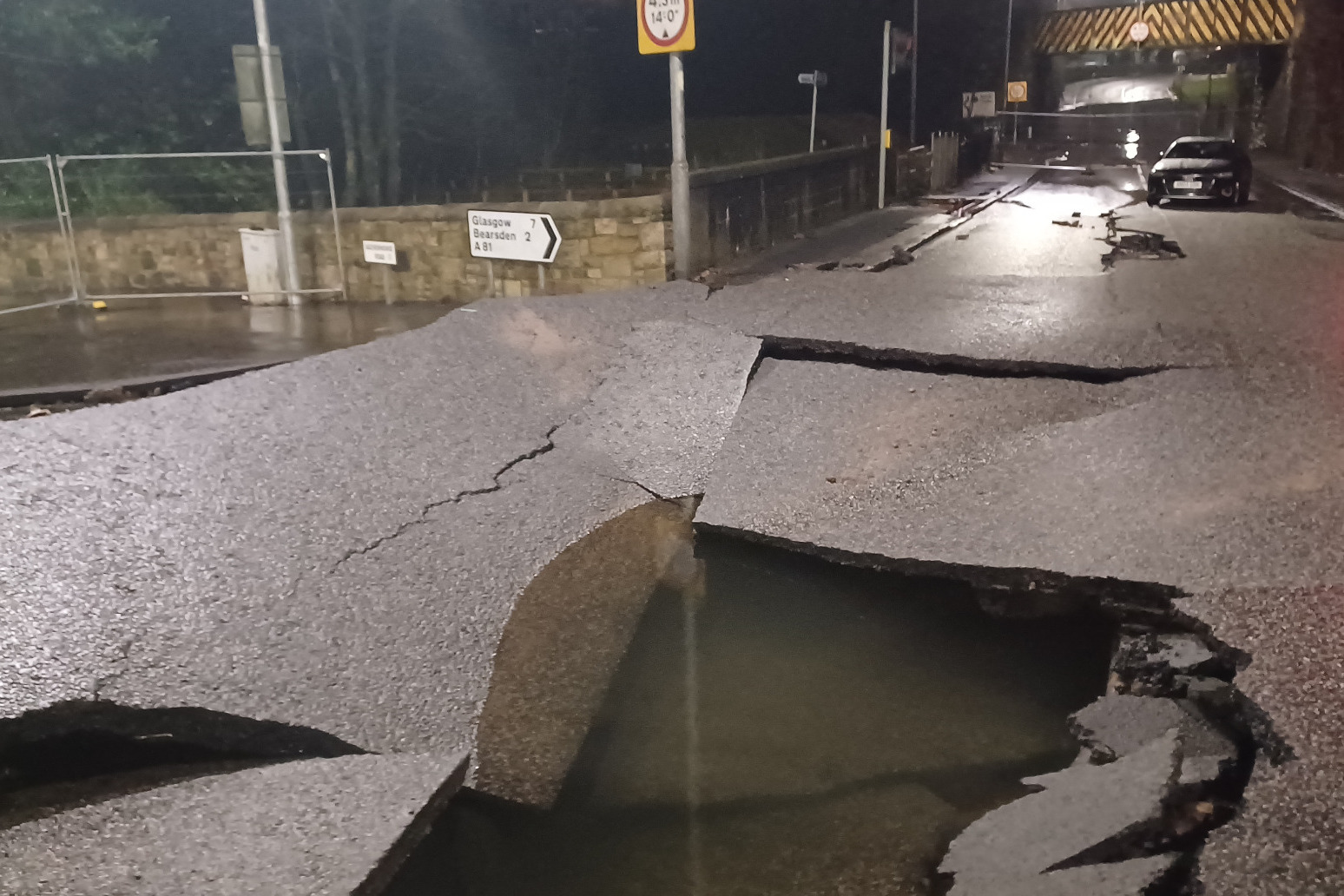 It happened in Milngavie, East Dunbartonshire, on Tuesday afternoon and led to flooding in the area – as well as interrupting supplies for around 250,000 customers in parts of Glasgow

Engineers are set to work through the night as they repair the burst water main which left hundreds of thousands of people in Scotland’s largest city without water for hours.

A 36ins water main burst in Milngavie, East Dunbartonshire, on Tuesday afternoon and led to flooding in the area – as well as interrupting supplies for around 250,000 customers in parts of Glasgow.

The force of the mains bursting split Auchenhowie Road open, and on Wednesday workers from the water firm started excavation of the 3ft wide pipe.

Water started to flow to people again on Tuesday evening, Scottish Water said, but now engineers are working to repair the road which they said is set to be closed for around two weeks.

Georgina Reid, Scottish Water corporate affairs manager for the west, said the road was a busy commuter route and the “damage has been substantial”.

“Our teams will be working through the night tonight and our priority now is to get the repair completed and the roads reopened as soon as possible,” she said.

“Drivers should expect some delays, especially at peak times and follow the diversions in place.

“Some local residents may experience some increased noise this evening and overnight and we sincerely apologise for the inconvenience and disruption this may cause.”

When the mains burst, roads in the area resembled rivers, and children at the Lullaby Lane nursery had to take shelter in the nearby Rangers Training Centre.

It interrupted supplies customers in Glasgow city centre and the Knightswood, Yoker, Scotstoun, Partick, Kelvinside, Tradeston and Ibrox areas of the city.

Diversions for drivers have been set up as engineers continue work at the site as Glasgow Road and Auchenhowie Road remain closed – and are expected to do so for around 14 days.

Scottish Water said high pressure power cables within the excavation area have now been identified, and it it was working with Scottish Power Energy Networks during the repair works.

The water company said if water was brown then this is the natural lying sediment within the mains that has been disturbed.

It advised customers to allow their cold water kitchen tap to run at reduced pressure until this runs clear.

The company said that if anyone experiences white water, this is air in the water supply following the interruption and will settle between 24 to 48 hours.

Elizabeth Warren: Crypto giants are ‘collapsing under the weight of their own fraud’

New York CNN  —  Senator Elizabeth Warren, a longtime crypto critic, warned recent turbulence in the digital asset space will only continue unless a host of regulators strengthen protections for investors. “For all their talk of innovation and financial inclusion, crypto industry giants — from FTX to Celsius to Voyager — are collapsing under the weight of their own fraud, deceit and gross mismanagement,” she said. “And when they sink, they take a lot of honest investors down with them,” […]