Europe Calls for Peace, but Not at Any Price 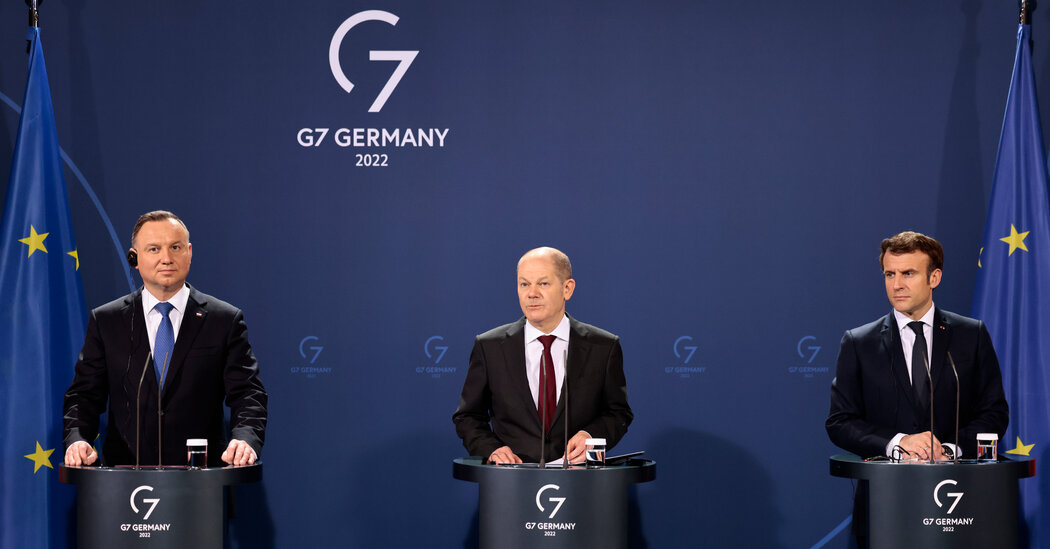 BERLIN — After two days of intense diplomacy on both sides of the Atlantic about the Ukraine crisis, the leaders of France, Germany and Poland said their overriding goal was the preservation of peace in Europe, but warned Russia of dire consequences if it launched further incursions into Ukraine.

“We share one goal,” Olaf Scholz, the German chancellor, said on Tuesday after the leaders met in Berlin. “Preserving peace in Europe with diplomacy and clear messages and the common readiness to act jointly.”

But, he made clear, peace could not come at any price. Speaking a day after meeting President Biden in Washington, Mr. Scholz continued: “A further violation of the territorial integrity and sovereignty of Ukraine is unacceptable and would lead to far-reaching consequences for Russia, politically, economically and surely strategically, too.”

It was one of the strongest statements yet on the crisis from Mr. Scholz. Germany has faced criticism for what has been perceived as a weak response to the massive Russian troop buildup at the Ukrainian border. But the meeting with Mr. Biden appeared to have stiffened the resolve of the chancellor, who took office just two months ago.

He was flanked by Emmanuel Macron, the French president, and President Andrzej Duda of Poland, who called the situation “the most difficult since 1989.” Europe, he added, “has not seen these kinds of troop movements since World War II.”

Poland’s sensitivities to Russian aggression are particularly acute after it spent the postwar decades trapped in the totalitarian Soviet imperium, and its sentiments are widely shared in Central and Eastern Europe.

Mr. Putin’s massing of troops has caused the United States to pivot to Europe, rekindled a NATO alliance focused on its original mission, and threatened the painstakingly built security of the continent.

Mr. Macron began the day in Moscow after a meeting on Monday with President Vladimir V. Putin, and he met President Volodymyr Zelensky of Ukraine in Kyiv earlier Tuesday. “We want to continue the dialogue with Russia to avoid the risk of escalation and allow for de-escalation,” he said.

Earlier, Mr. Macron said that he had secured from Russia a commitment to “no degradation or escalation” in Ukraine, opening new avenues of negotiation on the “collective security of the European space.”

But the Kremlin gave a more guarded account. Dmitri S. Peskov, the Kremlin spokesman, rejected reports that the two presidents had reached any agreement to de-escalate, and suggested that it was the United States, not France, that had standing to negotiate such a deal.

In a 45-minute conversation with reporters on the plane from Moscow to Kyiv, Mr. Macron said he had never expected “for a second” that Mr. Putin would make some grand gesture, but he felt he had succeeded in his aim to “freeze the game.”

That may seem a paltry objective, but with an estimated 130,000 Russian troops stationed just outside Ukraine, any pause would be a negotiating opportunity.

If Mr. Putin has committed not to escalate, how long that might hold is unclear. The French president suggested at least a period of weeks. But in Moscow, Mr. Peskov sounded a more menacing note.

Despite “seeds of reason” in Mr. Macron’s approach, he said, “so far, we don’t see and feel the readiness of our Western counterparts to take our concerns into account.”

The crisis, he made clear, had not been defused, even as Mr. Macron’s top diplomatic adviser judged the chances of war as “low.”

After talks with Mr. Zelensky, Mr. Macron said both sides were open to pursuing peace in eastern Ukrainian provinces seized by Moscow-backed proxies.

Mr. Zelensky, standing beside the French president in Berlin, described Mr. Putin’s opening to talks as “good if it is serious and not a game.” He appeared skeptical.

Officials representing Russia, Ukraine, France and Germany will meet in Berlin on Thursday to discuss reviving the Minsk 2 agreement, which aimed to end fighting in the separatist provinces in eastern Ukraine. “This is the only road to a viable political solution,” Mr. Macron said of the agreement, which has been plagued by disputes over its meaning and proven inoperable since it was concluded in 2015.

This issue, however, only represents a small fraction of the problem, in that Mr. Putin has NATO in his sights as much as Ukraine’s breakaway provinces. More than a border dispute, the crisis poses the question of how European security will be assured for many years to come.

Sensing power shifting in his direction from a fractured United States, Mr. Putin wants to settle what he sees as accounts long due from Russia’s humiliation by the West after the end of the Cold War. NATO, through expansion, provided security and stability to countries oppressed in the Soviet system, but at the price of angering and alienating Russia in lasting ways.

Mr. Macron described Mr. Putin as locked in a “revisionist” logic. Officials close to the French leader portrayed a Russian president hardened and rigid — as if in a “bunker,” in the words of one.

The United States and its allies have rejected as non-starters Russian demands to cease NATO expansion into parts of Eastern Europe that Moscow considers to be in its sphere of influence. Mr. Putin also wants to push NATO back out of formerly Soviet-controlled countries.

Mr. Putin has massed troops on Ukraine’s eastern border but also to the north, in Belarus, where tens of thousands have gathered, nominally for military exercises that will conclude on Feb. 20. Their presence has raised fears that the Russian president might establish military bases in Belarus, keep troops there, and even deploy nuclear weapons on the territory of its neighbor. Kyiv is just 140 miles from the Belarus border.

Mr. Macron said he had secured assurances from Mr. Putin that the troops would be withdrawn immediately after the exercise. Mr. Peskov, the Kremlin spokesman, said Mr. Putin did not give a date for the withdrawal, adding: “No one has ever said that Russian troops would stay in Belarus. That was never on the agenda.”

Analyzing Mr. Putin’s behavior before arriving in Berlin, Mr. Macron said the Russian leader “legitimizes what he does as reactive to NATO.” The result was that Mr. Putin, in his narrative, could always find a pretext for aggression. “Every time we speak of the expansion of NATO, it’s met by Russian military action that reduces the sovereignty of Georgia or Ukraine,” Mr. Macron said.

Pursuing a favored theme of a new configuration for European security with a more powerful Europe at its heart, Mr. Macron said that “we have to think about the sovereignty and independence of these countries in a different form.” The independence of a country like Ukraine must be guaranteed, along with its sovereignty and the rule of law, but also its viability. This was a time, he argued, “for reimagining a way toward stability.”

In Berlin, Mr. Duda, the Polish president, had more immediate concerns than Europe’s future strategic architecture. “We’re all asking, what happens after? What will be result?” he said. “It’s up to us to safeguard international law and territorial integrity, also for countries that are not members of the European Union or NATO, but they are our allies.”

He added: “We have to show we take no step backward. We leave nobody behind.” 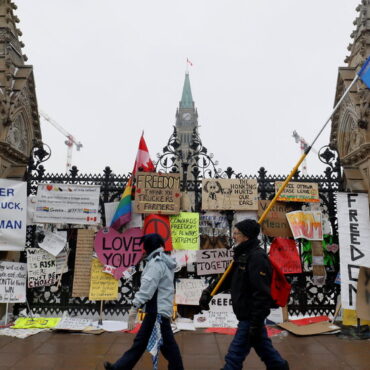 With No End in Sight, Ottawa Protests Extend Beyond Canada’s Borders

As Ottawa residents woke up Tuesday to their 12th day of protesters occupying the core of Canada’s capital, the demonstrations continued to reverberate beyond Canada, with a new road blockade temporarily cutting off the country’s busiest link to the United States and copycat convoys spreading to New Zealand and Australia.The optics of Canada’s usually placid and orderly national capital overtaken by truckers and their supporters protesting coronavirus restrictions has shaken […]