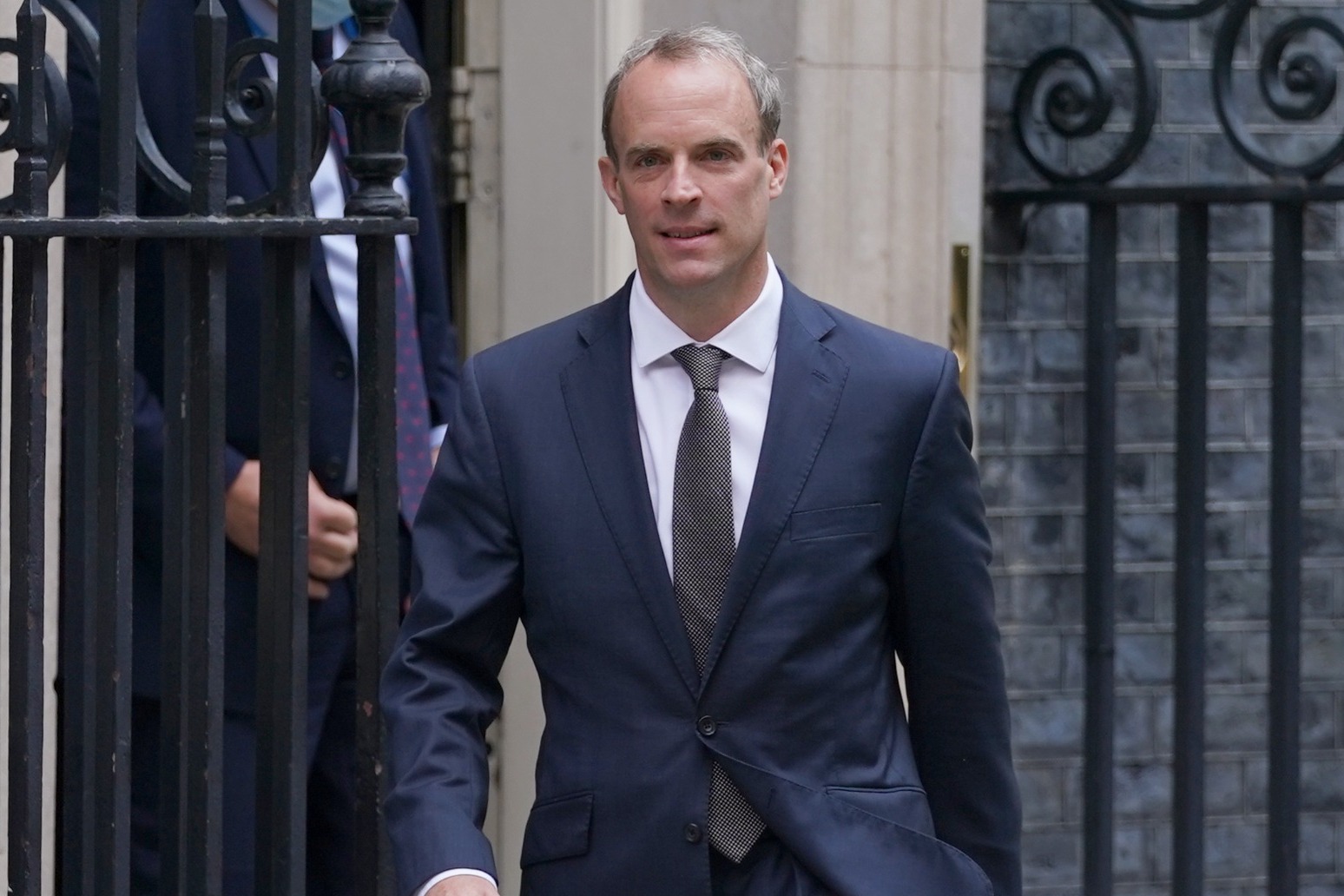 Evacuations may be able to resume from Kabul airport “in the near future”, Foreign Secretary Dominic Raab has said as he expressed a need for direct engagement with the Taliban.

The Cabinet minister raised hopes following talks in Qatar on Thursday that the Britons and Afghans left behind may be able to leave on flights from Afghanistan’s capital.

Mr Raab said the UK will not recognise the Taliban in the “foreseeable future” but said there is an “important scope for engagement and dialogue”.

He was using a visit to the region to build a coalition with nearby nations to “exert the maximum moderating influence” on the Taliban as they “adjust to the new reality” of the group being in power.

The Foreign Secretary said he had “good conversations” with Qatari Emir Sheikh Tamim bin Hamad Al Thani about the “workability” of evacuations resuming from the airport for UK nationals and Afghans who worked with Britain.

“I don’t think we’re yet able to say anything formal but that’s looking like it may happen at some point in the near future,” he told broadcasters.

The RAF’s last civilian airlift left Hamid Karzai International Airport on Saturday ahead of British troops leaving in anticipation of the US’ end-of-August deadline for a full withdrawal.

Thousands of Afghans who helped British efforts in the nation and their relatives, as well as other vulnerable civilians, are feared to have been left behind.

Reopening the airport would allow for a greater scale of evacuations, with those trying to flee the Taliban currently being told to cross into neighbouring countries.

Qatar is seen as key to progress as the Gulf state has maintained close relations with the Taliban and is a close UK ally.

At a press conference in Doha alongside Qatari foreign minister Sheikh Mohammed bin Abdulrahman Al Thani, Mr Raab said “direct engagement” is required with the Taliban, which seized power last month as the US withdrew its troops.

“The reality is we will not be recognising the Taliban any time in the foreseeable future but I think there is an important scope for engagement and dialogue,” he said.

His Qatari counterpart said he is “hopeful” that Kabul airport will reopen soon.

“There is no clear indication when it is going to be fully operational yet but we are working very hard and also engaging with the Taliban to identify what are the gaps and the risks for having the airport back up and running,” the sheikh said.

Mr Raab is also expected to visit Pakistan, which crucially shares a land border with Afghanistan.

Mr Raab remained under fire over his handling of the crisis after telling MPs intelligence was to blame for the UK being caught out by the speed of the Taliban takeover last month.

Defence Secretary Ben Wallace hit back at Mr Raab’s assertion, telling the Spectator magazine “it’s not about failure of intelligence, it’s about the limits of intelligence”.

Mr Wallace also said he was arguing in July that “the game is up” and Britain should be accelerating efforts in Afghanistan as areas historically resistant to the Taliban fell.

“I remember back in July arguing that whatever we think, the game is up and we have to do what we can to accelerate whatever we’re doing,” he said in the interview.

Despite those apparent warnings, Mr Raab holidayed in Crete as Afghanistan was being recaptured by the Taliban last month.

In the broadcast interview, the Foreign Secretary insisted: “Ben and I were taking the same assessment throughout until very late.”

A day earlier, Mr Raab had told MPs the “most likely” outcome foreseen by the Joint Intelligence Committee “and the military” after the withdrawal of foreign troops was “a steady deterioration from that point and it was unlikely Kabul would fall this year”.

However, at the emergency meeting of the Foreign Affairs Committee on Wednesday he was also confronted with a “principal risk register” warning on July 22 that Afghanistan could fall to the Taliban much sooner than predicted.

“Peace talks are stalled and US Nato withdrawal is resulting in rapid Taliban advances. This could lead to: fall of cities, collapse of security forces, Taliban return to power, mass displacement and significant humanitarian need. The embassy may need to close if security deteriorates,” the document warned.

A Foreign Office spokesman said it was “wrong and misleading” to suggest the department’s document was “at odds with our detailed assessments of the situation in Afghanistan or our public position throughout the crisis”.

Mr Raab has been unable to say how many Afghans were left behind but estimated the number of UK nationals in Afghanistan to be in the “low hundreds”.

Mr Wallace had estimated that up to 1,100 Afghans who had been deemed eligible would not be evacuated before the exit of foreign forces, though that figure will fall short of the true number the UK would wish to help.

As Mr Raab visited Doha, Foreign Office minister Lord Ahmad was to travel to Tajikistan as part of the diplomatic efforts to secure safe passages.

(CNN) — Gophers goofing around, a laughing snake and racoons seemingly sharing their secrets are among the shortlisted images for the 2021 Comedy Wildlife Photo Awards.The selection of 42 images make up the final shortlist for the competition, which received more than 7,000 entries from around the world, according to a press release on Wednesday.Other shortlisted images include a gray seal pup that appears to be giggling, a boxfish that […]