(CNN) — It’s a fact every school child knows: Mount Everest is the tallest mountain in the world.

It’s a truth that feels ancient and inevitable, an unassailable certainty that draws hundreds of climbers to attempt the summit each year — because, in the words of George Mallory, one of the first mountaineers to conquer it, “it’s there.”

However, this fascination with the mountain whose historic Tibetan name is Qomolangma (“Holy Mother”) is a modern phenomenon and the first reconnaissance mission to its slopes was completed just a century ago, on October 25, 1921.

This is the story of how Mount Everest became the ultimate adventure challenge of our age.

In the 19th century, the British Empire was a global industrial superpower, with a drive towards exploration and mastery. Places, people and even time itself — a standardized time system was first introduced on British railways in 1847 — were all to be categorized and measured.

The Great Trigonometrical Survey was a 70-year project by the East India Company that applied this scientific precision to the Indian subcontinent, establishing the demarcation of British territories in India and the height of the Himalayan peaks.

There had been a number of former claimants to the title of “world’s highest mountain”: Chimborazo in the Andes. Nanda Devi and Kanchenjunga in the Himalayas.

“People had been waiting for years to measure some of these peaks, because it seemed then that nobody had any way of getting to them, much less climbing them,” explains Craig Storti, author of “The Hunt for Mount Everest,” published this month.

Peak XV stood on the border of Nepal and Tibet (now an autonomous region of China) and both were closed to foreigners.

The mountain’s height was calculated through a series of triangulation measurements where were conducted some 170 kilometers away in Darjeeling, India.

Andrew Waugh, British Surveyor General of India, successfully argued that as the two countries were inaccessible, a local name could therefore not be found and that Peak XV should be named after his predecessor in the role, George Everest.

Everest, who initially objected to the honor bestowed upon him, had no direct involvement in the mountain’s discovery, nor did he ever get the opportunity to see it. (Incidentally, we’ve been saying it wrong: his family name was pronounced “Eev-rest”).

Everest’s human history is thought to have begun around 925 with the building of Rongkuk Monastery on the mountain’s north side, writes Storti. But the first known attempt to ascend it was the British reconnaissance expedition that set out in 1921.

The Lhasa Convention of 1904, following the British invasion led by Francis Younghusband, was the trade deal that formed the wedge to the British being able to enter Tibet.

The 1921 expedition was led by the Anglo-Irish explorer Charles Howard-Bury and included George Mallory, who would die on an Everest expedition in 1924, with his remains not recovered until 75 years later.

The golden age of mountaineering

In Europe, mountain-climbing took off as a sport — rather than a practical, political, or spiritual activity — in the 18th century. By the mid-19th century — alpinism’s “golden age” — the Alps’ high peaks were all scaled, from Mont Blanc to the Mattherhorn.

Attention turned in the late 19th century to the Americas and Africa also, but the ultimate and greatest challenge remained the Himalayas.

An Englishman named Albert F. Mummery was the Western pioneer in South Asia, perishing on Nanga Parbat in 1895.

Says Storti, “The confluence of the maturing of mountaineering, and Britain’s presence in India, led to (it almost almost being) inevitable that the people from a tiny island nation would dominate Himalayan mountaineering for many years.”

Working out the route

For the first three decades of Everest expeditions, mountaineers approached the summit from the north side, which is a significantly more difficult climb.

The first reconnaissance mission set off marching from Darjeeling on May 18, 1921 on what would be a five-month-long trip and were laying the groundwork for a century of mountaineers to follow.

Today, adventurers approach from the south, where, says Storti, most of the journey is a “fairly easy plod up the mountain, not technically difficult at all. People with very little climbing experience can put down $60,000 and have a good chance of reaching the top as long as the weather holds and the Sherpas take care of them.”

Gaby Pilson, outdoor educator and climbing instructor at Outforia, tells CNN Travel that “One major advancement was the establishment of a team of highly skilled Nepalese climbers known as the Icefall Doctors in 1997.

“The Icefall Doctors establish a route through the Khumbu Icefall, which is one of the most dangerous sections of the popular South Col Route. Without them, the number of commercial expeditions on Everest each year wouldn’t be nearly as high as it is today. However, many Nepalese Icefall doctors, guides, and porters have lost their lives in recent years while working in this dangerous section of the mountain.”

Learning how humans cope at altitude

One of the men on the 1921 expedition was Scottish chemist Alexander Kellas, whose previous pioneering work on high-altitude physiology was crucial to the future of Himalayan engineering.

At the beginning of the 20th century, very little was currently known about the effects on the body, because “nobody had been that high yet,” says Storti.

Kellas, an experienced climber, was part of the reconnaissance mission to Everest but died of heart issues just a day’s hike before reaching the mountain.

Says Storti, “He just went about his work quietly, became an expert on elevation and the effects on the human body, (and) made some of the most spectacular climbs of anyone of his generation.”

Says Pilson, “The biggest physiological challenge to climbing Mount Everest is the negative effects that climbing at high elevations has on the human body.

Prolonged exposure can cause dizziness, headache, fatigue, nausea, and shortness of breath, among other signs and symptoms. Even when a climber isn’t feeling particularly sick, most mountaineers need to stop for a few breaths after every single step while climbing on the highest slopes of Everest.”

Climbers didn’t use oxygen at all on the first expeditions, but today they “have access to improved mask designs and regulators,” says Pilson. “But, even then, climbers still have issues with oxygen masks and regulators freezing, which makes climbing at high elevations risky business.”

Pilson adds: “The other major physical challenge to climbing Everest is the sheer amount of time that it takes to summit the mountain. Most climbers spend months on the mountain setting up intermediary campsites along their route.”

Mountaineers descending from the summit of Mount Everest in June 2021.

It’s said that when the Irish playwright George Bernard Shaw saw a photo of the 1921 reconnaissance expedition, dressed in their simple clothing of wool, cotton and silk, he described them as looking like a “Connemara picnic surprised by a snowstorm.”

Says Storti, “The climbing equipment was very primitive, the clothes also. The boots were cloth and not leather. And so if storms came up — the main risk on Everest is the weather not the terrain, except from the north — they risk serious frostbite.”

Pilson says that there been a number of major technological developments in equipment between the 1920s and now, primarily in climbing clothing and equipment. “Modern advancements in fabric design and synthetic insulation have really changed the game in mountaineering. Waterproof-breathable fabrics that we take for granted today, like Gore-Tex, were truly revolutionary when they first hit the market in the late 1960s.”

As for equipment, “Mallory and his fellow climbers used hemp ropes, hobnail boots, wooden ice axes, and metal pitons to climb,” says Pilson. “These were cutting-edge pieces of equipment in the 1920s, but they can’t perform as well as the nylon ropes, crampons, and metal ice axes that we use today.”

Everest in the 21st century

Another mountaineer has died after summiting Mount Everest, bringing the death toll for the 2019 climbing season to 11 people. American Christopher John Kulish, 61, died after reaching the top of Everest on the Nepalese side of the mountain, the Director of Nepal’s Tourism Department told CNN.

While the expedition of 1921 didn’t attempt a summit, it certainly paved the way for the first successful ascent in 1953, led by Tenzing Norgay and Edmund Hillary — and for many more that followed.

“Everest is now one of the most popular big mountains to climb in the world and, with that, comes an influx of money and infrastructure in the region,” says Pilson.

“However, the popularity of Everest has its own challenges. Overcrowding on the South Col Route is a real issue, as are the large quantities of trash on the mountain.”

Too many people on Everest has, in the past, resulted in tragedy. On May 11, 1996, 12 people died after blizzards closed in on climbers some of whom had been delayed in their ascent by having to wait in line.

Climate change is also a worry. Says Pilson, “There are already concerns about how warming temperatures might destabilize the Khumbu Icefall even further, making it more dangerous to cross.”

Despite the hazards, Mount Everest’s fascination for climbers shows no sign of waning 100 years after that first expedition. Its deadly allure will no doubt inspire generations of adventurers to come. 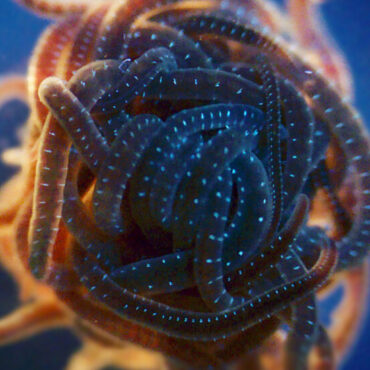 Behold, the Worm Blob and Its Computerized Twin

In the wild, a worm blob looks like any other mud ball lolling around the bottom of a pond. But if you poke an unassuming worm blob, it will respond in a way a mud ball never would, wriggling out into a noodly shape that a Pastafarian might mistake for something divine.This is how Saad Bhamla discovered his first worm blob, in a pond in California. “As you poke it […]