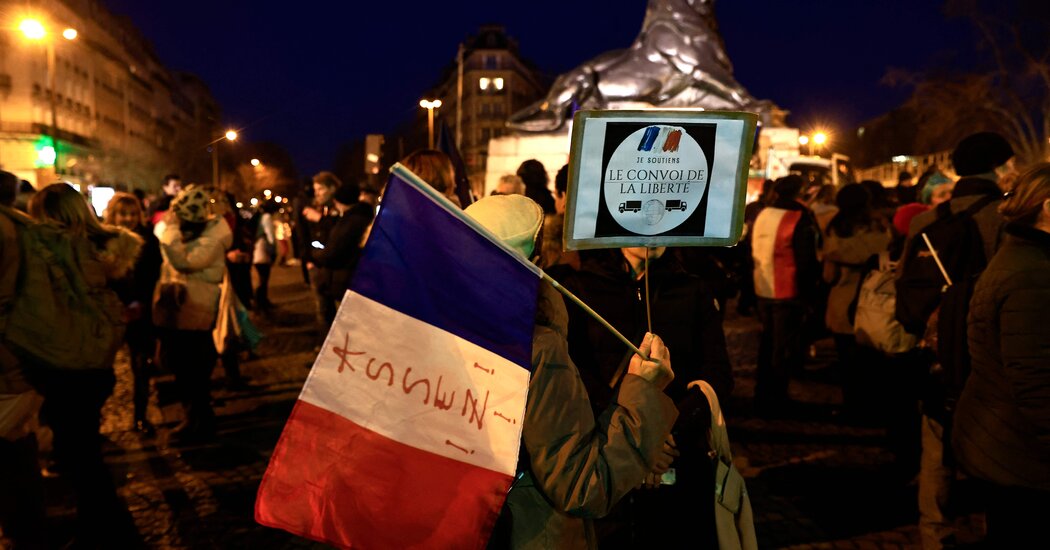 Thousands of vehicles carrying demonstrators from around France were converging on Paris on Friday in a movement inspired by Canada’s trucker-led protests, despite warnings by French authorities that they would break up attempts to block the capital.

Starting in Lille, Strasbourg, Nice and other cities, convoys of cars, trucks, camping vans and other vehicles slowly made their way to Paris, bearing protesters who honked, waved French flags and held up signs critical of the government to protest the country’s vaccine pass and other grievances like rising gas prices.

The Paris police have already issued a ban against the so-called “Convoi de la Liberté,” a direct translation of Canada’s “Freedom Convoy,” threatening to fine offenders and to tow blocking vehicles. On Friday, over 7,000 police officers were deployed to tollbooths and other key sites in and around the city with bulldozers and water cannons to break up potential blockades.

Jean Castex, France’s prime minister, said on Friday it was wrong to “associate these virulent attacks against vaccination with the word freedom,” telling the France 2 television broadcaster that the protesters were free to demonstrate but not block traffic.

“If they block Paris or if they try to block the capital, we will have to be very firm,” Mr. Castex said.

But President Emmanuel Macron also appealed for calm, saying in an interview with the newspaper Ouest-France on Friday that he understood the French were exhausted by pandemic restrictions.

“Sometimes that weariness expresses itself through anger,” Mr. Macron said. “I understand it and I respect it.” He added: “But we need unity, we need a lot of collective goodwill.”

One of the main Facebook groups behind the movement in France has attracted over 360,000 followers over the past weeks, but it was unclear how big the demonstration would be once it reached Paris — French media, citing anonymous police sources, said an estimated 2,500 to 3,000 vehicles were heading to the capital. Some protesters seemed unfazed by the authorities’ firmness.

It was unclear how many of the demonstrators intended to actually block the city. Some told French media they only wanted to join weekly protests against the vaccine pass that have been held on most weekends in Paris but that have waned significantly in recent months.

Still, the French government is keeping a close eye on those protests, which initially focused on France’s vaccine pass but have grown to encompass other sources of frustration, like rising gas or energy prices.

That motley mix of grievances and lack of any central organization, with convoys only loosely coordinated on social media and messaging platforms, have drawn comparisons to the Yellow Vest movement that rocked France in 2018 and 2019 with months of sometimes violent protests. That movement was sparked by an increase in gasoline taxes but was fueled by a much broader sense of alienation felt by those living outside Paris.

“We’re not listened to,” Sophie, a 40-year-old unvaccinated protester who set out for Paris from Valenciennes, in northern France, told Europe 1 radio.

Sophie, who did not provide her last name, said she was tired of not being able to go to the restaurant or the movie theater because of her vaccination status, and she welcomed the protests.

“To see that much energy, that much solidarity, honestly, it’s really heartwarming,” she said.

France’s vaccine pass bars most people who do not show proof of full vaccination or recent recovery from Covid from entering public establishments like bars, restaurants and museums. A negative test result is no longer sufficient for those still unvaccinated.

The government has not committed to a hard deadline to lift the vaccine pass. But it has said it could do so this spring once Covid-19 hospitalizations fall to an acceptable level, and it has dismissed the protesters as a minority whose frustration was being manipulated by Mr. Macron’s political opponents. 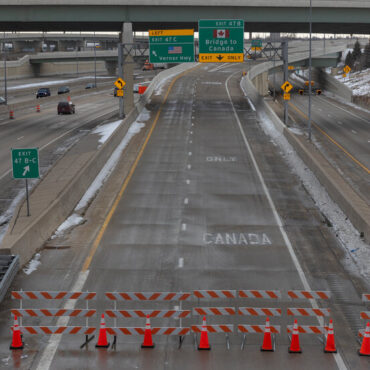 Blockades of the U.S.-Canada border continued to leave some major carmakers short of crucial parts, forcing companies to shut down plants from Ontario to Alabama on Friday.Toyota said the effective closure of the Ambassador Bridge, a busy crossing connecting Detroit and Windsor, Ontario, had led to “periodic downtime” at its engine plants in West Virginia and Alabama, as well as factories in Canada and Kentucky, and that disruptions were likely […]