Giant Puppet of Syrian Refugee Angers Some on Walk Through Greece 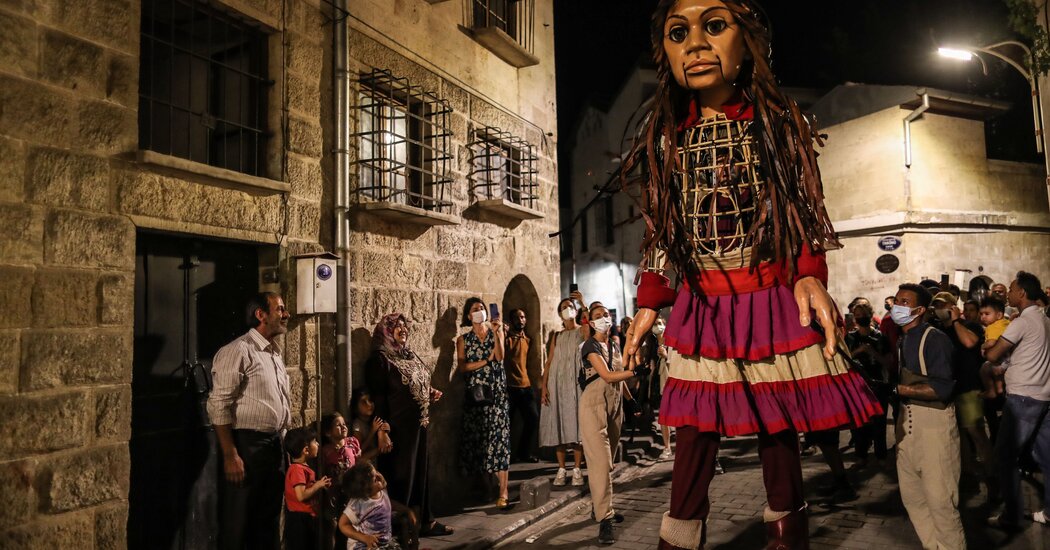 ATHENS — A giant puppet of a nine-year-old Syrian girl named Amal has been traveling across Turkey and Greece for much of the past month. It is the first leg of a 5,000-mile journey, one that is rich in symbolism as a new migration crisis looms in Europe following the Taliban takeover in Afghanistan.

The puppet is the lead character in an ambitious theater project called “The Walk” that aims to draw attention to the refugee experience by following a route similar to that taken by some Syrians who escaped the civil war in their country.

“Little Amal” and her handlers plan to cross eight countries and dozens of cities in an 8,000-kilometer bid to shine a light on the plight of millions of displaced refugees.

But Amal, who is 12 feet tall and “walks” with the aid of the team of puppeteers accompanying her, is not welcome everywhere.

On Monday, the local council of Meteora, a municipality in central Greece, voted to ban Amal from walking through a village in the area, which is home to a UNESCO World Heritage site known for its cluster of Orthodox monasteries built on towering rock formations.

The objection raised by several council members was that a puppet depicting a Muslim refugee should not be permitted to perform in a space of such importance to Greek Orthodox believers. The local bishop opposed the project for that reason, while a local heritage group complained that the initiative could bring more refugees to a country that has already taken in tens of thousands.

The tensions in this corner of Greece come as Europe wrestles once again with the inflammatory issue of migration amid the escalating crisis in Afghanistan.

Greece was particularly hard-hit by the migration crisis of 2015-2016, which saw more than 1 million refugees stream through the country — mostly from Syria, Iraq and Afghanistan.

Then, many Greeks, particularly on the Aegean Islands, pitched in to help. Over time, however, solidarity was replaced by frustration, which intensified during a standoff at the land border with Turkey in March 2020 when thousands of migrants tried to enter Greece. Since then, Greek authorities have toughened their stance, extending a metal fence at the land border and drafting legislation to accelerate deportations.

During a debate in Parliament on the bill on Friday, the migration minister, Notis Mitarachi, said that Greece “will not allow itself to become a gateway to Europe for illegal migration flows, as it was from 2015 to 2019.”

The local heritage association in Meteora said it was particularly worried that the puppet initiative could encourage a new wave of refugees to Greece.

“How much solidarity can Greece show?” Grigorios Kalyvas, the association’s head, said. “Isn’t there a limit to what we can do and how many we can take?”

In a session of the local council on Monday night, the mayor of Meteora, Theodoros Alekos, said his concern had to do with the presence of a “Muslim doll from Syria” in an area rich in Orthodox significance and popular for religious tourism. Worries that the local walk, which had been planned for Sunday, could exacerbate the spread of the coronavirus at a time of record infection levels in Greece also factored into the decision to stop it, he said.

The puppet would not be prevented from crossing the municipality’s main town of Kalambaka on its way through Greece, the council decided, but would not be allowed in villages close to the monasteries.

For the local heritage association, this was not good enough. “If they enter the town, there’ll be protests,” Mr. Kalyvas said, saying the puppet’s presence would be an “insult.” He added: “If they keep her wrapped up in the box, that’s fine.”

David Lan, one of the producers of “The Walk,” said in a telephone interview from Greece that he had not anticipated opposition to the project, but wasn’t surprised given how some people in Europe perceive refugees. “It’s a very live issue with Afghanistan,” he added.

The plan had been for Amal, whose name means “hope” in Arabic, to walk near the monasteries and have a picnic with local children, Mr. Lan said, adding that his team had secured approval from regional authorities for the event. But they now planned to go elsewhere. “If we’re not welcome, we don’t go.”

“The Walk” evolved out of the “The Jungle,” an acclaimed play about refugees that had runs on London’s West End and at St. Ann’s Warehouse in Brooklyn.

The project involves Amal and her puppeteers traveling from Gazientep, Turkey, to Manchester, England, with numerous detours along the way. Gaziantep was chosen as it is home to tens of thousands of Syrians, and Manchester because of its high concentration of asylum seekers.

Along the way, Amal joins events with local artists, children and refugee groups.

In Gazientep, excited children held up lanterns to guide Amal through the city. And on the Greek island of Chios, choirs sang to welcome her as an orchestra played.

“The meaning’s obvious,” Mr. Lan said, referring to the aim of the project. “It’s ‘Don’t forget about us.’”

Niki Kitsantonis reported from Athens, and Alex Marshall from London. 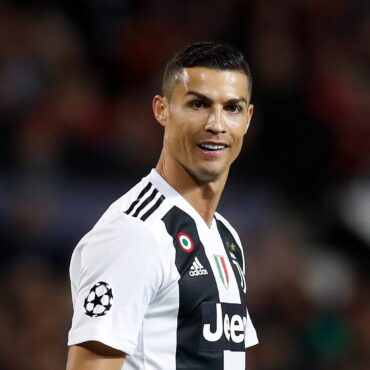 Manchester City have pulled out of the race to sign Cristiano Ronaldo, clearing the way for a potential shock return to Manchester United. The PA news agency understands United have held discussions with the five-time world player of the year’s agent, Jorge Mendes. City were offered the 36-year-old, who has made it clear he wants to leave Juventus, and were considered front-runners for his signature but have decided the deal […]