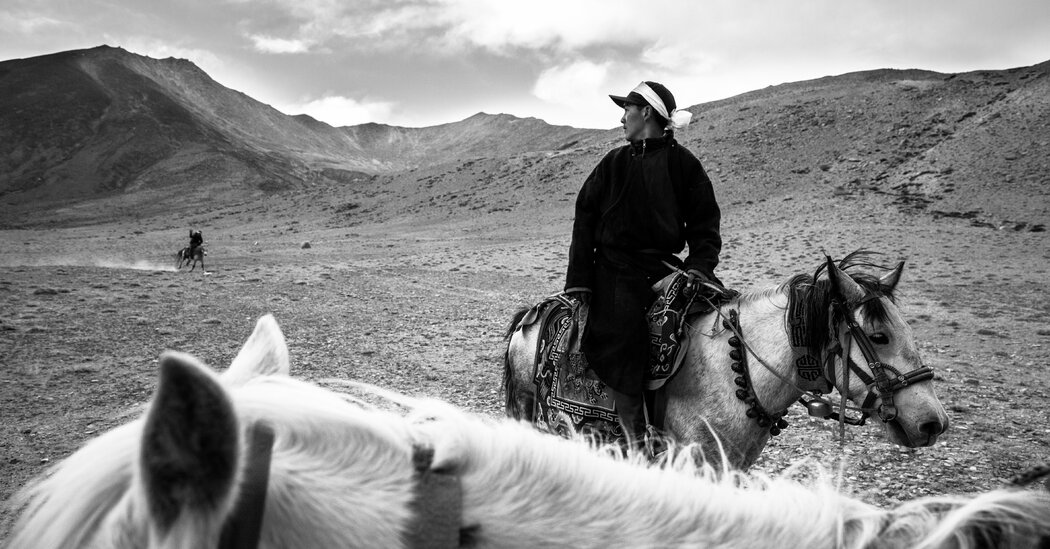 Fitting a small stone into a sling made of yak wool, Tsering Stobdan whipped his wrist and let the object fly, sending it soaring across the arid landscape. This, he told me, was how he protects his flock from predators and convinces straggling goats to return — just one of the countless skills he has learned in the last 60 years that allow him to rear his animals in such an unforgiving landscape.

Meanwhile, some 15,000 feet above sea level, I was simply trying to breathe. Here on the Changthang plateau, in a remote region of the Indian Himalayas, the altitude had left me lightheaded and gasping for air.

Tsering Stobdan is a member of a nomadic community known as the Kharnak, who for centuries have raised yaks, sheep and goats in the high plains of Ladakh, in northern India, one of the most hauntingly beautiful — if harsh and inhospitable — places on earth.

I first visited the area in​ 2016, in the middle of a long overland journey from Cambodia to Berlin. While passing through Nagaland, in northeastern India, I met a man from Himachal Pradesh, a neighboring state of Ladakh, who told me about the beauty of the Himalayas and the nomadic ways of the people who lived there. Based on his stories, I rented a motorcycle and headed to Leh, Ladakh’s capital.

In Leh I was connected with a young member of the Kharnak community who took me to meet his family on the Changthang plateau. There I explained my interest in their culture and my intentions of documenting their daily life. During my monthlong stay, they welcomed me graciously and allowed me to participate in nearly every aspect of their lives.

In 2019 I returned to Ladakh to visit with the families I’d met three years earlier. This time, I stayed for more than six weeks, moving between the community’s nomadic camps and a small town on the outskirts of Leh.

Once a flourishing tribe, the Kharnak community is now dwindling. Younger generations are being sent to nearby cities, where they can find better health care and educational opportunities. And while pashmina, the lightweight wool sheared from the bellies of Himalayan mountain goats, is a profitable product, life in the mountains is extraordinarily difficult, especially in the winter.

Today, fewer than 20 families are left to care for nearly 7,000 sheep and goats, along with several hundred yaks. And, like Tsering Stobdan, many of those who remain are growing older and are less able to cope with the daily demands of their work.

Climate change has also had a profound effect on the Kharnak’s way of life. Weather has become more difficult to predict, rain patterns in particular. Because of warming temperatures and the overuse of certain pastures, areas once thick with vegetation now lie barren. Small glaciers, which for centuries provided a reliable source of water, are receding.

As a result, Kharnak shepherds are forced to shuffle their flocks around more frequently and with less certainty.

Among these nomadic communities, families and animals live in strict interdependency. The milk from the sheep, goats and yaks — made into cheese, yogurt and butter — forms the foundation of the dairy-based diet.

Life for the Kharnak is difficult year-round. During the longer days of spring and summer, the shepherds milk and shear their animals in the early-morning hours before taking them out to graze, often walking more than 12 miles a day at altitude. Another round of milking and shearing takes place in the evening.

But the work doesn’t end there. Food must be cooked, sheds maintained, carpets woven, ropes fabricated, manure collected for fuel.

The real challenges, though, come in winter, when the temperatures drop to below -30 degrees Fahrenheit. Roadways are often blocked, and food becomes scarce. During these long months, from November to April, the livestock are enclosed in shelters and fed animal feed that’s provided by the government.

During the winter, most of the Kharnak move temporarily to a town called Kharnakling, on the outskirts of Leh, some 90 miles from their highland pastures. While away, they leave their livestock in the hands of a few family members and paid shepherds, who care for the animals during the harshest months of the year.

To afford their homes in Kharnakling, many of the nomads had to sell their animals and leave behind their traditional stone houses and tents in the mountains. And with more frequency, members of the community are remaining in Kharnakling year-round, having given up on their old way of life.

At their home in Kharnakling, I talked with a Kharnak elder and one of his grandsons. Dawa Tundup, who was 83 when I met him, had left behind his nomadic life to settle near the city, where he could live more comfortably and with better access to health care. He reminisced about his days in the highlands and dreamed of returning, he said, but acknowledged that life there had become untenable for most younger people, given the lack of proper schools.

Karma Tsiring, his grandson, had studied in Chandighar, a city some 250 miles south. While he acknowledged that his life is in many respects easier than that of his grandfather, he also spoke about new forms of pressure that, in the past, his family members never had to deal with.

Everything in the city is about money, he lamented, adding that many urban values, centered on consumerism, were very different from the value system taught by his ancestors at home.

Later, while attending a series of traditional festivals held in the mountains, I watched as young men performed ancestral herding skills, including flinging stones on horseback. Here, the interest among younger generations in the culture of their elders was palpable, as most of them had come all the way from the city for this one event.

There were no winners or losers during the festivities. Instead, the riders were given a shot of chhang, a local Ladakh beer, and a khata, a traditional Tibetan scarf, every time they hit their targets.

It was a heartwarming scene: tribal elders instilling hard-earned wisdom among their enthusiastic descendants.

Still, one of the greatest concerns among the Kharnak is that their vast store of nomadic wisdom — the specific types of grass that certain animals need to survive, how meat is dried and preserved, how temporary shelters can be built with meager materials, among thousands of other examples — will be lost in the coming years.

Facing a generational exodus and the threats of a changing climate, their rich culture, amassed over centuries, may vanish in what amounts to the blink of an eye.

They met on Valentine’s Day while hiking in the Himalayas

(CNN) — It was Valentine's Day 1996 when Lee Green walked into a mountain lodge in Nepal, surrounded by the snowcapped Himalayas, and encountered Mandy Halse for the first time.Green and Halse were thousands of miles from their respective homes in England and New Zealand. Both were backpackers in their twenties determined to see as much of the world as they could. They'd found themselves in Nepal by a series […]