A gold mask dating back over 3,000 years is among hundreds of relics uncovered from a series of sacrificial pits in southwest China, according to the Sichuan Provincial Cultural Heritage Administration.

The finds were made at Sanxingdui, a 4.6-square-mile archeological site outside Chengdu that has yielded thousands of ancient artifacts since a local farmer stumbled across it in the 1920s.

The golden mask, which was discovered in June but first unveiled earlier this month, weighs about 100 grams (0.22 pounds) and would have been part of a larger bronze head rather than a standalone object, according to state-run press agency, Xinhua. It is thought to hail from the late Shang dynasty, which came to an end in 1046 BC.

The artifact is one of around 500 items uncovered from the pits in recent months, according to Chinese state media. Ivory relics were also among the discoveries, as was a jade knife, a ceremonial vessel known as a “zun” and several bronze figurines.

Archaeologists made a breakthrough at Sanxingdui in the mid-1980s, when they found two ceremonial pits containing over 1,000 items, including elaborate and well-preserved bronze masks.

After a long pause in excavations, a third pit was found in late 2019, leading to the discovery of five more in 2020. In March of this year, an earlier cache of over 500 items was unveiled by authorities, including another gold mask and a bronze vessel with owl-shaped patterning.

An archaeologist at work in one of the sacrificial pits. Credit: CHINE NOUVELLE/SIPA/Shutterstock

Many of the objects appear to have been ritually burned before being buried, leading experts to believe that the pits were used for sacrificial purposes.

Sanxingdui is thought to have sat at the heart of the Shu state, a kingdom that ruled in the western Sichuan basin until it was conquered in 316 BC. Findings at the site have offered evidence of a unique Shu culture, suggesting that the kingdom developed independently of other societies in the Yellow River Valley, which is traditionally considered to be the cradle of Chinese civilization. Silk fibers and the remains of textiles have also been found in the pits.

“The new discoveries demonstrate once again that imagination and creativity of the ancient Chinese far surpassed what people today had expected,” Tang Fei, chief of the Sichuan Provincial Cultural Relics and Archaeology Research Institute, told Xinhua.

A bronze mask discovered in one of the eight sacrificial pits discovered at the Sanxingdui ruins site. Credit: CHINE NOUVELLE/SIPA/Shutterstock

Many of the items unearthed at Sanxingdui are now on display at an on-site museum, though excavation of two of the pits is still ongoing.

Though not yet recognized as a UNESCO World Heritage Site, Sanxingdui is on the organization’s “tentative list” for future consideration. It is, along with other Shu archaeological sites, described by the UN agency as “an outstanding representative of the Bronze Age Civilization of China, East Asia and even the world.” 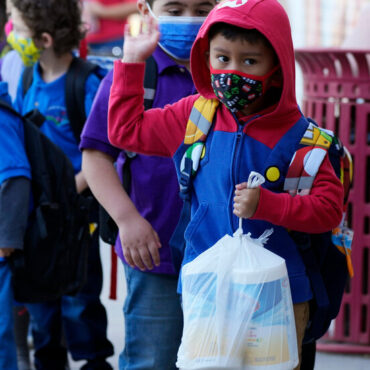 Most U.S. schools do not yet meet Biden’s demand for testing and vaccines.

For schools to stay open and safe, President Biden said last Thursday, they need to require universal masking, vaccinations for teachers and staff and regular tests for unvaccinated people. So far, the largest U.S. districts are succeeding at masking, but only a minority are implementing the others.Out of 100 large districts, including the biggest urban districts in every state, nine in 10 are requiring students to wear masks, according to […]