How a Nuclear Bomb Could Save Earth From a Stealthy Asteroid 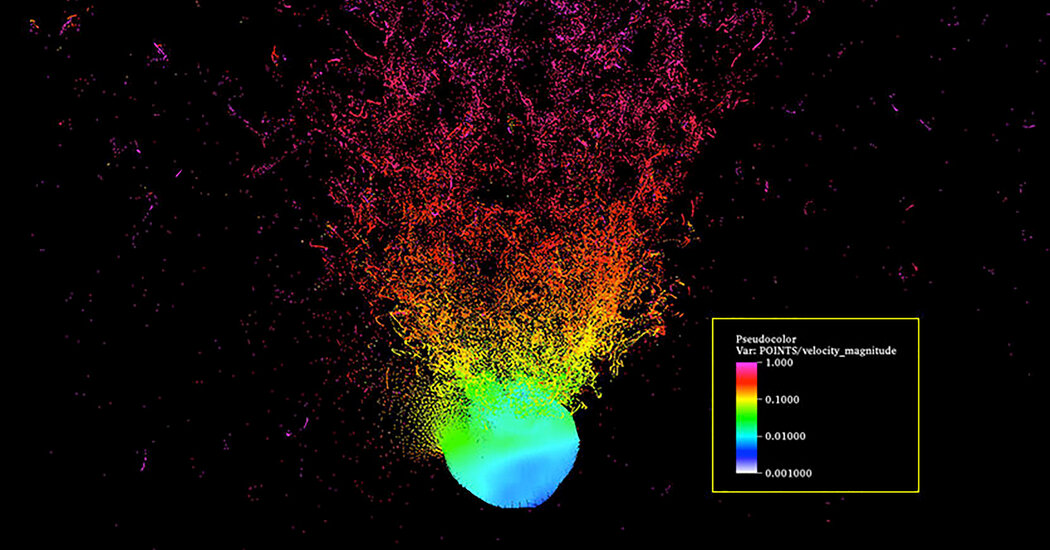 One day, astronomers may spot an asteroid months away from a cataclysmic rendezvous with Earth. Our only chance of survival at such a late stage would be to try to use a nuclear explosive to obliterate it.

But would it work?

Unlike some melodramatic Hollywood blockbusters of the 1990s, real-life scientists are largely unconcerned by any planet-sterilizing behemoths. The orbits of almost every asteroid two-thirds of a mile across or larger have been precisely mapped out. “We know they’re not going to be a threat anytime soon,” said Megan Bruck Syal, a planetary defense researcher at the Lawrence Livermore National Laboratory.

Instead, their focus is on relatively small asteroids, those about the size of football stadiums, notable for their abundance as well as their ability to evade asteroid-hunting observatories. “Those are the ones that we tend to worry more about because they could come out of nowhere,” Dr. Bruck Syal said.

Such a diminutive asteroid may not sound like much of a danger compared to the 6.2-mile colossus that slammed into Earth 66 million years ago with apocalyptic results. But a meteor that exploded over Siberia back in 1908 was only about 200 feet across — and the blast’s shock wave leveled 800 square miles of forest. “That’s the size of the whole Washington D.C. metro area,” said Dr. Bruck Syal.

Using high-fidelity simulations, scientists reported in a study published earlier this month that a stealthy asteroid as long as 330 feet could be annihilated by a one-megaton nuclear device, with 99.9 percent of its mass being blasted out of Earth’s way, if the asteroid is attacked at least two months before impact.

Ideally, asteroids targeting our blue marble would be identified decades ahead of time. If so, the hope is that an uncrewed spacecraft could slam into them with sufficient momentum to nudge them out of Earth’s way. This strategy, known as deflection, is getting its first test next year with NASA’s Double Asteroid Redirection Test (DART) space mission.

But an asteroid even several years away from Earth may not be suitable for deflection. At that stage, it may be too late to sufficiently alter its trajectory with a nudge. And if any deflection attempt proves overzealous, the asteroid may break up into smaller but still portly pieces that could hit Earth in multiple spots.

Using a nuclear blast to obliterate an interplanetary interloper “will always be the last resort,” said Patrick Michel, an asteroid expert at the Observatoire de la Côte d’Azur who was not involved in the study. But if we are short on time, it may be our only hope.

A team led by Patrick King, a physicist at the Johns Hopkins University Applied Physics Laboratory, ran 3-D simulations to see whether a nuke could provide planetary salvation. Like a wannabe Marco Inaros, a villain from the science fiction series “The Expanse” who schemed to bombard Earth from space, he hurled virtual 330-foot asteroids at our planet along five different orbital paths.

Powerful one-megaton nuclear devices were sent to greet them.

The simulations showed that when the detonation took place two months or more ahead of the projected impact date, it was sufficient to ensure that almost every asteroid fragment that survived the blast missed Earth. Any fragments that did reach Earth would probably be small enough to burn up in the atmosphere, said Dr. Bruck Syal, a study co-author.

This strategy isn’t foolproof. “If you miscalculate the energy you need to destroy it, you may make a lot of fragments,” Dr. Michel said — and some may be sizable enough to impact Earth with considerable violence.

Nobody wants to wait until the last moment to see if a nuclear Hail Mary saves the world. But one day humanity may have no choice: NASA estimates that there are 17,000 near-Earth asteroids 460 feet or larger that are yet to be found.

To reduce the odds of an asteroid ambush, scientists are being proactive. A future NASA space telescope aims to spot two-thirds of those miniature menaces. Its hopeful success will come as a relief to planetary defense officers who, perhaps more than anyone else, don’t wanna miss a thing.

Written by Elliott Gotkine, CNNArad, IsraelWith desert peaks stabbing the sky and a thin blue ribbon of Dead Sea shimmering in the distance, the ghostly figures of around 200 men and women -- painted head to toe in white -- began appearing from behind an outcrop. Each and every one of them was naked. Which could only mean one thing: World-renowned New York artist Spencer Tunick was back to photograph […]