While up-and-coming gender-fluid and non-binary designers like Harris Reed and Ella Boucht have begun to make their mark, it’s also no secret that the fashion establishment hasn’t made much of an effort to design for non-binary people — at least that’s if the collection after collection of drab, supposedly “gender-fluid” beige hoodies and graphic tees is to judge by.

And while gender non-conforming, trans and non-binary people have existed forever, social media means that they have a new visibility and means of making their voices heard (including sharing memes roasting each subpar unisex capsule collection). However, in the past year or so, TikTok has becomes the grounds for a thriving style community, where non-binary content creators swap gender-affirming fashion tips or simply — but no less importantly — freely express their style.
“Fashion is a vehicle for expression,” said Kate Sabatine, who uses the handle @k8sabz, in an email interview. “Every day I wake up and ask myself, ‘What gender do I want to express myself as?”

Sabatine has racked up over 948,000 followers on TikTok with an eclectic mix of videos that includes queer-focused fashion advice (as well as roleplaying a range of hyper-specific lesbian characters), For them, fashion has been an important aspect of having their gender and identity affirmed.

“I think that over the years, I’ve gotten quite good at this form of expression,” they said. “People tell me, ‘I could tell you’re gay by your outfit’ or will often ask me for my pronouns because they don’t want to assume based on my appearance.”

With 6 million views on the #nonbinaryfashion tag and 10.4 millions views on the #unisexfashion tag at the time of publish, there are numerous inspirational outfit-of-the-day posts, advice-based clips with titles like “outfits with both masc + femme energy,” and challenges like “show me your favourite non-binary outfit equation, I will start.”

To the average person, these videos might seem fun but far from revolutionary — like a queer interpretation of the noughties style blogger heyday — but for the non-binary community, particularly for people who have recently embraced their identity, they’re vital resources. Given that most mainstream fashion stores still divide clothing into “menswear” and “womenswear,” and don’t provide gender-neutral changing rooms, many non-binary people have to take it upon themselves to experiment with their styles in a non-judgmental environment.

Curious about what form this experimentation takes? In one video, user @robinstares mimicks the dress of the queer comedian Chris Fleming, channeling “Florida grandad vibes,” while in another, @kyronrizzo appears to levitate through an array of outfit changes. Illustrating a wardrobe hack, creator @maxwellvice transforms two old pairs of fishnets into a sheer strappy top that, as Vice narrates, makes people “think I’m wearing Mugler when I walk down the street.” For the less crafty among us, videos by the likes of @cgi.vampire offer tongue-in-cheek advice to live by: “Get down with dressing weird”.

According to Momo Amjad, senior strategic researcher at trend forecaster The Future Laboratory, a distaste toward the fashion establishment and its norms is partly why non-binary fashion has found such a home on TikTok, especially with a capitalism-sceptic Gen Z audience.

“TikTok (is) creator- and community-led, rather than brand-led, which lends it enormous credibility and authenticity,” Amjad explained in an email interview. “Brand-driven resources are often seen as self-serving and therefore not in the interest of the consumer at heart. These consumers are asking, ‘Who made these resources?,’ ‘Who benefits from them?’ and ‘What is the motivation behind them?'”

This is why Sabatine, one of the app’s biggest non-binary fashion creators, says that their fashion videos have the simple goal of encouraging followers to find their own style, without the pressure to achieve an unattainable look established by the fashion elite.

“I hope to teach people, especially my impressionable, younger audience that you don’t need to follow trends to look and feel cool and that it doesn’t have to be expensive to express yourself,” they explained.

In some of their videos, Sabatine also explores thrifting, tacitly encouraging those watching to consume mindfully. Sustainability is an inextricable key to their work — they say nearly their entire wardrobe is second-hand, thrifted or vintage. “I wanted to help people express themselves and do so sustainably,” they explained. “Some of the outfits I wear in my videos cost me less than 20 dollars from head to toe, but you would never know it.”

‘Brands need to do a whole lot more’

Like Sabatine, artist, stylist and art director Darkwah Kyei-Darkwah (@hausofdarkwah) is also active on TikTok’s #nonbinaryfashion tag. But while on Instagram, they post text slides about non-binary identity and micraggressions such as misgendering, their TikTok feed is an unadulterated celebration of non-binary finery: experimental beauty looks, clips of them sewing their own outfits, and the occasional photoshoot BTS moment.

“Where I am now with my fashion and sense of style is that it really is a complete culmination of how I feel,” they said in an audio interview. So I think it just spills out on TikTok however I’m feeling at whatever given day, at whatever given time.”

For someone already in the fashion industry like Kyei-Darkwah, there’s one main different between how non-binary people dress in real life and what major brands seem to think of them.

While the artist is not rushing out to buy gender-neutral capsule collections that make wearers look, as they put it, “like an amoeba floating through the city in an oversized t-shirt and oversized track pants,” they’re also put off by the sizing constraints of mainstream womenswear.

“Brands need to do a whole lot more. What about skirts that, rather than a zip at the side, have three buckles that you can fasten at different widths so that the body freely flows through different sizes?” they offered. “I may be a size eight in “womenswear” but my butt may not fit into a size eight the way that a size eight is made.”

For the time-being, TikTok has a solution for that, too, if you’re willing to search it out: the #sewingtiktok community, a space where individuals can gain information on making and altering their own clothes rather than squeezing themselves into outfits created by binary gender divisions.

While the #nonbinaryfashion community is yet to spark major industry overhauls, that might not be a bad thing: gender-diverse LGBTQIA+ youth are, out of necessity, retooling to start their own fashion revolution. Through positive representation, styling tips and sustainable fashion recommendations, they are forming part of a wider online community providing much-needed support to those who are trying to navigate a cissexist world.

For Amjad, this queer generation’s capacity to create spaces to thrive online is one of Gen Z’s strengths.

“Social media in general, and not just TikTok, (is) having an education and learning-focused revolution driven by young people who feel that mainstream discourse does not serve to enlighten them or liberate them,” Amjad said. 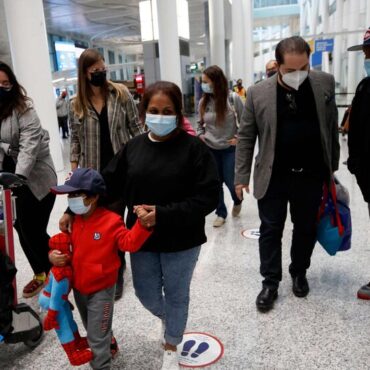 HONG KONG — A Sri Lankan family that sheltered the former National Security Agency contractor Edward J. Snowden after he fled to Hong Kong in 2013 has been given asylum in Canada, an aid group supporting the family said Tuesday.Supun Thilina Kellapatha and Nadeeka Dilrukshi Nonis landed in Toronto on Tuesday with their children, Sethumdi and Dinath. They planned to travel on to Montreal and settle there as permanent residents.“This […]