How to Map a Fly Brain in 20 Million Easy Steps 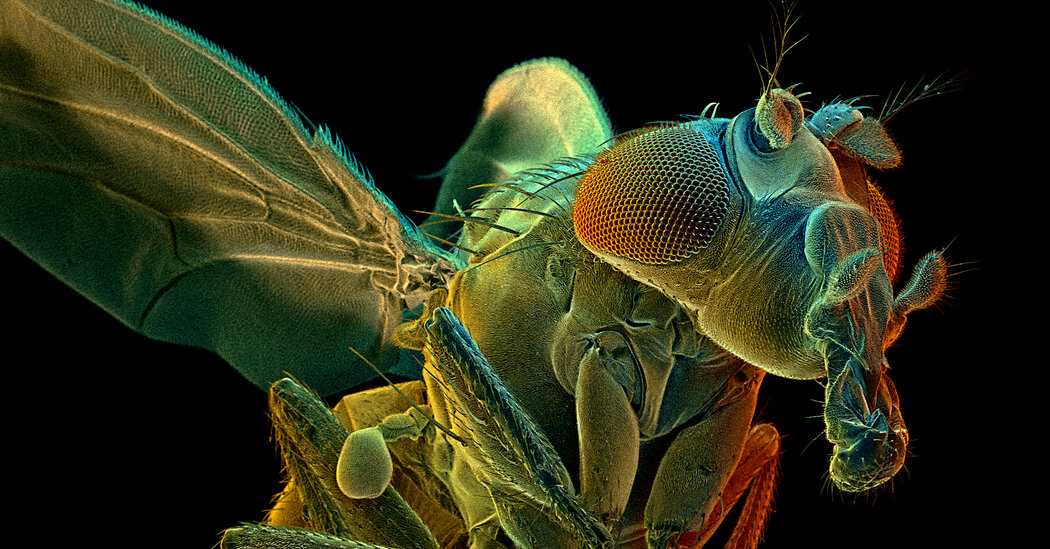 The brain of a fruit fly is the size of a poppy seed and about as easy to overlook.

“Most people, I think, don’t even think of the fly as having a brain,” said Vivek Jayaraman, a neuroscientist at the Janelia Research Campus of the Howard Hughes Medical Institute in Virginia. “But, of course, flies lead quite rich lives.”

Flies are capable of sophisticated behaviors, including navigating diverse landscapes, tussling with rivals and serenading potential mates. And their speck-size brains are tremendously complex, containing some 100,000 neurons and tens of millions of connections, or synapses, between them.

Since 2014, a team of scientists at Janelia, in collaboration with researchers at Google, have been mapping these neurons and synapses in an effort to create a comprehensive wiring diagram, also known as a connectome, of the fruit fly brain.

The work, which is continuing, is time-consuming and expensive, even with the help of state-of-the-art machine-learning algorithms. But the data they have released so far is stunning in its detail, composing an atlas of tens of thousands of gnarled neurons in many crucial areas of the fly brain.

And now, in an enormous new paper, being published on Tuesday in the journal eLife, neuroscientists are beginning to show what they can do with it.

By analyzing the connectome of just a small part of the fly brain — the central complex, which plays an important role in navigation — Dr. Jayaraman and his colleagues identified dozens of new neuron types and pinpointed neural circuits that appear to help flies make their way through the world. The work could ultimately help provide insight into how all kinds of animal brains, including our own, process a flood of sensory information and translate it into appropriate action.

It is also a proof of principle for the young field of modern connectomics, which was built on the promise that constructing detailed diagrams of the brain’s wiring would pay scientific dividends.

“It’s really extraordinary,” Dr. Clay Reid, a senior investigator at the Allen Institute for Brain Science in Seattle, said of the new paper. “I think anyone who looks at it will say connectomics is a tool that we need in neuroscience — full stop.”

‘Your fly brain is cooked’

The only complete connectome in the animal kingdom belongs to the humble roundworm, C. elegans. The pioneering biologist Sydney Brenner, who would later go on to win a Nobel Prize, started the project in the 1960s. His small team spent years on it, using colored pens to trace all 302 neurons by hand.

“Brenner realized that to understand the nervous system you had to know its structure,” said Scott Emmons, a neuroscientist and geneticist at Albert Einstein College of Medicine, who later used digital techniques to create new C. elegans connectomes. “And that’s true across biology. Structure is so important.”

Brenner and his colleagues published their landmark paper, which clocked in at 340 pages, in 1986.

But the field of modern connectomics did not take off until the 2000s, when advances in imaging and computing finally made it feasible to map the connections in larger brains. In recent years, research teams around the world have started assembling connectomes of zebrafish, songbirds, mice, humans and more.

When the Janelia Research Campus opened in 2006, Gerald Rubin, its founding director, set his sights on the fruit fly. “I don’t want to offend any of my worm colleagues, but I think flies are the simplest brain that actually does interesting, complex behavior,” Dr. Rubin said.

Several different teams at Janelia have embarked on fly connectome projects in the years since, but the work that led to the new paper began in 2014, with the brain of a single, five-day-old female fruit fly.

Researchers cut the fly brain into slabs and then used a technique known as focused-ion beam scanning electron microscopy to image them, layer by painstaking layer. The microscope essentially functioned like a very tiny, very precise nail file, filing away an exceedingly thin layer of the brain, snapping a picture of the exposed tissue and then repeating the process until nothing remained.

“You’re simultaneously imaging and cutting off little slices of the fly brain, so they don’t exist after you’re done,” Dr. Jayaraman said. “So if you screw something up, you’re done. Your goose is cooked — or your fly brain is cooked.”

The team then used computer vision software to stitch the millions of resulting images back together into a single, three-dimensional volume and sent it off to Google. There, researchers used advanced machine-learning algorithms to identify each individual neuron and trace its twisting branches.

Last year, the researchers published the connectome for what they called the “hemibrain,” a large portion of the central fly brain, which includes regions and structures that are crucial for sleep, learning and navigation.

The connectome, which is accessible free online, includes about 25,000 neurons and 20 million synapses, far more than the C. elegans connectome.

“It’s a dramatic scaling up,” said Cori Bargmann, a neuroscientist at the Rockefeller University in New York. “This is a tremendous step toward the goal of working out the connectivity of the brain.”

Once the hemibrain connectome was ready, Dr. Jayaraman, an expert on the neuroscience of fly navigation, was eager to dive into the data on the central complex.

The brain region, which contains nearly 3,000 neurons and is present in all insects, helps flies build an internal model of their spatial relationship to the world and then select and execute behaviors appropriate for their circumstances, such as searching for food when they are hungry.

“You’re telling me you can give me the wiring diagram for something like this?” Dr. Jayaraman said. “This is better industrial espionage than you could get by getting insights into the Apple iPhone.”

He and his colleagues pored over the connectome data, studying how the region’s neural circuits were put together.

For instance, Hannah Haberkern, a postdoctoral associate in Dr. Jayaraman’s lab, analyzed the neurons that send sensory information to the ellipsoid body, a doughnut-shape structure that acts as the fly’s internal compass.

The neurons dedicated to polarization of light also connect to — and are capable of strongly inhibiting — brain cells that provide information about other navigational cues.

The researchers hypothesize that fly brains may be wired to prioritize information about the global environment when they are navigating — but also that these circuits are flexible, so that when such information is inadequate, they can pay more attention to local features of the landscape. “They have all these fallback strategies,” Dr. Haberkern said.

Other members of the research team identified specific neural pathways that seem well suited to helping the fly keep track of its head and body orientation, anticipate its future orientation and traveling direction, calculate its current orientation relative to another desired location and then move in that direction.

Imagine, for instance, that a hungry fly temporarily abandons a rotting banana to see whether it can rustle up something better. But after a (literally) fruitless few minutes of exploration, it wants to return to its previous meal.

After receiving those signals, the PFL3 neurons then send out their own message to a set of turning neurons that prompt the fly to veer off in the correct direction. Dinner is served, again.

“Being able to trace that activity through that circuit — from sensory back to motor through this complex intermediate circuit — is really amazing,” said Brad Hulse, a research scientist in Dr. Jayaraman’s lab who led this part of the analysis. The connectome, he added, “showed us a lot more than we thought it was going to.”

And the group’s paper — a draft of which includes 75 figures and stretches to 360 pages — is just the beginning.

And just plain enormous. “I wouldn’t really treat it as a paper but more as a book,” Dr. Heinze said.

In fact, the paper is so large that the preprint server bioRxiv initially declined to publish it, perhaps because the administrators — understandably — thought it actually was a book, Dr. Jayaraman said. (The server ultimately did post the study, after a few extra days of processing, he noted.)

The paper’s publication in the journal eLife “required some special permissions and back-and-forth with editorial staff,” Dr. Jayaraman added.

There are limitations to what a snapshot of a single brain at a single moment in time can reveal, and connectomes do not capture everything of interest in an animal brain. (Janelia’s hemibrain connectome omits glial cells, for instance, which perform all sorts of important tasks in the brain.)

Dr. Jayaraman and his colleagues stressed that they would not have been able to infer so much from the connectome if not for decades of prior research, by many other scientists, into fruit fly behavior and basic neuron physiology and function, as well as theoretical neuroscience work.

But the wiring diagrams can help researchers investigate existing theories and generate better hypotheses, figuring out what questions to ask and which experiments to conduct.

“Now what we’re really excited about is taking those ideas that the connectome inspired and going back to the microscope, going back to our electrodes and actually recording the brain and seeing if those ideas are true,” Dr. Hulse said.

Of course, one could — and some have — asked why a fruit fly’s brain circuitry matters.

“I get asked this at the holidays a lot,” Dr. Hulse said.

Flies are not mice or chimps or humans, but their brains perform some of the same basic tasks. Understanding the basic neural circuitry in an insect could provide important clues to how other animal brains approach similar problems, said David Van Essen, a neuroscientist at Washington University in St. Louis.

But the central complex paper is decidedly not a one-off; detailed studies of regional mouse and human connectomes are currently in the pipeline, Dr. Reid said: “There’s a lot more to come.” 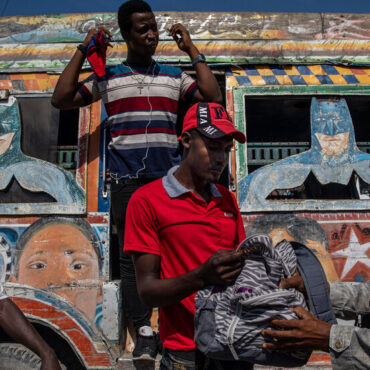 As Gangs’ Power Grows, Haiti’s Police Are Outgunned and Underpaid

PORT-AU-PRINCE, Haiti — Two officers with Haiti’s rapid-reaction force pulled up to a bridge in the capital, Port-au-Prince, to set up a checkpoint and do an afternoon’s worth of work searching for guns, drugs, wanted criminals and kidnapping victims.On each side of the bridge were neighborhoods under siege by gangs. In one of them, Haitian officials believe a powerful gang, 400 Mawozo, is holding a group of American and Canadian […]