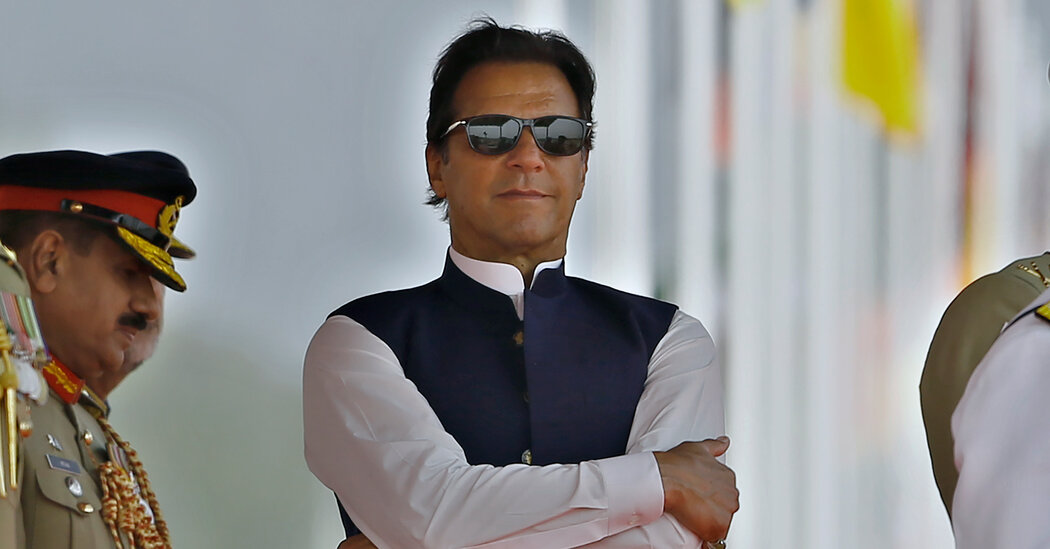 ISLAMABAD, Pakistan — Less than a day from a no-confidence vote that will almost certainly remove him from office, Prime Minister Imran Khan of Pakistan said that he would not accept the result of the vote, dismissing it as part of an American conspiracy against him and setting the stage for the country’s political crisis to drag on far beyond Sunday, as Mr. Khan fights to remain in politics.

In an interview with journalists from The New York Times and three other international media outlets, Mr. Khan claimed that the vote was part of a plot by the United States to orchestrate a “regime change” in Pakistan — doubling down on an allegation he has pushed in recent days as his political support has slipped away.

“How can I respect the result when the whole process is discredited?” Mr. Khan said, describing the proceedings as “completely marred.”

So far, Mr. Khan has not offered Parliament or the news media evidence to support his claims of a conspiracy, and American officials have denied the allegations. Under his tenure, Pakistan has drifted further from the United States and forged closer ties with Russia and China.

The no-confidence vote on Sunday is the culmination of a political crisis that has consumed Pakistan for weeks after Mr. Khan, the international cricket star turned politician, appeared to lose support from the country’s powerful military last year and a coalition of opposition parties moved to vote him out of office last month.

This week, the tide appeared to turn against Mr. Khan after several parties in his governing coalition split away — giving the opposition the simple majority needed in the 342-member National Assembly to remove him from office, and prompting calls for him to resign ahead of the vote.

On Saturday, the country’s powerful military, which has not publicly taken a side in the current political crisis, seemed to distance itself from Mr. Khan’s policy agenda. Speaking at a security conference in Islamabad, the army chief, Gen. Qamar Javed Bajwa, said that Pakistan hoped to expand and deepen its ties with other countries, including the United States — a sharp rebuke to Mr. Khan’s foreign policy agenda distancing Pakistan from the United States.

Unlike Mr. Khan, who has not strongly condemned the Russian invasion of Ukraine, General Bajwa referred to the invasion as “unfortunate” and said that “despite legitimate security concerns of Russia, its aggression against a smaller country cannot be condoned.”

Mr. Khan has rejected calls to resign. As late as Saturday, he appeared to be scrambling for any way to delay the vote and remain in office.

On Saturday night, in a Q. and A. with Pakistani citizens broadcast on local television, he seemed to contradict his earlier statement dismissing the result of the no-confidence vote — instead reassuring his supporters that he will win.

“I will defeat the opposition in the Parliament tomorrow,” Mr. Khan said.

His party, Pakistan Tehreek-e-Insaf or P.T.I., approached the Supreme Court seeking suspension of Sunday’s vote, claiming that the opposition lawmakers were “acting on the instigation of foreign hostile countries” and had “conspired, conceived and hatched” the no-confidence motion against Mr. Khan. The registrar of the high court turned down the petition as “not entertainable.”

The information minister, Fawad Chaudhry, who has also been put in charge of the law ministry, also asked courts to cancel bail for the opposition leader Shehbaz Sharif, who faces corruption charges and is expected to be elected as interim prime minister if Mr. Khan is voted out of office.

In his television appearance on Saturday night, Mr. Khan called for nationwide peaceful protests on Sunday. He also alleged that he was the target of an assassination plot and reiterated his accusation that the no-confidence vote was part of a conspiracy against him. Over the past week, he has said that his government has received a communiqué that conveyed threats to his government by the United States — long a favorite target of his political speeches.

He went into further detail about the alleged conspiracy in the interview with international news outlets on Saturday, claiming that the communiqué detailed a meeting between the former Pakistani ambassador to the United States and American officials on March 7. Mr. Khan alleged that American officials had criticized Mr. Khan’s recent visit to Russia and had told the Pakistani ambassador that the United States’ relationship with Pakistan depended on Mr. Khan being removed from office in the no-confidence vote.

Mr. Khan said the interaction amounted to “blatant interference in domestic politics by the United States.”

American officials have denied his allegations, and Pakistani security officials have said that Mr. Khan has misrepresented the internal diplomatic communication. Mr. Khan has not provided a copy of the communiqué to Parliament or to the news media.

If Mr. Khan is voted out of office on Sunday, lawmakers will choose an interim prime minister to serve until the next general election, scheduled for 2023. Lawmakers may decide to call early elections, most likely sometime before the end of this year.

On Saturday, Mr. Khan suggested that he would run in the next general election — confirming many analysts’ and observers’ suspicions that the vote would not be his last political fight.

“The best way to get out of this is to go for elections,” he said in the interview. “Let the people decide who they want to elect.”

Some analysts say that Mr. Khan may be employing anti-American rhetoric from his platform as prime minister to whip up public support and agitation on the street if he loses the vote, as expected. Still, without the support of the military or the allies in his political coalition who have defected in recent weeks, it is unclear how successful his next political bid will be.

“Imran Khan seems hell-bound to go to any extent to dodge the process,” said Khalid Mahmood Rasool, a newspaper columnist and analyst. “He has rather taken a route leading to chaos, stoking more polarization and divisive political manipulations.” 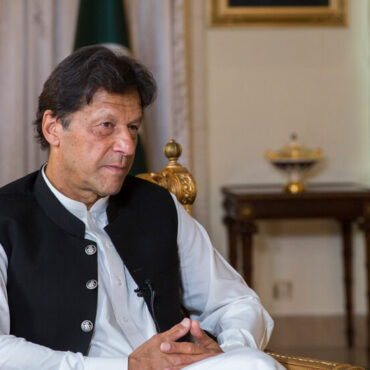 Imran Khan was elected as Pakistan’s prime minister in 2018 when he ran as a nationalist promising to fight corruption, revive the country’s struggling economy and maintain an independent foreign policy that distanced Pakistan from the United States.Born to an affluent family in Lahore and educated at Oxford University, Mr. Khan, 69, first rose to international prominence in the late 1970s on the cricket pitch and became a regular in […]