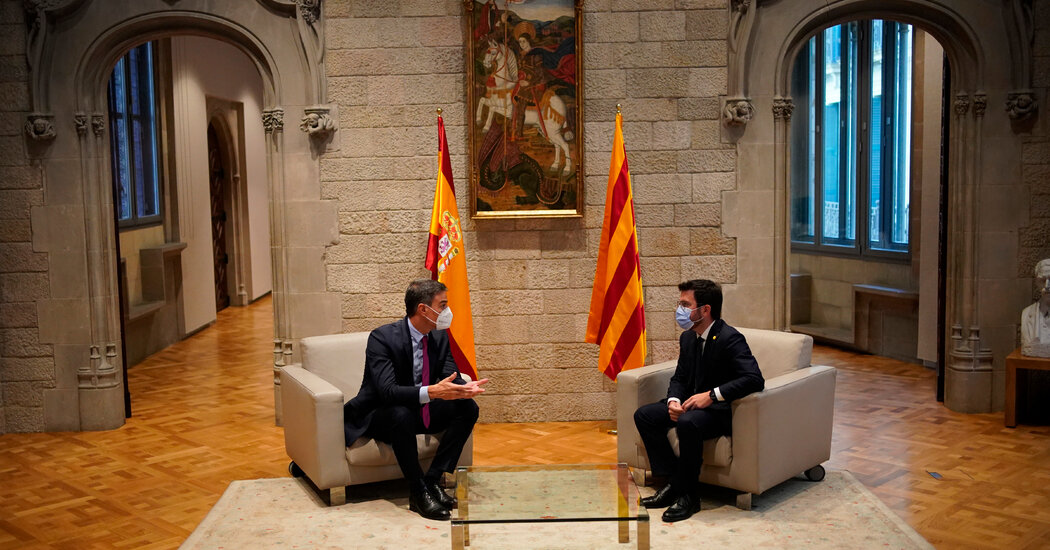 MADRID — Prime Minister Pedro Sánchez of Spain on Wednesday held a long-awaited meeting with his regional counterpart in Catalonia to seek an end to Spain’s territorial conflict, four years after a failed Catalan secession attempt and 18 months after a first round of negotiations was abruptly curtailed by the coronavirus pandemic.

The talks between Mr. Sánchez and Pere Aragonès, the regional leader of Catalonia, mark the most significant attempt yet to come to an agreement in what has been for the past decade the most divisive topic in Spanish politics: the fate of Catalonia, a region of 7.5 million people split down the middle on whether to become a republic.

Analysts warned that the negotiations would also be fraught with stumbling blocks. While Mr. Aragonès, a moderate independence politician, took office this year promising a dialogue, he has faced skepticism from Catalonia’s hard-line parties.

The ruptures were on display Wednesday when one of the parties, Together for Catalonia, did not send delegates after their first choices had been rejected by Mr. Aragonès.

“The biggest obstacle will be the divisions within the independence parties,” said José Ignacio Torreblanca, a politics professor at the National Distance Education University in Madrid.

The negotiations are taking place in the shadow of a conflict that reached a boiling point in 2017 and which still roils Spain.

That year, Catalonia’s government staged an independence referendum in defiance of Spain’s government and its courts, which declared the vote illegal. Police officers confiscated ballots and even beat people who attempted to vote. A number of the organizers were arrested and given long jail sentences for sedition.

Both sides remain embittered, but signs of a thaw appeared this year.

After a March election, Mr. Aragonès took office as the new regional leader. He still seeks independence, but pledged to de-escalate the conflict with Spain through talks. Then in June, Mr. Sánchez gave pardons to the nine independence activists who had been given sentences for sedition.

In an interview after the talks, Mr. Aragonès said his position boiled down to two main goals: a general amnesty for independence leaders he said had been accused of crimes related to their political actions; and holding a new referendum that would be negotiated with the Spanish government, a proposal Mr. Sánchez so far has rejected as unconstitutional.

Mr. Aragonès said he wanted to explore the possibility of creating legislation in Spain that would legalize such a vote. “What is important is there is a political will” to get to an agreement, he said.

The issue of an amnesty may also be a thorny one. Such a deal would include Carles Puigdemont, the former Catalan leader who fled Spain to escape charges. He did not receive a pardon this year because he remains a fugitive, Spain said.

But Mr. Aragonès said only an amnesty deal could turn the page on the conflict.

While Catalan separatists have failed for years to garner significant international support for their cause, most notably at the level of the European Union in Brussels, separatism has also dominated the political agenda elsewhere in Europe.

On Monday, Nicola Sturgeon, the leader of Scotland, called on the British government to allow Scotland to hold another independence referendum by the end of 2023, following the one in 2014 in which Scots rejected splitting off.

Much as in Scotland, there are not just divisions in Catalonia over whether independence should be pursued but also between the parties seeking independence. The issue has also shown the divide between residents of Catalonia’s capital and tourism hub, Barcelona, and smaller towns that have helped separatists keep control of the regional parliament since 2015.

Mr. Aragonès represents the left-wing Esquerra Republicana party, which leapfrogged Together for Catalonia — the more hard-line separatist party of the former Catalan leader Mr. Puigdemont — in the last regional elections in March to become the largest separatist force in Catalonia.

Those tensions surfaced again in the run-up to Wednesday’s meeting. Mr. Aragonès rejected Together for Catalonia’s nominees to the Catalan delegation, because two of them were not in the regional government, but were former prisoners who had been pardoned on the sedition charges.

The feuding between Esquerra Republicana and Together for Catalonia shows “that there is now a very significant divide between two parties that had managed at least to share the same broad vision and agenda until 2017,” said Lluís Orriols, a politics professor at Carlos III University in Madrid.

In contrast to Together for Catalonia, he said, Esquerra Republicana has abandoned the idea that independence could be achieved unilaterally.

For Mr. Sánchez, on the other hand, the return to the negotiating table presents two opportunities in the short term, Mr. Orriols said: “pacifying what has long been a hostile climate in Catalonia and at least avoiding that the conflict returns to the streets.”

Mr. Orriols said it also increases Mr. Sánchez’s options to remain prime minister should the next elections in Spain produce a result that would require him and his Socialist party to continue to govern with the support of the main nationalist parties of Catalonia.

Since the last elections in late 2019, Mr. Sánchez has led Spain’s first coalition government, alongside the smaller and more left-wing Unidas Podemos party, and with the support of Catalan and Basque parties to push legislation through Parliament.

In terms of actually resolving the Catalan dispute, however, political experts see little room for Mr. Sánchez to maneuver, as the leader of a minority government in Madrid and at a time when right-wing opposition parties, in particular the ultranationalist Vox, are pushing for more centralization in Spain, not less.

Wednesday’s meeting was the first of its kind since February 2020, when Mr. Sánchez had sought to kick-start the negotiations to resolve the Catalan conflict, but his plan was put on hold by the onset of the coronavirus pandemic that hit Spain particularly forcefully.

“There is now an intense debate over whether decentralization has worked out in Spain, and it is also clear that Sánchez cannot ignore the fact that any benefit given to Catalonia will be resented heavily in all other regions of Spain,” said Mr. Orriols.

In fact, the day before Mr. Sánchez was due to travel to Barcelona, Juanma Moreno, the regional leader of Andalusia, Spain’s largest region, called on Mr. Sánchez to open a separate bilateral negotiation with Andalusia.

“It is not reasonable that privileges are being negotiated at the expense of the other territories of Spain,” Mr. Moreno argued. 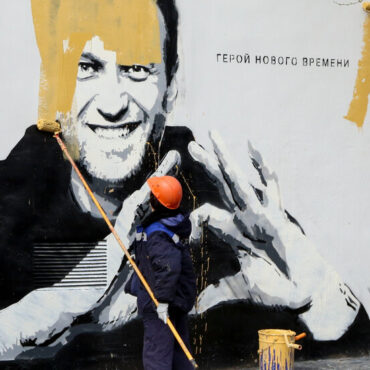 MOSCOW — In an undisclosed location outside Russia, five people have been meeting regularly for months to plot out how to deliver an improbable blow to President Vladimir V. Putin in this weekend’s Russian election.The five are allies of the imprisoned opposition leader Aleksei A. Navalny, all of them exiled because of the threat of lengthy jail sentences. Their strategy is to use the parliamentary election that runs from Friday […]