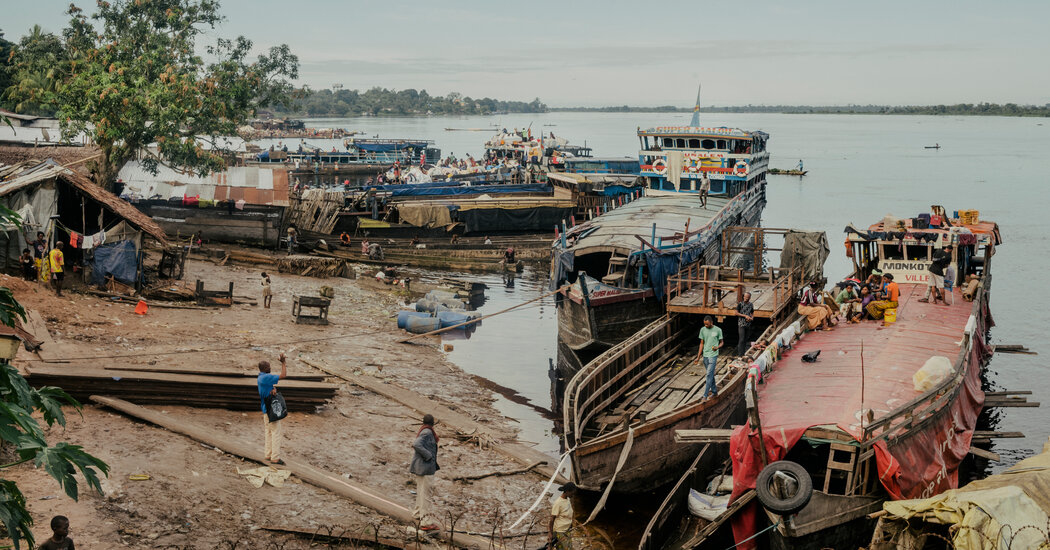 MBANDAKA, Democratic Republic of Congo — The ebullient soukous music had been blasting from speakers since before dawn, but at 8 a.m., someone aboard the brightly painted boat docked along the Congo River pressed pause, and a pastor picked up a microphone and began preaching at a volume easily heard on shore.

“You will go to heaven,” he promised his bleary-eyed flock, tired from partying all night aboard the boat, the Super Malou Express. “And also — you will get cars and houses!”

Striding along the deck of the boat, which was slowly taking on passengers for the weeklong journey to Kinshasa, the capital of the Democratic Republic of Congo, he delivered his message for about half an hour. As he spoke, the morning sun illuminated the hulls of the long, slender pirogues — hand-carved canoes — that glided past on the gleaming river below.

Onshore, Fifi Bale Mombonde lay in bed, hoping the pastor’s proselytizing wouldn’t wake her daughter, Annie, 2. Her house was right by the Super Malou Express’s dock, so she was by default a regular at its floating services. They took place almost every day the boat was in port in Mbandaka, an equatorial city surrounded by tropical forests.

“Sometimes I get up and listen,” Ms. Mombonde said. While she didn’t know the names of the pastors, she had come to recognize many of their voices and had listened to their prayers so many times she knew the words by heart. “Sometimes I just listen from bed.”

As in New York’s subway, or on buses in Nigeria and Ghana, evangelical pastors in the Democratic Republic of Congo have spilled out of their churches and are spreading the word to congregations always on the move.

Churches have long been a powerful force in Congo. The biggest, the Roman Catholic Church, wields huge power in election years, when tens of thousands of its faithful fan out across the country to observe the polls and report on any vote-rigging.

Millions of Congolese are members of the Kimbanguist church, named for its revered founder who died in a Belgian colonial prison. And the number of Pentecostal churches in the country has exploded in the past few decades.

In much of Congo, life is based around the river that gives the country its name, and so it’s on the river that many pastors go fishing for souls. They journey along the river’s vast arc, which stretches northeast from Kinshasa, the capital, and up through dense rainforest before bending south again in the country’s east.

Most waterborne pastors in Congo ply their trade aboard the river’s many baleinières, which means “whaleboats,” although they have nothing to do with whale hunting and look nothing like the ship that inspired “Moby Dick.”

The wide, diesel-chugging baleinières are how many people get from Kinshasa to towns and cities upstream, like Mbandaka, and Kisangani, the last navigable port on the Congo River.

José Sumpi, whom many call Apostle, does his preaching aboard the baleinière known as the Ibenge. On a recent day in Mbandaka, he unzipped his battered, leather-bound Bible and rested it on his jeans as some members of the boat’s crew made repairs, getting ready for the 140-mile journey upriver, to the modest fishing town of Makanza.

Off-duty crew members swung in hammocks. Near the engine, a monkey, the ship’s mascot, scampered and slipped on boards slick with diesel.

From Mr. Sumpi’s Bible spilled out photographs documenting his three decades “in the lord’s service,” as he put it — one snapshot of him blessing a child, another showing him laying hands on the sick. But all the pictures were from his landlubber life, taken when he was standing on the solid ground of his church, a branch of the Ministry of the Word, a modest Pentecostal church.

Why were there no pictures of him on the Ibenge? Perhaps because he is simply too busy preaching while aboard to stop to pose.

“I preach at night, I preach in the daytime,” he said, as the wind ruffled the leaves of the palms lining the river’s banks. “All the time, I’m preaching.”

The Ibenge’s repairs were soon done, and it was about to shove off on its two-day voyage to Makanza, or three days at most, but “that’s God’s problem,” Mr. Sumpi said.

Soon after Mr. Sumpi and the Ibenge departed, an ancient craft hung with tattered tarpaulins thunk-thunked past, a woman pouring fuel into an engine belching smoke. Then another, this one with two men just visible on the lower deck, bailing out river water with yellow plastic tubs.

Women paddled pirogues weighed down almost to the waterline with pondu, or cassava leaves, to sell at busy markets that, after miles and miles of tropical forest, would appear at the river’s edge as if from nowhere.

Many of the baleinières’ passengers are also traders, taking bales of goods upriver to sell.

Several pastors said divine messages of prosperity and smooth business transactions, as well as the usual ones about forgiveness of sins and eternal life, went down well on the baleinières.

Some of the pastors are traders themselves, with a sideline in preaching Pentecostal Christianity when they travel, in part to share the word of God, in part to make a little extra cash.

Because journeys on the baleinières can last weeks, the pastors have captive audiences and plenty of time. And congregations, even those boat-bound and not necessarily ardent believers, are expected to contribute when the collection plate comes around.

The money he can make on the river is part of what motivates Bionique Ebeke, an evangelical pastor who has grown used to the hardships of life there.

For days on end, passengers sleep packed on the hard boards of the boats, breathing in thick smoke from the engine, whose roar drowns out all conversation. If it rains, they get drenched. Food is limited.

Mr. Ebeke spends half his time preaching in a church on land in Bomongo, a town north of Mbandaka, but he also makes about 30 journeys every year aboard a baleinière, offering services each morning and night on the three- or four-day journey between the two spots.

“I work everywhere,” said Mr. Ebeke, 34. “There are lost souls on the baleinières who haven’t even heard the word of God.”

Last January at least nine people died when an overloaded vessel capsized. In February, at least 16 died when another ship overturned 60 miles from Kinshasa.

“There are many dangers, everywhere,” Mr. Ebeke said. “You can lose your life, just like that.”

Because of the risks, travelers tend to be religious, he said, and join in his prayers. But the worshipers on the river are not exactly model parishioners, he added.

“It’s not like a church where people listen to you and call you ‘Spiritual Father,’” he said. “People drink and bother other passengers. And other people say: ‘Leave us alone, stop with all your stories, man. We don’t want your God.’”

When they do, Mr. Ebeke said, he merely looks at them, says, “God is just” in his imperturbable voice and moves on down the deck. 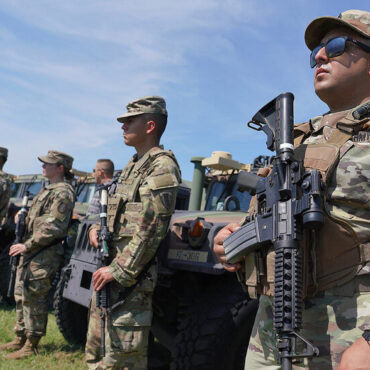 Lloyd J. Austin III, the defense secretary, has written a letter to seven Republican governors, rejecting their requests for exemptions from coronavirus vaccination mandates for their states’ National Guard troops.The rejection — sent to the governors of Alaska, Oklahoma, Texas, Idaho, Mississippi, Nebraska and Wyoming, who have all sought to allow their guard troops to refuse the vaccine without consequences — sets the stage for a potential legal battle.“In making […]