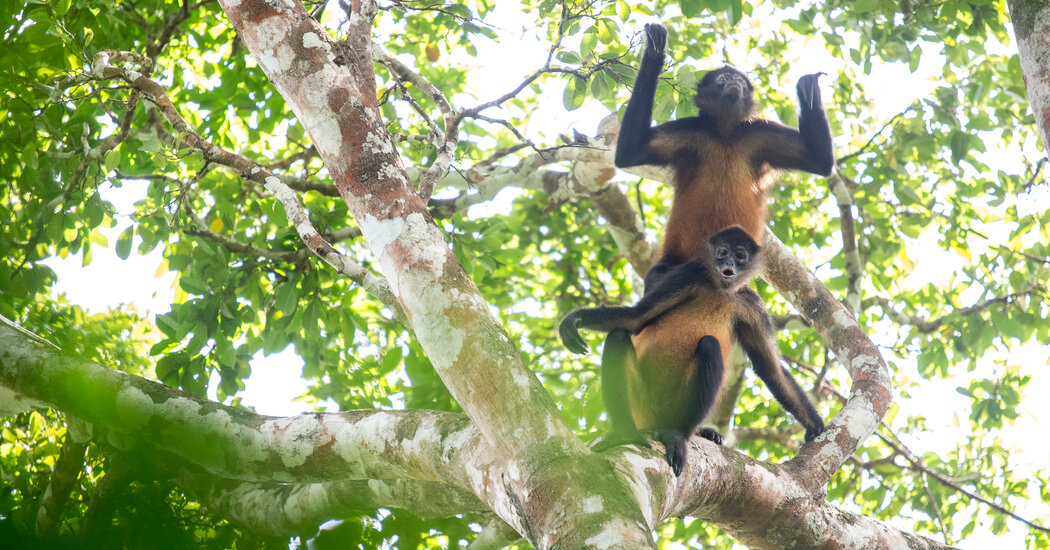 For a brief moment, as hundreds of blue morpho butterflies floated gracefully around us, the green hues of the tropical forest were transformed into a neon blue.

But the dreamlike scene, reminiscent of something out of James Cameron’s “Avatar,” was interrupted by a series of loud chirps from the canopy above. Straining my eyes to see up into the treetops, I caught a glimpse of the culprits: a pair of orange-tinted Azuero spider monkeys searching for fruit.

This incredibly rare subspecies was the reason we were here. After six grueling days spent fruitlessly trekking through Panama’s tropical dry forest, we had finally found them.

The sighting was momentary. The sound of cows from a nearby pasture startled the nimble primates, and they retreated deeper into the safety of their forest home.

Southern Panama’s Azuero Peninsula, a square block of land that juts out some 50 miles into the Pacific Ocean, is home to the country’s only remaining tropical dry forest, an ecosystem that experiences a more significant dry season than wet season, and where moisture evaporation often exceeds precipitation throughout the year.

In Azuero, the dry forest has been fragmented by deforestation from cattle ranching and the clearcutting of coastal trees to make room for luxury homes, leaving isolated pockets of forest scattered across an otherwise treeless landscape. These habitat-islands offer marooned havens for hundreds of animal and bird species that are found nowhere else in the country, including the critically endangered Azuero spider monkey.

During a population survey in 2013, the primatologist Dr. Pedro Mendez-Carvajal of Oxford Brookes University estimated that only 145 Azuero spider monkeys remained in the wild, making them one of the rarest subspecies of primates in Central and South America. In addition to suffering from habitat loss, the animals, which are seen as pests, are also hunted and poisoned by local farmers.

In the fall of 2017, I traveled to the Azuero Peninsula to work alongside Pro Eco Azuero, a conservation organization that aims to protect the area’s biodiversity and help local people make informed and sustainable decisions about their environment.

Founded by Ruth Metzel and currently led by Sandra Vasquez de Zambrano, P.E.A. has developed a community-oriented approach to conservation that includes working alongside farmers to replant trees, working with local teachers to create lesson plans around conservation and sustainability, and partnering with local supporters to foster a culture of conservation and land stewardship.

Based out of the surfing village of Pedasi, I spent a month embedded with the P.E.A., splitting my time between the forest and the sea. In the interior, I joined a team of local volunteers and biology students from the University of Panama during an informal survey to document the health of known spider monkey families. I also captured photographs that could be used in community education programs.

Guided by tips from local farmers and students, we spent our days trekking through dense undergrowth and up waterfalls in search of the elusive primates. At night, we visited rural schools to give slide shows about what we had found, sharing pictures of wildlife that many children had never seen, despite having lived with the animals in their own backyards.

At the beach I followed the efforts of P.E.A. and Tortugas Pedasi, a partner organization, to document the stunning Pacific coastline. At the time, the conservation groups were trying to gain national protection for the coastal Pablo Arturo Barrios Wildlife Refuge, while teaching students about the benefits of marine conservation.

Just as I had witnessed in the forest, members of the local communities worked alongside these organizations in an impressive exhibit of eco-minded camaraderie.

The creation of a wildlife corridor — spanning 75 miles and 62,000 acres — across the Azuero Peninsula was one of the first projects initiated by P.E.A. when it was founded 12 years ago. By planting trees across clear-cut landscapes, the corridor will increase the size of available habitat by reconnecting several islands of forest that are currently isolated from one another. Once the corridor is completed, P.E.A. hopes that the increase in forest habitat will allow for animal populations — including the elusive spider monkeys — to expand.

It took several years before the idea gained momentum, since rural farmers were skeptical about the benefits of sacrificing valuable grazing land to regrow forests.

Travel Trends That Will Define 2022

Looking ahead. As governments across the world loosen coronavirus restrictions, the travel industry hopes this will be the year that travel comes roaring back. Here is what to expect:

Rental cars. Travelers can expect higher prices, and older cars with high mileage, since companies still haven’t been able to expand their fleets. Seeking an alternative? Car-sharing platforms might be a more affordable option.

Cruises. Despite a bumpy start to the year, thanks to Omicron’s surge, demand for cruises remains high. Luxury expedition voyages are particularly appealing right now, because they typically sail on smaller ships and steer away from crowded destinations.

Destinations. Cities are officially back: Travelers are eager to dive into the sights, bites and sounds of a metropolis like Parisor New York. For a more relaxing time, some resorts in the U.S. are pioneering an almost all-inclusive model that takes the guesswork out of planning a vacation.

Experiences. Travel options centered around sexual wellness (think couples retreats and beachfront sessions with intimacy coaches) are growing popular. Trips with an educational bent, meanwhile, are increasingly sought after by families with children.

“When we first started, we thought that it was going to be as easy as knocking on people’s doors, planting trees and making a difference,” recounted Ms. Vasquez de Zambrano, P.E.A.’s executive director. “Of course that didn’t work, so we needed to investigate a way to get into these communities.”

After discovering that teachers were the key to earning the villagers’ trust, P.E.A. initiated a series of educational programs centered around conservation, sustainability and coexistence. In time they were teaching over 700 students each year. As P.E.A. fosters a new generation of young environmental activists, parents began to hear and digest the importance of conservation through conversations with their family rather than with strangers.

“It is more meaningful when it is our own children who say we must reforest and protect nature,” Ms. Vasquez de Zambrano said. “I think working with kids has made a real difference.”

Today, over 400 farmers have pledged land for the wildlife corridor project. Five hundred acres of new trees will be planted on donated land in 2022 alone. And through the collective help of local organizations, students and community activists, the coastal Pablo Barrios Refuge gained national protection in 2019.

The Azuero continues to face serious threats, including the re-institution of large-scale mining across the region and the introduction of new legislation that could allow development on protected lands. Still, Ms. Vasquez remains optimistic about the power of teaching and fostering new environmental reformers.

“Our greatest impact is the way we have changed people’s minds,” she told me. “We are creating a culture of conservation — and getting people to become advocates for their own community.”

Matt Stirn is an archaeologist and photojournalist based in Boston and Jackson Hole, Wyo. You can follow his work on Instagram.

(CNN) — The world's largest aircraft, the Antonov AN-225, has been destroyed during the Russian invasion of Ukraine, according to Ukrainian officials, generating alarm and sadness among the aviation world in which it occupies almost cult status.The enormous aircraft, named "Mriya," or "dream" in Ukrainian, was parked at an airfield near Kyiv when it was attacked by "Russian occupants," Ukrainian authorities said, adding that they would rebuild the plane."Russia may […]