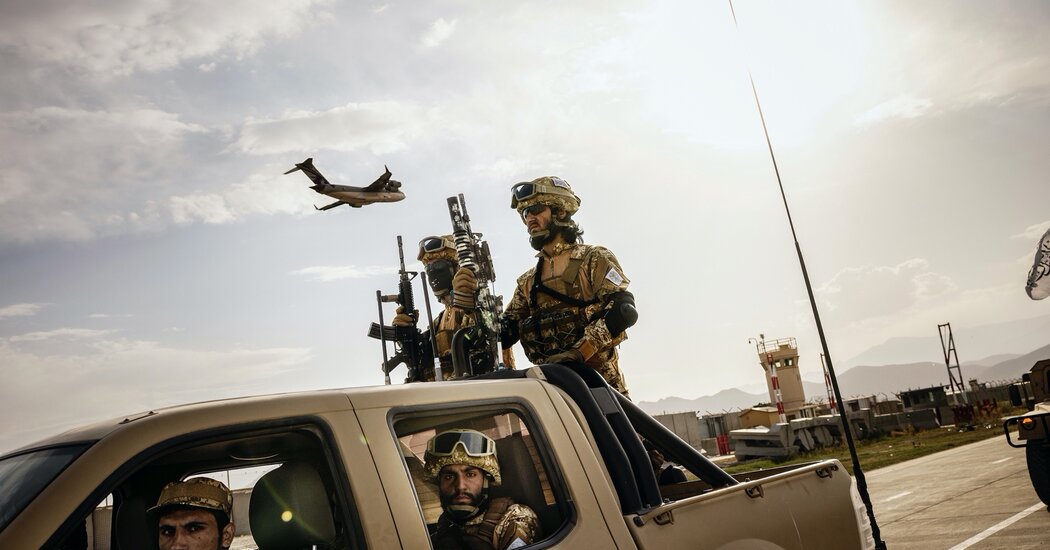 On July 15, I went to the palace to see Mohib. Above the gate tower, a giant tricolor of the republic fluttered against a clear blue sky. After passing through security, I walked across the long, deserted lawn toward the building that held the Office of the National Security Council. I waited in the council’s empty reception room until one of Mohib’s staff members, a young woman who had studied in America, brought me upstairs to his office, where he sat behind his desk. Our conversation was mostly off the record. He seemed exhausted as we spoke about the desperate fighting in Kandahar City, which had been surrounded by the Taliban.

Only a few days before, there had been a farewell ceremony for Gen. Austin S. Miller, the long-serving U.S. commander. The military had completed 90 percent of its withdrawal, well ahead of Biden’s deadline. This rapid pace was intended to reduce the risk of attack during the retreat, but it had a devastating impact on Afghan security forces. The U.S. military had spent billions to train and equip a force in its own image, heavily dependent on foreign contractors and air support. But the Afghan Army’s notoriously corrupt generals stole their men’s ammunition, food and wages; while security forces were supposed to total 300,000, the real number was likely less than a third of that. Out in the districts, the army and the police were crumbling, handing over their arms to the Taliban, who now controlled a quarter of the country.

Ghani had repeatedly insisted that he would stand and fight. “This is my home and my grave,” he thundered in a speech earlier in the spring. His vice president, Amrullah Saleh, and the security council were working on a post-American strategy called Kaf, a Dari word meaning “base” or “floor,” which envisioned garrison cities connected by corridors held by the army and bolstered by militias, similar to how President Mohammad Najibullah clung to power for three years after the Soviet withdrawal. “It was very much the Russian model,” said Bek, who returned to the government as the president’s chief of staff that month. “They had a good plan on paper, but for this to work, you needed to be a military genius.”

Earlier in July, Ghani was warned that only two out of seven army corps were still functional, according to a senior Afghan official. Desperate for forces to protect Kandahar City, the president pleaded with the C.I.A. to use the paramilitary army formerly known as counterterrorism pursuit teams, according to Afghan officials. Trained for night raids and clandestine missions in the borderlands, the units had grown into capable light infantry, thousands strong. They were now officially part of the Afghan intelligence service and were known as Zero Units, after codes that corresponded to provinces: 01 was Kabul, 03 was Kandahar and so forth. But according to the officials, the C.I.A. still paid the salaries of these strike forces and had to consent to Ghani’s request for them to defend Kandahar City that month. (A U.S. official stated that the units were under Afghan control; the C.I.A. declined to comment on details of their deployment.) “They’re very effective units, motivated, cheap,” Mohib told me in his office, saying Kandahar would have fallen without them. “They don’t need all sorts of heavy equipment. I wish we had more like them.”

But the Zero Units had a reputation for ruthlessness in battle; both journalists and Human Rights Watch have referred to them as “death squads” — allegations that the C.I.A. denied, saying they were the result of Taliban propaganda. I had been trying to track these shadowy units for years and was surprised to see them, in their distinctive tiger stripes, given glowing coverage on the government’s social media accounts.

In Kabul, I met with Mohammad, an officer from one of the N.D.S. units that operated around the capital, whom I had known for a few years. Mohammad had worked as an interpreter for the unit’s American advisers and as an instructor for undercover teams that carried out arrests inside the cities. He said morale had plummeted among his men, now that the Americans were leaving. According to Afghan officials, the station on Ariana Square was empty by late July. But Mohammad’s team still received advice from the Americans. He showed me messages that he said were from the C.I.A., urging his unit to patrol areas around Kabul that had been infiltrated by the insurgents. “The airport is still in danger,” one message said.

On the Ground at the Russia-Ukraine Border

On the Ground at the Russia-Ukraine BorderMichael Schwirtz📍Reporting from the frontBrendan Hoffman for The New York TimesIf Moscow invades Ukraine with overwhelming force, ∫Skuratovsky said, he and his fellow soldiers will be unlikely to repel it. But they will fight anyway, he added, “because behind us are our families and friends.” Original story from https://www.nytimes.com