Inside the Waldorf Astoria’s $1 billion makeover

This month marks 90 years since the Waldorf Astoria first opened its doors on New York’s Park Avenue in 1931, becoming the tallest and largest luxury hotel in the world during an inauspicious time, as the Great Depression cast its long shadow.

The hotel’s famed Art Deco interiors have been the backdrop of countless galas and benefits for the upper crust, as well as the site of history-making conferences for international politicians. Celebrities including Marilyn Monroe and Frank Sinatra have called it home, while every US President from Herbert Hoover to Barack Obama has laid their head to rest in the presidential suite.

The Waldorf Astoria has been closed for more than four years, undergoing a massive renovation. Credit: Drew Angerer/Getty Images

But the Waldorf Astoria has also been closed for the past four and a half years, undergoing a more than $1 billion renovation after it was purchased for $1.95 billion in 2014 by China’s Anbang Insurance Group (now Dajia Insurance Group). While parts of the hotel are being restored to its original state — rooms including the Grand Ballroom are protected by New York City’s Landmarks Preservation Commission — much of the building is being entirely reimagined for the future. And, for the first time, the Waldorf Astoria will offer residential apartments to own, rather than lease, within the twin Waldorf Towers.

“In the section that I worked on, there was nothing which was landmarked, so there was no starting point, there was no nothing to preserve,” said Jean-Louis Deniot, the French designer tasked with transforming the new apartments and amenities. (The hotel rooms, meanwhile, are being overhauled by Pierre-Yves Rochon.) “I wanted to go more modernist…fresher, but still feel grounded.”

The amenities for residences will include the oasis-like Winter Garden, seen in this rendering. Credit: Courtesy of Waldorf Astoria New York

When the Waldorf Astoria reopens in 2023, it will have 375 hotel rooms, down from 1,400, and 375 condominium units. The for-sale apartments will range from studios starting at $1.8 million to four-bedrooms starting at $18.5 million (plus two penthouses, prices undisclosed). The amenities accessible only to residents will include the skylit 82-foot-long Starlight Pool — formerly the Starlight Roof where Ella Fitzgerald regularly performed — as well as the verdant Winter Garden, a bar and lounge turned into a green oasis.

“There’s something very peaceful and appealing about the sense of serenity of being connected with nature,” Deniot said.

The Starlight Pool will be converted from the hotel’s Starlight Ballroom, where performers including Ella Fitzgerald and Frank Sinatra once sang. Credit: Courtesy of Waldorf Astoria New York

Deniot is designing the residential spaces with the layouts of a private mansion in mind, he said over the phone, conceptualizing rooms for leisure and entertaining, such as the stately Presidential Library and Bar and modern-looking Monte Carlo Gaming Room.

The extensive renovations are the biggest makeover the Waldorf Astoria has received since it opened. But it is actually the second iteration of the hotel — the first, established in 1893, was demolished to make way for the Empire State Building. The first hotel wasn’t immediately beloved, with the Indianapolis Times reporting in 1928 that “people all over the country laughed” at the idea that it would offer 350 private bathrooms, calling the project “Astor’s folly.”

Actress Marilyn Monroe and playwright Arthur Miller at the long-running Paris Ball. Monroe lived in the Waldorf Astoria for a year in 1955. Credit: Bettmann Archive/Getty Images

The hotel was in actuality two buildings — the results of a proverbial measuring contest between two moneyed cousins of the Astor family. William Waldorf Astor, who became the richest man in America thanks to his father’s inheritance, built the Waldorf. Four years later, his cousin, John Jacob Astor IV, doomed to become the wealthiest man to die aboard the Titanic in 1912, built a taller hotel right next door. They eventually dropped the animosity and hyphenated the hotel’s name as well as the buildings, connecting the two through a 300-foot marble corridor dubbed “Peacock Alley.” Among its perks, the Waldorf-Astoria touted that it was the first to offer en-suite bathrooms as well as room service.

But when the Waldorf Astoria started anew on Park Avenue between 49th and 50th Streets, it was no longer in Astor family hands (William Waldorf Astor died in 1919), but in those of hotelier Lucius M. Boomer, who managed the hotel after it was acquired by T. Coleman du Pont in 1918. Following the sale of the site, the board of directors sold him the rights to Waldorf-Astoria name for a dollar as a gesture of goodwill, and he used the bargain to his advantage.

Peacock Alley during the 1910s. The corridor, which connected the original two buildings, was a place for fashionable guests to show off their attire for the evening. Credit: FPG/Getty Images

In the decades that followed, the property entered its heyday, drawing the most famous faces in the world. Suites have been named after Elizabeth Taylor and Winston Churchill following their stays, and Angelina Jolie and Brad Pitt kept an apartment in The Towers over a decade ago. The Waldorf’s other famous long-term residents have included Sinatra and composer Cole Porter, who both stayed in Suite 33A — Porter for 30 years, until his death in 1964, then Sinatra in the 1970s and 1980s. Monroe, meanwhile, occupied Suite 2728 for much of 1955, paying $1,000 a week for the pleasure (around $10,200 today).

When former President Dwight D. Eisenhower and First Lady Mamie Eisenhower moved onto the seventh floor in the 1960s, they chose a floor below The Towers because of her fear of heights, according to the hotel. They had an elevator reconfigured to stop on their floor to give them full access to the Tower amenities.

The Waldorf has retained some of its most famous objects over the years, including Porter’s 1907 Steinway piano. It, along with the hotel’s murals, mosaics and nine-foot lobby clock — an intricate 19th-century timepiece commissioned by Queen Victoria for the 1893 world’s fair in Chicago — will also get a refresh.

Joining them now will be a new collection of artworks curated by auctioneer and art dealer Simon de Pury, showcased in the Towers’ shared amenities. The collection will only feature original art, including pieces from emerging artists such as Taiwanese Canadian sculptor An Te Liu, Korean mixed-media artist ​​Minjung Kim and Swiss painter Philippe Decrauzat.

A rendering of the restored lobby with its famous 19th-century clock. Credit: Courtesy of Waldorf Astoria New York

“Ninety-five percent of hotel projects around the world feature prints and reproductions,” de Pury said over email. “Original art feels much more personal. We made sure to select works that contextually highlight the architecture and décor.”

Renderings have been released of many of the new residential spaces, but the crown jewels — the two penthouses designed by Deniot — are still in the works. With a focus on designing spaces that feel “more contemporary” but still “timeless,” he isn’t necessarily looking to the building’s long history to guide him.

“You don’t want to go too much back in time. There’s that sense of melancholia,” he said. “In the ’40s, ’50s, ’60s, ’70s, they all had great fun in there. The reason why the whole place was refurbished is to actually bring it to the next century.”

Top image: A rendering of a two-bedroom condo, designed by Deniot. 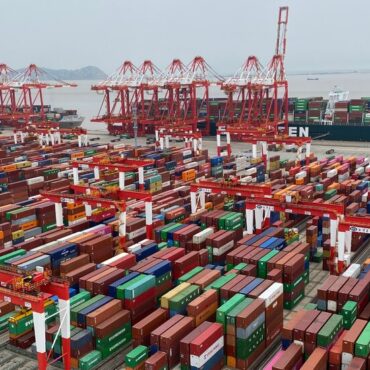 “Against the backdrop of worldwide opposition against Cold War and division, the United States blatantly violated its policy statement of not seeking a new Cold War and ganged up to form an Anglo-Saxon clique,” Wang Yi, the Chinese foreign minister, said on Sept. 28 in response to the Australian submarine deal.The U.S. release of Meng Wanzhou, a Huawei executive who had been detained in Canada at the request of the […]