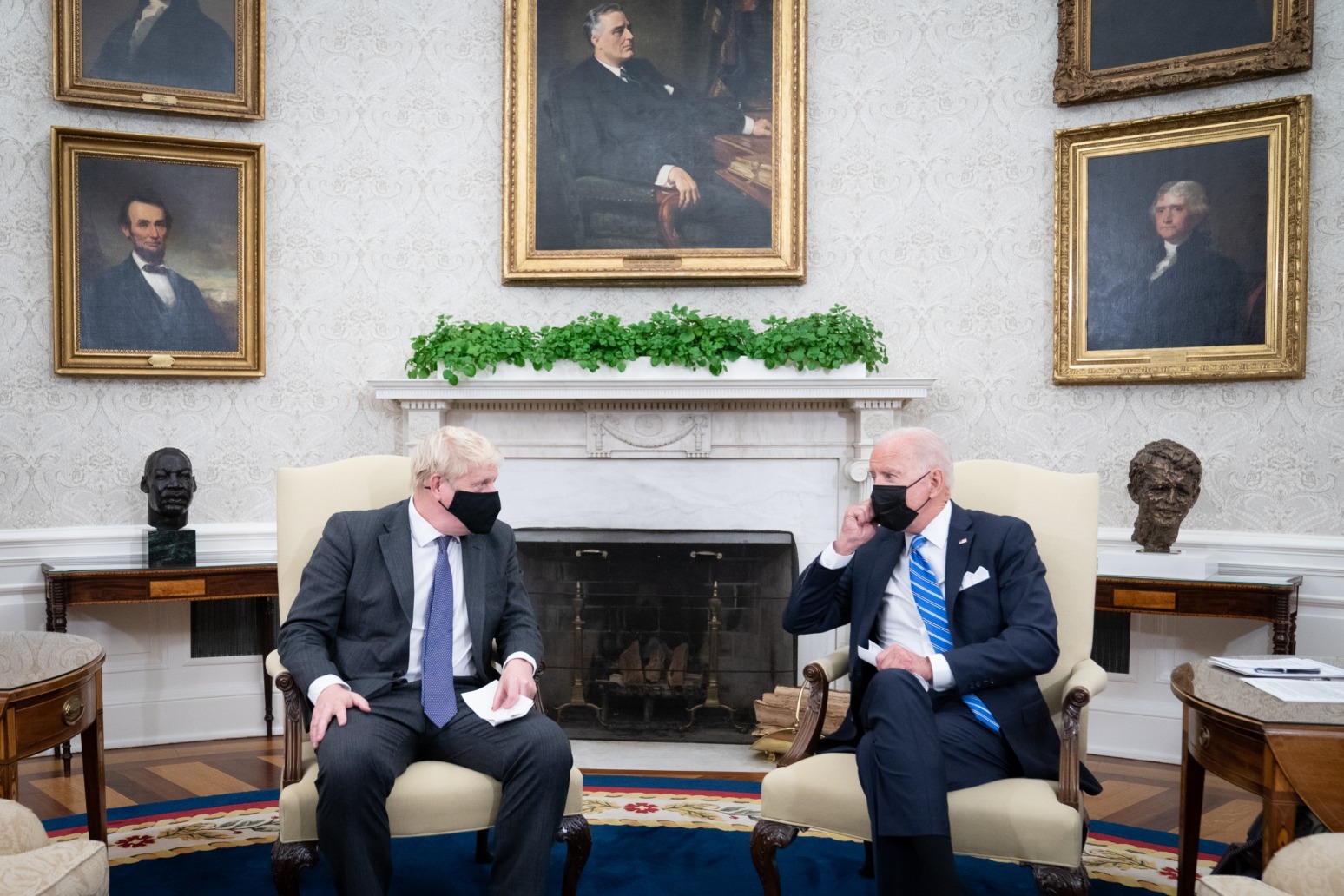 Sitting next to Mr Johnson in the Oval Office, the US President told reporters: “We’re going to talk a little bit about trade today and we’re going to have to work that through.”

Joe Biden downplayed prospects of brokering a post-Brexit trade deal with Boris Johnson, as ministers resorted to considering downgrading their efforts to join an existing pact.

Meeting the Prime Minister in the White House, the US President issued a fresh warning for the UK not to damage the peace process in Northern Ireland over the EU departure.

Mr Biden did not counter the assertion from his predecessor Barack Obama’s that Britain would be at the “back of the queue” for a post-Brexit free trade agreement.

Sitting next to Mr Johnson in the Oval Office, the US President told reporters: “We’re going to talk a little bit about trade today and we’re going to have to work that through.”

The Prime Minister’s first White House meeting with Mr Biden since he succeeded Donald Trump came as the Government’s hopes for securing a comprehensive free trade deal with the US faded.

Ministers were understood to be instead considering whether to join an existing pact with the US, Mexico and Canada to boost trans-Atlantic trade in a major departure from their prior ambitions.

Downing Street said brokering a comprehensive deal with the White House remains “the priority” but did not rule out joining other pacts as a backup.

“Our focus is on the US stand-alone deal and that’s what we’re working towards,” the Prime Minister’s official spokesman said.

Earlier in the day, Mr Johnson was unable to commit to securing the deal – touted as a prize of Brexit by Leave supporters during the EU referendum – before the next election.

Mr Johnson updated the president on the “developments” on the Northern Ireland Protocol since their meeting in Cornwall in June.

Vocally proud of his Irish heritage, Mr Biden said he feels “very strongly” about the issues surrounding the peace process, as problems with the Northern Ireland Protocol persisted.

“And I would not at all like to see, nor I might add would many of my Republican colleagues like to see, a change in the Irish accords, the end result having a closed border in Ireland,” he said.

Mr Johnson said “that’s absolutely right”, adding: “On that point, Joe, we’re completely at one, nobody wants to see anything that interrupts or unbalances the Belfast/Good Friday Agreement.”

But in one possible boost to trans-Atlantic trade, Mr Biden said they are “going to be working on lamb” – with imports currently banned from Britain.

The US president said he was “anxious” to attend the Cop26 climate summit in Glasgow “with bells on”, and said they would continue talks on how to co-operate on Afghanistan.

The pair discussed preventing a humanitarian disaster in Afghanistan following the withdrawal of allied troops and agreed “any international recognition of the Taliban must be coordinated and contingent on the group respecting human rights”.

Mr Biden presented the Prime Minister with a framed photo of their first meeting in Carbis Bay during the G7 Summit and a White House-branded watch, Downing Street said.

And Mr Johnson gave the president a signed copy of astronaut Tim Peake’s book “Hello, Is This Planet Earth?”, with an inscription expressing hopes the book “provides a reminder of what we’re fighting to save as our countries tackle climate change together”.

The Prime Minister first held talks with vice president Kamala Harris after arriving in Washington DC by train from New York, where he has been attending a UN summit.

Mr Johnson told reporters in Manhattan there were “plenty of reason to be optimistic” about getting the free trade agreement (FTA) with the US.

But the Vote Leave figurehead downplayed the prospects of brokering a trade deal by the next election, raising the possibility that he could leave Downing Street without achieving a key ambition for the post-Brexit era.

His concession came after suggesting trade negotiations are not a priority for the US president, who he accepted has “a lot of fish to fry”.

Asked if he would get the deal by 2024, the Prime Minister told Sky News: “We will keep going with free trade deals around the world including in the United States.

“I have plenty of reason to be optimistic about that. But the Americans do negotiate very hard.”

The Prime Minister conceded Britain and the US could have possibly taken a different course over the withdrawal of troops of Afghanistan.

“America has been there for 20 years and it’s a respectable argument to say that enough is enough. Look, I mean, could we have done it a bit differently? Maybe we could,” the Prime Minister told American broadcaster NBC.

Mr Johnson had pleaded with the president to push back his deadline for drawing down all US troops after the Taliban marched back to power.

But Mr Biden rejected the request, meaning potentially thousands of vulnerable Afghans who worked for the UK and their families were left behind.

Travelling on an Amtrak train to DC, Mr Johnson had been buoyed by the announcement the US will drop the blanket ban on travellers arriving from the UK due to the coronavirus crisis.

However, No 10 appeared blindsided by Monday’s announcement, raising questions over the state of communications between the White House and Downing Street.

Just one day before the end of the ban was announced, Mr Johnson was downplaying to reporters any expectations that he could “crack” the issue this week.

Aboard the RAF Voyager on the flight to New York, Mr Johnson also seemed negative about the prospect of getting a trade deal in place any time soon.

“On the FTA, the reality is that Joe has a lot of fish to fry,” Mr Johnson told reporters.

In the run-up to the EU referendum in 2016, then-president Barack Obama warned Britons they would be at the “back of the queue” for any trade deal if they voted for Brexit.

After leaving the White House, Mr Johnson was to have dinner with his Australian counterpart Scott Morrison amid a major diplomatic row with France.

The stoush broke out over a new military pact between the UK, US and Australia because it scuppered a multibillion-dollar contract for France to provide submarines to Australia.

France took the extraordinary step of recalling its ambassadors to Washington and Canberra, but declined to do the same from London, accusing the UK of being America’s lapdog. 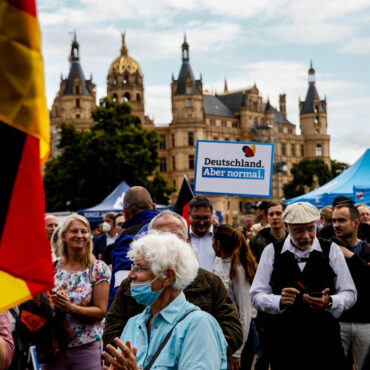 Germany’s Far Right Is Nowhere in the Election. But It’s ‘Here to Stay.’

BERLIN — They promised they would “hunt” the elites. They questioned the need for a Holocaust memorial in Berlin and described Muslim immigrants as “head scarf girls” and “knife men.”Four years ago the Alternative for Germany, or AfD, arrived in the German Parliament like a wrecking ball, the first far-right party to win a place at the heart of Germany’s democracy since World War II. It was a political earthquake […]