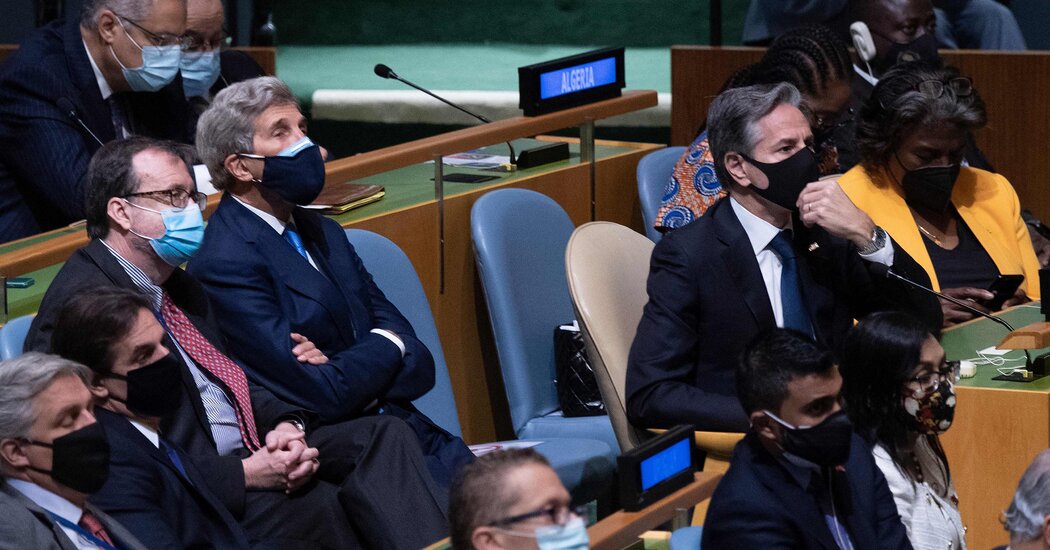 John Kerry, who helped clinch the Paris climate agreement in 2015 as secretary of state and who came out of retirement to become President Biden’s climate envoy, arrives on Monday with a carefully crafted message for the United Nations summit: It is critically important but not the last chance for action.

“Glasgow was never going to be, you know, the definitive one meeting,” he said in a recent interview.

That is in contrast to Mr. Kerry’s comments last month, when he described the summit as “the last best hope” to reduce greenhouse gas emissions enough to avert the worst consequences of climate change.

The aim of the 26th session of the Conference of the Parties to the U.N. climate convention, or COP26, is to galvanize world leaders to cut planet-warming emissions enough to prevent temperatures from rising more than 1.5 degrees compared with preindustrial levels. At that point effects like sea level rise, devastated crop yields and the death of coral reefs become irreversible. Glasgow will be the first time since nations agreed in 2015 to curb emissions that leaders have been asked to ratchet up their targets.

Expectations for the Glasgow summit are high. A banner reading, “The world is looking to you, COP26,” greets arrivals at the airport.

“Where Paris promised, Glasgow must deliver,” Alok Sharma, the British politician who is president of the conference, declared on Sunday at the gathering’s formal opening.

But the reality is that leaders are aware that it will not. China, India, Russia, Australia and Saudi Arabia have issued either weak new plans or none at all to cut carbon emissions from fossil fuels this decade. And the United States, which has an ambitious target of cutting emissions roughly in half by 2030, is failing to pass legislation that could ensure meeting that goal.

Mr. Kerry noted that when Mr. Biden took office few countries had committed to targets that keep 1.5 degrees in reach. “We have pushed and cajoled and negotiated with countless countries,” he said, and now nations representing about 65 percent of the global economic output have ambitious targets for the coming decade.

“Glasgow was never ever going to get every country joining up,” Mr. Kerry said, adding: “It was going to galvanize the raising of ambition on a global basis, and the fact is that ambition will be more significantly increased in Glasgow than at any time.”

Mr. Kerry said he was already looking to next year to build on the pledges that countries have made and push them to do more.

“It is critical that countries lay out better plans,” Mr. Kerry said on Sunday in a call with journalists. “We fight to keep the 1.5 degree goal.”

Written by Megan C. Hills, CNNThe oldest surviving winner of Miss America, Jo-Carroll Dennison, has died aged 97. Dennison, who held the title during World War II and broke with convention by refusing to wear a swimsuit onstage after the pageant, passed away at her home in California last month, according to her friend Evan Mills. Mills, who edited Dennison's memoir and learned of her death directly from her family, […]