‘Like the 1950s’: Inside a community frozen in time

Homesteads dotting a pastoral landscape, families living by lamplight and men in straw hats riding horse-drawn carriages — the scenes in Jake Michaels’ photographs could easily depict bygone times in the American Midwest. But not only do his pictures hail from the digital age, they were taken hundreds of miles away in Belize.

The tiny Central American country is home to around 12,000 of the world’s most conservative Mennonites, a group of Christians that live in closed communities and shun modern technology including, in some cases, electricity. Dating back to 16th-century Europe, the Protestant sect’s members have since moved around the world in search of isolated farmland, and to escape persecution or attempts to integrate them into wider society.

Belize’s colonies date back to the late 1950s, when a group of over 3,000 Canadian Mennonites immigrated there from Mexico. Their arrival followed an agreement with the Belizean government, which offered them land, religious freedom and exemption from certain taxes (and, as committed pacifists, from military service).

In return, the country has enjoyed the fruits of their agriculture. Today, Mennonites dominate Belize’s domestic poultry and dairy markets, despite representing less 4% of the population.

A husband and wife stand outside their home, with only the lush vegetation hinting at the photo’s surprising location: Belize. “Seventy-five percent of the images could be presented in a way where you would never know it’s the tropics,” said photographer Jake Michaels. Credit: Jake Michaels/Courtesy Setanta Books

Hoping to document their traditional way of life, Michaels visited three Mennonite colonies in Belize’s north — Indian Creek, Shipyard and Little Belize. And despite the communities’ apparent aversion to outsiders, he found them surprisingly receptive.

“People were far more hospitable than I expected, and everyone was very understanding, even though my Spanish is not that great,” he said in a phone interview, explaining that the group’s mother tongue is Plautdietsch (or Mennonite Low German), though many also speak Belizean Spanish.

“A lot of time was spent without a camera in my hands. It was more about interacting, socializing and getting to know people before (the photography) even happens.”

Spending time in Mennonites’ family homes and expansive farmland, Michaels discovered a world frozen in time (an idea alluded to by the title of his new book, “c.1950”). But beyond the obvious anachronisms of technology-free homes and women dressed in bonnets, the resulting photographs hint at an idyllic life centered on family — and free from the trappings of modernity.

“My whole practice shifted as the days like went on. My mind slowed down, and I was more present in the surroundings,” he said, adding: “I’m not trying to say that their lives are simple, but I think it, for me, it just allowed me to slow down and be more present.”

But the photographer was also wary of romanticizing this remote way of life.

Permitted to run their own schools, Belize’s Mennonites have literacy rates significantly lower than the country’s other ethnic groups, with just 5% completing formal secondary education. The communities are mostly reliant on commercial agriculture, with colonies organized not only around family and religion, but also labor.

Michaels’ photographs detail these economic realities. They depict Mennonites sorting beans in a dimly-lit room or in plastic aprons at a papaya-packing factory. Other images show men attending a nearby auction and smoke rising into a bright blue sky as land is cleared for farming.

“Their world intersects far more now with the modern world than it did before,” Michaels said. “There are several Mennonites who work in tandem with Belizean people, so they’re aware of the outside world and what’s going on.

“There are good aspects to life, and there are hard aspects to life,” the photographer added. “At the end of the day, people are still making a living … people still have jobs. So, I think it was important to show the whole spectrum of life.”

Like Mennonites elsewhere, Belize’s colonies have both conservative and progressive members, resulting in differing attitudes towards technology. Somewhat unexpectedly, electronic gadgets like cellphones and cameras make occasional appearances in some of Michaels’ pictures.

It is a contrast he exploits to powerful effect. Take the image of a young woman in traditional clothing pointing a small digital camera towards Michaels’ own lens, a photo he described as “one of my favorites from the whole trip.”

“Everything about it seems as if it’s a photo from like the 1950s, but then there’s a modern camera in her hand,” he said, adding that the gradual creep of technology was not necessarily perceived as a threat. “They’re far away in the rolling hills of Belize, so it’s not like there are (competing lifestyles nearby).”

And although the experience has not prompted Michaels to forgo technology himself, it has left a lasting impression on his photography.

“It definitely impacted the way that I shoot going forward,” he added. “It made me more interactive and more social with people rather, than just taking photos.” 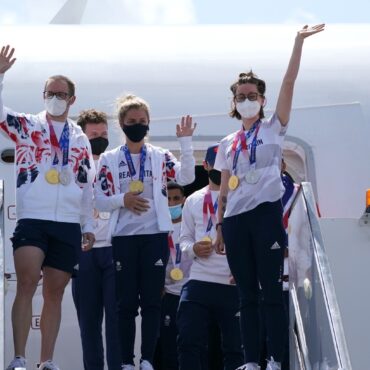 The Queen has praised the “skill, determination and hard work” of the nation’s Olympic competitors after Team GB put in one of its best performances. Team GBs 65-medal haul in Japan matched the number earned during the Olympics in London in 2012, and is only two short of the record Rio total in 2016. There were 22 gold medals won – the fourth-best performance by a British team. In her […]