Macron and Scholz Meet and Call for More ‘European Sovereignty’ 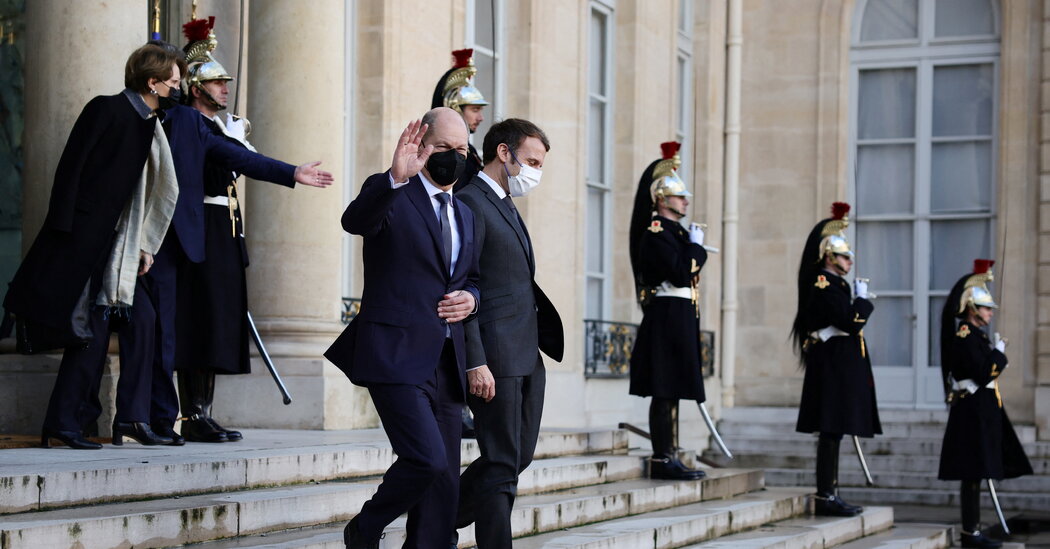 PARIS — On the face of it, President Emmanuel Macron, a showman, and Chancellor Olaf Scholz, a study in reserve, would not be natural companions. But the world has changed, and for France and Germany the imperative of building what they call a “sovereign Europe” has become overwhelming.

So Mr. Scholz, who took over from Angela Merkel on Wednesday, chose France as his first foreign destination, not only because that tends to be what newly installed German chancellors do, but also because, as he said standing beside Mr. Macron in Paris Friday, “We want to reinforce Europe, work together for European sovereignty.”

The two men, who first met in Hamburg in 2014, held a working lunch at the presidential palace that reflected “the essential need to meet quickly,” as Mr. Scholz put it afterward at a 20-minute news conference. “Our first exchanges demonstrated a solid convergence of views,” Mr. Macron said.

Their tone was serious but convivial, with Mr. Macron referring repeatedly to “dear Olaf” and using the less formal “tu,” rather than “vous,” when addressing the chancellor. At the end of the news conference they fist-bumped — a far cry from President François Mitterrand and Chancellor Helmut Kohl holding hands on the battlefield of Verdun in 1984, but a Covid-era indication of friendship.

Mr. Scholz’s embrace of “European sovereignty” was surely music to Mr. Macron’s ears, as he prepares to take over the rotating six-month presidency of the European Union on Jan. 1. The bloc faces an immediate crisis as Russia builds up troops on the Ukrainian border and the coronavirus pandemic refuses to wane.

Asked about the Russian buildup, Mr. Scholz said, “It is clear to all of us that there is no alternative to de-escalation.” Mr. Macron, who seemed skeptical of any imminent Russian threat, said, “We must avoid all useless tension.”

Mr. Macron’s vision for a Europe of “power,” backed by real European military and technological capacity, tends toward the grandiose. Mr. Scholz may not like that style — his coalition prefers the more prosaic “enhancing European capacity to act” — but the general goal is intensely shared, perhaps more so than in the later Merkel years or at any time since the Cold War.

The distance from shared goals to shared action in the European Union is always great because 27 countries have to be aligned. Still, the trauma of Covid-19 and its accompanying economic challenges have brought urgency, as has a sense of European vulnerability in a more unstable world where American leadership is no longer assured.

“I’m more optimistic than I was with Ms. Merkel toward the end,” said Wolfgang Ischinger, a veteran German diplomat. “We have a window of opportunity.”

That window may be narrow. Any joint Franco-German plans could be rudely interrupted in April if Mr. Macron is defeated in the presidential election. He is the favorite, but if France lurched toward the ascendant nationalist hard right, all bets would be off. A German priority in the coming months will be to avoid that outcome, making accommodating gestures toward Mr. Macron more likely.

France and Germany have always been the motor of European integration; when they stall, so does the whole project. Although the need to confront the pandemic brought budgetary breakthroughs, Europe has found itself in the shadow of Brexit and internal division while China rose and the United States turned its attention elsewhere.

The 177-page coalition agreement of Mr. Scholz’s three-party government alludes to ultimate evolution toward a “federal European state.” Mr. Macron, with the election in mind, has not gone that far — the French attachment to the nation is fierce — but the mere German mention of a United States of Europe suggests new boldness and revived ambition.

Still, there are differences. Where Mr. Macron speaks of European “strategic autonomy,” Mr. Scholz prefers “strategic sovereignty.” The difference is not small.

“Germans do not want strategic autonomy if that means independence from the United States,” said Cathryn Clüver, the director of the German Council on Foreign Relations.

The French president offered some de rigueur praise of NATO when laying out his European presidency program Thursday. He said it had proved its “usefulness.” But he broadly views European independence as an emancipation from the United States.

Germany, intensely attached for historical reasons to the American anchor of European security, is wary of any strategic distancing from Washington. This view is broadly shared in several European Union states, including Poland, Hungary and the Czech Republic, especially at a time when Russian troops are massed on the Ukrainian border.

All this complicates both the meaning and the attainability of whatever European sovereignty may be.

France and Germany share the view that they preserved a multilateral global system based on the rule of law and Western values while the United States, under former President Donald J. Trump, embraced nationalism and disparaged Europe.

They have not been reassured by what they see as paltry consultation from the Biden administration on Afghanistan and the sale of nuclear submarines to Australia. They see a growing ideological and economic threat from China. Hence the determination to make a more independent and innovative Europe count.

The post-Merkel era begins. For the first time in 16 years, Germany has a center-left government and a new chancellor, Olaf Scholz, whose job will be to fill the shoes of Angela Merkel. Here’s what to know about the new government:

Who is Olaf Scholz? A lifelong Social Democrat, Mr. Scholz, 63, has been a familiar face in German politics and served in two governments led by Ms. Merkel’s Christian Democratic Party, most recently as her finance minister. But he has also been something of a political chameleon.

An uncommon coalition. The new government led by Mr. Scholz brings together three parties — the Social Democrats, the environmentalist Greens and the pro-business Free Democrats. It is the first time since the 1950s that three partners have formed a government.

The governing deal. Despite their differences, the parties said they had found enough common ground to push forward with plans to beat back the pandemic, increase the minimum wage, address climate change and legalize marijuana.

The pandemic offers a crucial test. A spike in cases has thrust Germany into its worst crisis of the pandemic, vaulting the issue to the top of the coalition’s agenda. But in its first test, the incoming government sent mixed signals before the latest wave forced a retreat to tougher measures.

Foreign policy crises await. Rarely has a German leader come into office with so many burning crises. Mr. Scholz will have to deal with tensions on the Polish-Belarusian border, a Russian president mobilizing troops near Ukraine, a more confrontational China and a less dependable U.S.

“The last big European innovation was the euro,” said Mr. Ischinger. “Since then we have rested on our laurels. It’s time for the next round of innovation.” The euro was introduced almost two decades ago.

Healing the pandemic-battered economy will be central to any European leap forward. Both leaders intimated Friday that they are prepared to build on the European Union’s groundbreaking $750 billion recovery fund, created 18 months ago to fight the ravages of the coronavirus.

“The recovery and reconstruction fund is a formidable example of what we can accomplish,” Mr. Scholz said. “At the same time we must work on the solidity of our finances. This is not contradictory in my view.”

Mr. Macron, as is his inclination, was bolder. He said Europe must adopt new rules, or find new flexibility, to ensure that the union moves toward full employment and “builds the channels of innovation and industry that will allow Europe to have a greener, more digital, and more sovereign economy, all of which implies massive investments.”

The French president argued Thursday, before meeting Mr. Scholz, that the European Union’s stringent ceiling on annual budget deficits — 3 percent of a country’s gross domestic product — should not stand in the way of ambitious investment strategies.

“We have to leave old taboos and old fetishes behind,” Mr. Macron said.

Germany, whose perennial specters include the hyperinflation of the 1920s, would tend to regard fiscal discipline as a useful fetish.

In general, while French proposals for a more powerful Europe tend toward soaring rhetoric, Germany is focused on the practical.

Mr. Scholz’s coalition agreement calls for the introduction of qualified majority voting on foreign policy decisions — a step that would likely make Europe far more effective in emergencies. France has not been prepared to accept this because of its attachment to national sovereignty and because its army, the most capable in the union following Britain’s departure, might be left with responsibility for a decision France did not endorse.

Similarly, at the United Nations, where France has a permanent seat on the Security Council, “it rarely speaks as a European power, it speaks as France,” said Christoph Heusgen, the former chief policy adviser to Ms. Merkel and now president of the Munich Security Conference. “The enthusiasm for Europe to speak with one voice stops there.”

Ms. Scholz will spend the rest of the day in Brussels, at NATO and the European Commission — also stops that are part of established German post-election protocol.

Where Do Your Spices Come From?

Where Do Your Spices Come From?Aina J. Khan📍Reporting from ZanzibarYou might know cardamom, cinnamon and nutmeg as the spices you mix into coffee or chai blends. But where do they come from? I visited a spice farm in Zanzibar, an archipelago off the east coast of Tanzania, to find out.Here’s what I learned → Original story from https://www.nytimes.com