Francois Olwage will be sentenced at the end of April

A Metropolitan Police counter-terrorism officer has been found guilty of three child sex offences, after he arranged to a meet a 13-year-old girl for sex when he was “on duty working from home”.

Francois Olwage, a detective constable who was serving with the Met’s specialist operations unit, was convicted of grooming what he believed to be a 13-year-old girl he had met on the Lycos online chat forum.

But Winchester Crown Court heard that the 52-year-old defendant was actually chatting with an undercover police officer pretending to be the girl using the username of Smile Bear, before moving to WhatsApp using the name Caitlin.

The trial heard that after two weeks of explicit sexual conversations in October 2021, Olwage, of Stevenage, Hertfordshire, arranged to meet the “girl”, who had told him that she lived in Basingstoke, Hampshire.

Peter Shaw, prosecuting, told the jury that Olwage had been listed as “on duty working from home” on October 28, 2022, the date he travelled by train to Basingstoke with the aim of meeting the “girl”.

Olwage was arrested at a McDonald’s restaurant in Basingstoke by two undercover officers as he was about to buy a McFlurry ice cream to take to his meeting with “Caitlin”.

When searched, the officers found in his bag two condoms, a bottle of lubricant and a packet of Tadalafil erectile disfunction tablets.

There was also a box of Ferrero Rocher chocolates which Mr Shaw suggested was a present for the “girl”.

Olwage told the court that he “never believed” Smile Bear was a 13-year-old girl and that he thought it was an adult “playing out a fantasy”.

He also denied any sexual interest in children.

Olwage was convicted of attempted sexual communication with a child, attempting to cause/incite a girl aged 13 to engage in sexual activity, and attempting to meet a girl under the age of 16 following grooming.

He also pleaded guilty at the start of the trial to an offence of improperly exercising his police powers and privileges in order to receive the “benefit of sexual gratification”.

The judge ordered the jury to find him not guilty of arranging/facilitating the commission of a child sex offence.

Adjourning the case for sentencing, Judge Jane Miller QC told Olwage: “In view of the jury’s verdicts you fall to be sentenced and you will be remanded in custody until 27th April when sentence will take place.”

The Met described the officer’s crimes as “deplorable” and confirmed he will face misconduct proceedings following the conviction, saying a date would be set as soon as possible for an accelerated hearing.

Detective Chief Superintendent Donna Smith, of the force’s Directorate of Professional Standards, said: “These are appalling crimes, and the fact that these crimes were committed by a police officer makes them all the more deplorable.

“It goes without saying that officers who behave like Olwage have no place in the Metropolitan Police Service. His offending is deeply disturbing and shocking, and he has now rightly been brought to justice thanks to an investigation by colleagues from Hertfordshire Police.” 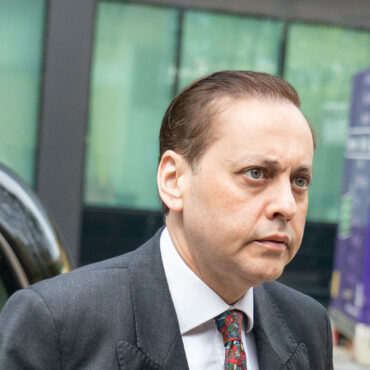 He was convicted of assaulting a teenager earlier this week Boris Johnson faces a potentially challenging by-election in Wakefield after the former Tory MP for the constituency resigned after his conviction for sexually assaulting a boy. Imran Ahmad Khan had been resisting calls to stand down despite the Conservatives expelling him when he was found guilty this week. But on Thursday the disgraced politician said he would resign, saying it […]