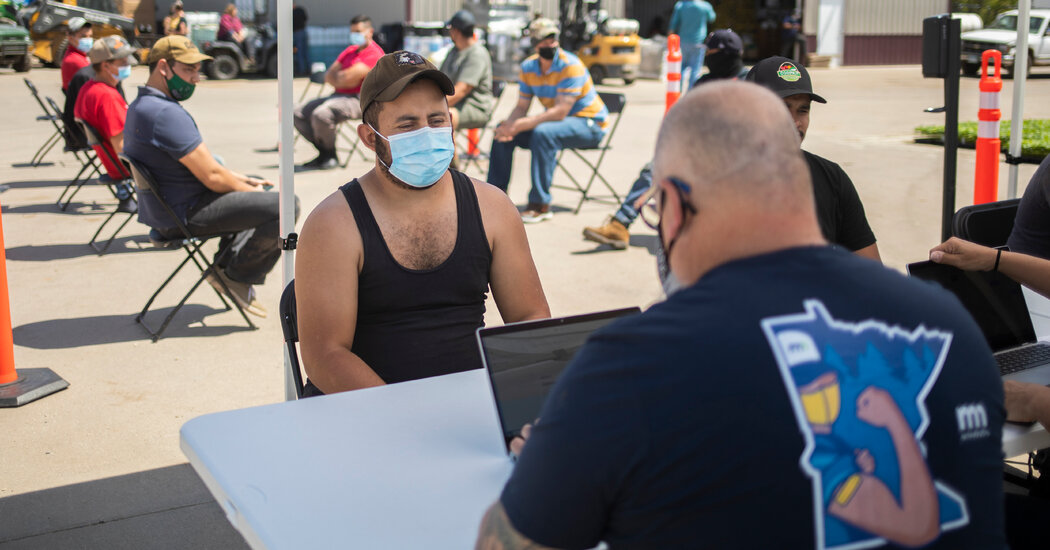 Intensive care units are nearing capacity and health care workers are in short supply in Minnesota, as coronavirus cases, hospitalizations and deaths all reach levels not seen since vaccines became widely available.

All of the state’s counties are at high risk for community transmission, according to the Centers for Disease Control and Prevention. New daily cases have risen by 29 percent in the last two weeks and hospitalizations by 17 percent, according to a New York Times database.

The state’s daily case average is at its highest level for 2021 and reached 2,932 on Monday, a dramatic increase since the summer, when it bottomed out at an average of 81 daily cases.

While a monthslong increase driven by the Delta virus variant is waning in much of the country, Minnesota is just one of several Upper Midwestern and Mountain West states where the virus is surging. Cases are up and hospitals have been overwhelmed in North Dakota, Wyoming, Montana and Idaho, all of which have low vaccination rates. Some areas have had to ration care and send patients to distant hospitals for treatment.

The Minnesota Department of Health said the state’s surge is overwhelming hospitals, with rural and metropolitan areas equally stretched.

“Even before Covid cases started to rise in this latest surge, our hospitals were very full with patients needing care for other critical conditions,” Jan Malcolm, the state’s health commissioner, said in a news conference last week.

According to a state health department database, 96 percent of I.C.U. beds in Minnesota are in use along with 93 percent of non-intensive care beds. Although beds are almost at capacity, the state is equipped with respirators to combat the surge, Ms. Malcolm said. The bigger issue now is a shortage of medical personnel, she said.

“What’s important to understand is that this isn’t so much about the physical asset of a hospital bed or a ventilator, and those were big focuses earlier in the pandemic, but now this is really an issue of health care worker capacity,” Ms. Malcolm said. “There are actually fewer health care workers on the job today than there were last year due to the extreme stress and burnout that they have faced for over 18 months now.”

Both hospitals run by North Memorial — North Memorial in Robbinsdale and Maple Grove Hospital — are almost running at capacity and are experiencing staffing shortages that have reached a “critical level.”

“Staff vacancies are increasing while our customer patient volumes remain high,” Mr. Croston said. “We have rapidly escalated measures to attract and retain talent in health care and that’s adding more expense to an already stressed financial picture for all these health care systems.”

He also noted that all patients hospitalized with Covid were unvaccinated.

“With the amount of virus that’s out there and the amount of the population that is not protected by the vaccine, there’s unfortunately plenty of room for the virus to still do its harm,” Ms. Malcolm said.

LONDON — The British Environment Agency on Wednesday urged world leaders to take decisive action to combat climate change, issuing a stark warning before a U.N. summit in Glasgow this month when some 20,000 delegates from nearly every country will discuss ways to tackle potentially disastrous global warming.“It is adapt or die,” Emma Howard Boyd, chairwoman of the government agency, said in a report to the British government.Deadly floods like […]