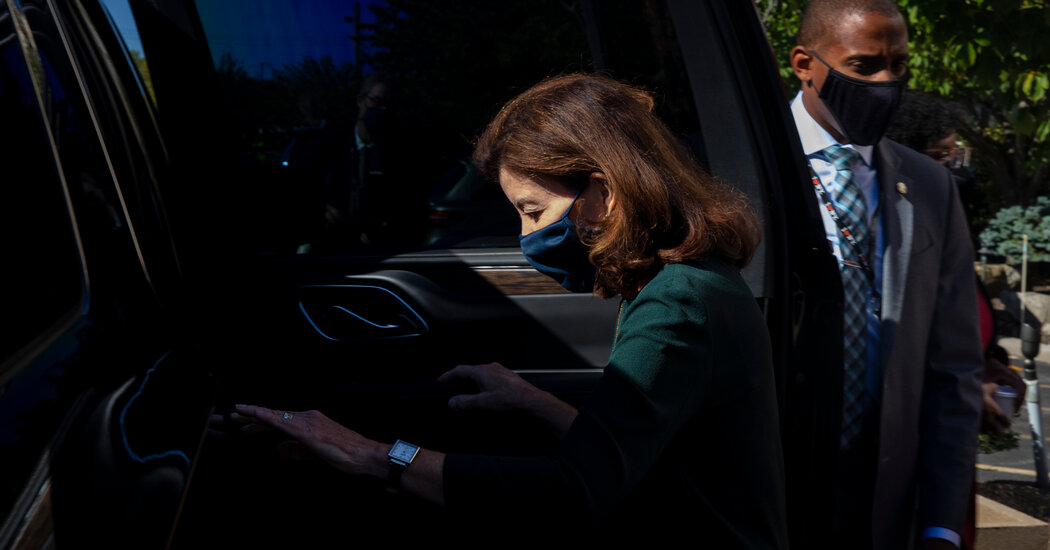 Tens of thousands of health care workers in New York appeared to be risking their jobs by defying a state mandate to receive a dose of a coronavirus vaccine by Monday, setting up an early test for similar employer mandates across the United States.

Gov. Kathy C. Hochul’s success at enforcing the mandate could shape how other states proceed, as President Biden pushes for every person working in a health care setting to be fully vaccinated against Covid-19.

In New York, Rhode Island, Maine, Oregon and the District of Columbia, health care workers must get vaccinated to remain employed. In California, New Jersey, Pennsylvania, Maryland and Illinois, workers have the option to be tested regularly if they choose not to get inoculated.

On Monday, Mayor Bill de Blasio said he hoped that health care workers in New York City would agree to get vaccinated this week to avoid losing their livelihood. His administration said that about 5,000 employees at the city’s public hospital system — roughly 10 percent of the work force — had not been vaccinated and could not come to work or get paid.

Health officials in New York City said on Monday that they had not heard of any major staff shortages at public or private hospitals so far. The city’s health commissioner, Dr. Dave Chokshi, said that some hospitals might have to make operational adjustments in intensive care units or operating rooms.

“I do believe that hospitals will be prepared to get through this without a major impact to patient care,” Dr. Chokshi said at a news conference Monday morning.

Resistance to vaccine mandates has deterred most states from threatening to fire unvaccinated workers, even though employers (or state governments, in their capacity as employers) are legally allowed to require workers to get vaccinated, according to the U.S. Equal Employment Opportunity Commission.

New York’s mandate and the state’s refusal to allow religious exemptions are the subject of at least two lawsuits. A vaccine mandate for the more than 150,000 adults working at New York City’s public schools was delayed by a federal appeals court on Friday.

Many of New York’s health care workers have resisted the order because they are worried about potential side effects from the vaccines, or have challenged it because they say it violates their personal freedom. Covid vaccines have proven to be highly effective at preventing symptomatic infections, severe illness and death, and side effects of the vaccine, if any, tend to be minor and short-lived.

New York officials are bracing for possible staffing disruptions at health care facilities. Ms. Hochul said on Friday that she might declare a state of emergency and deploy National Guard troops, or even recruit temporary workers from the Philippines or Ireland, if they are needed to replace unvaccinated health care workers.

As New York begins its post-pandemic life, we explore Covid’s lasting impact on the city.

On Monday, Ms. Hochul reiterated that the state was prepared to work with hospitals to address any staff shortages, and repeatedly labeled potential shortages as “preventable.”

“It’s not a role I relish,” Ms. Hochul said about enforcing the state mandate. “But I also realistically know that there are people who will not come back to their jobs.”

Ms. Hochul said she had heard anecdotally from medical practitioners and hospital systems that some facilities, especially those located in the downstate region, were seeing an increase in the number of health care workers getting vaccinated on Monday. She said, however, that there would be some lag time in compiling updated statewide figures.

Ms. Hochul, who has said she intended to seek election to a full term as governor in 2022, thanked workers who had already gotten vaccinated on Monday, and pleaded with holdouts to join them.

“To those who have not yet made that decision, please do the right thing,” she said during a news conference in the Bronx. “We have a lot of facilities. A lot of your employers are anxious to just give you the jab in the arm and say you’re part of the family. We need your help to continue on.”

Ms. Hochul, who has been in office for just over a month, taking over after former Gov. Andrew M. Cuomo resigned, faced her first crisis earlier this month when Hurricane Ida’s downpours led to at least 15 deaths in the state. Pushback over the vaccine mandate is likely to be her next major test.

In New York City, public health workers who refused to get vaccinated were not being fired on Monday. City officials said they hoped that workers would get vaccinated this week and return to work.

Mr. de Blasio said on Monday that he was optimistic that his vaccine mandate for school employees would hold up in court. He said that 90 percent of teachers in the city were already vaccinated.

“We are very, very confident that the city is going to prevail,” Mr. de Blasio said. 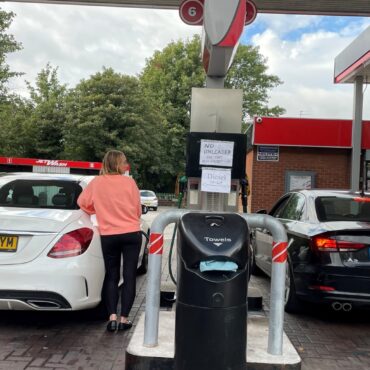 Motorists are being hit by fuel prices rising to an eight-year high amid shortages at filling stations. RAC figures show the average price of a litre of petrol across the UK increased from 135.87p on Friday to 136.59p on Sunday. Pump prices have not been that high since September 2013. The RAC warned that the situation could worsen as retailers pass on the cost of rising wholesale prices. The wholesale […]