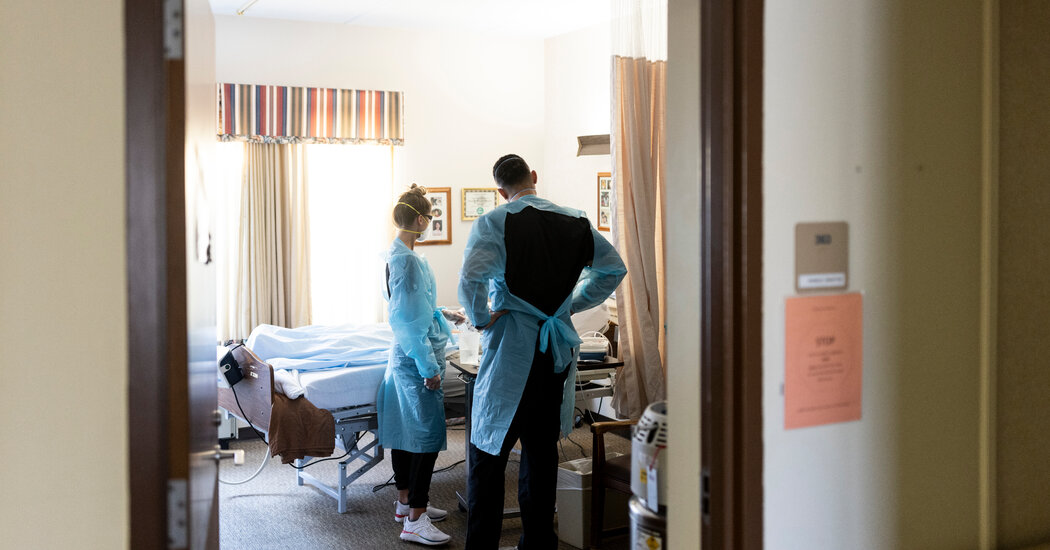 NEW HOPE, Minn. — Pfc. Shina Vang and his fellow soldiers in the Minnesota National Guard have had an exceptionally busy year. They helped process Afghan refugees fleeing Kabul for the United States, provided security at American military bases across the Horn of Africa and stood sentinel in Washington, D.C., following the Jan. 6 attacks on the U.S. Capitol.

They also deployed across Minnesota during the civil unrest prompted by the police killings of George Floyd in Minneapolis and Daunte Wright in nearby Brooklyn Center.

But none of those experiences prepared Private Vang and his fellow Guard members for their latest deployment: collecting bedpans, clipping toenails and feeding residents at North Ridge Health and Rehab, a sprawling nursing home in suburban Minneapolis that is the largest in the state.

“I’ve had protesters throw apples and water bottles at me but that doesn’t compare to the challenge of giving someone a bed bath,” Private Vang said.

Over the past two weeks, 30 Guard members have been working as certified nursing assistants at North Ridge, which has been so badly hobbled by an exodus of employees that administrators have been forced to mothball entire wings, severely limiting new admissions.

As a result, hospitals cannot send patients to long-term care centers like North Ridge, creating a backup that is eroding Minnesota’s capacity to treat people with Covid-19 and other medical emergencies. Similar backlogs are choking health systems across the country.

“It’s beyond a crisis,” said Katie Smith Sloan, the president of LeadingAge, an association of nonprofit long-term care facilities.

On Tuesday, President Biden announced that 1,000 military medical professionals would be dispatched to hospitals across the country this winter to help overwhelmed doctors and nurses.

Public health experts fear the worst is yet to come as the highly transmissible Omicron variant spreads to communities where health care workers are already straining to handle the surge of patients sickened by Delta. Maine, New Hampshire, Indiana and New York have deployed the National Guard to overburdened hospitals and nursing homes in recent weeks, but Minnesota’s initiative may be the most ambitious, with 400 guard members who have no previous nursing experience going through rapid-fire training before being sent to long-term care facilities across the state.

The Duke and Duchess of Sussex have released the first picture of their daughter Lilibet, with Meghan holding her up in an image on their “family holiday” card. The Duke and Duchess of Sussex have sent their best wishes to supporters in a message featuring the first publicly-released photograph of their baby daughter Lilibet. The card shows Harry and Meghan smiling at Lilibet as the duchess holds her aloft, while […]