BRUSSELS — NATO foreign ministers rejected any possibility of intervening against Russian forces in Ukraine, whether on the ground or in the air, the alliance’s secretary general said Friday.

“Allies agree we should not have NATO planes operating over Ukrainian air space or NATO troops operating in Ukrainian territory,” Jens Stoltenberg, the secretary general, said at a news conference after a meeting of foreign ministers.

Ukrainian officials have called for a no-fly zone over Ukraine’s air space, but NATO is resisting for fear that it could draw member states into a war with Russia.

“We understand the desperation, but if we did that, we would end up with something that could lead to a full-fledged war in Europe involving much more countries and much more suffering,” he said. “We will provide support, but we will not be part of the conflict.”

“Our country is ready to fight. We continue to battle the Russian invasion, but we need immediate help in repelling Russian attacks in the air,” he told the meeting, according to the online news site Ukrayinska Pravda. “If you do not do this, you will have to share the responsibility for the lives and suffering of the civilian population of Ukraine who are being killed by rocket attacks from Russian planes.”

The allies agreed to step up their support for other countries that are threatened by Russian subversion and even military action, Mr. Stoltenberg said. He cited Moldova, Georgia and Bosnia-Herzegovina, all of which NATO is already assisting. Like Ukraine, none is a member of the alliance.

Mr. Stoltenberg called on President Vladimir V. Putin of Russia to stop the war and, at least, allow the creation of humanitarian corridors for civilians suffering in Ukraine.

“This is President Putin’s war, one he has chosen, planned and is waging against a peaceful country. We call on President Putin to stop this war immediately, withdraw all his forces without conditions and engage in genuine diplomacy now,” he said.

He also said NATO had verified Russia’s use of cluster bombs in Ukraine.

“We have seen the use of cluster bombs, and we have seen reports of use of other types of weapons which would be in violation of international law,” he said. He did not specify any other kind of weapon.

Anti-personnel cluster munitions are rockets, missiles, artillery shells and bombs that deploy a large number of small explosives over a wide area, intended to attack infantry formations. The Convention on Cluster Munitions, a treaty banning such weapons, took effect in August 2010.

NATO forces used cluster bombs during the Kosovo war in 1999, and the United States dropped more than 1,000 cluster bombs in Afghanistan from October 2001 to March 2002, according to a Human Rights Watch report. 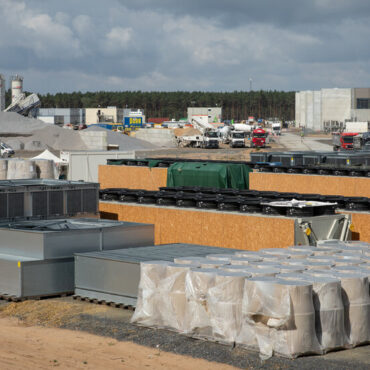 BERLIN — German authorities gave final approval on Friday for Tesla to begin production of electric vehicles and battery cells at its first major assembly plant in Europe, after months of delays and disputes, paving the way for the electric car company to begin production of its Model Y sport utility vehicle.Tesla posted record-breaking sales in 2021, a year when it became the industry’s first trillion-dollar automaker. The new plant, […]