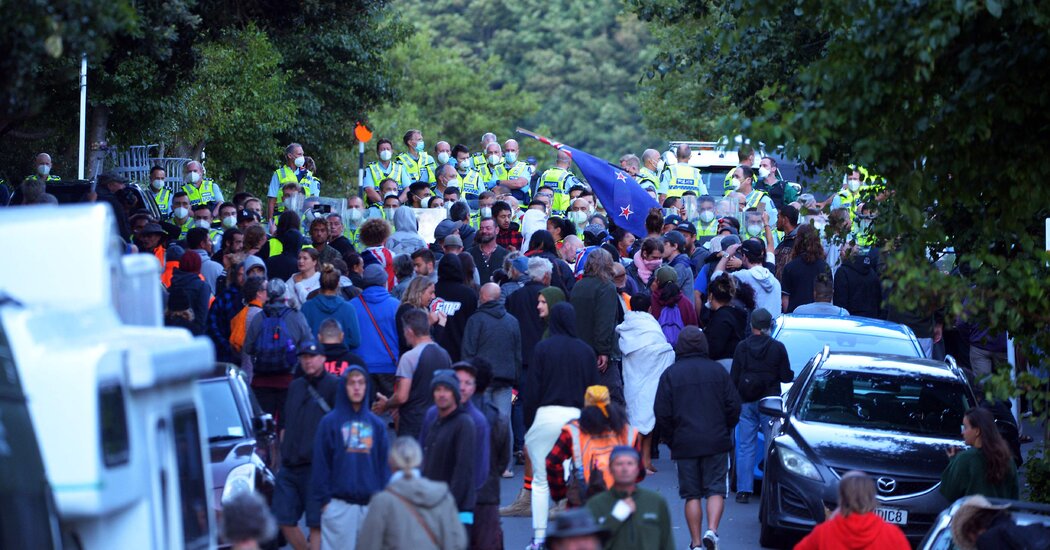 WELLINGTON, New Zealand — The antigovernment protests that jolted Canada have been quashed. But 9,000 miles away, in the capital of another Western democracy largely unaccustomed to violent tears in the social fabric, an occupation on the grounds of Parliament has entrenched itself and turned increasingly ominous.

Hundreds of demonstrators opposed to New Zealand’s Covid-19 vaccine mandate are in their third week of encampment in Wellington, erecting tents, illegally parking vehicles and establishing communal kitchens and toilets in a deliberate echo of the Canadian siege.

Initially, the New Zealand occupation had a carnival atmosphere, with a popcorn stand and a doughnut truck and a number of children brought in by their parents. New Zealanders joked that it was the country’s only Omicron-era music festival: Officials blared Barry Manilow and James Blunt to try to drive out the protesters, who responded with some Twisted Sister of their own.

In recent days, however, after the police moved to evict some protesters, the demonstration has grown more violent. On Monday, protesters threw feces at the police. On Tuesday, a driver tried to ram a car into a large group of officers, and three other members of the force required medical attention after protesters sprayed them with what a police statement called a “stinging substance.”

Many demonstrators describe Prime Minister Jacinda Ardern, a global symbol of the political left, as a dictator. Some have threatened journalists and politicians with execution. Others have shouted at students wearing masks on their way to school. Many espouse support for conspiracy theories like those of QAnon.

While the protesters represent a tiny minority of New Zealanders, the division is notable in a country that has been lauded for its highly effective response to Covid-19. The escalating words and violence, experts say, demonstrate the dangerous influence that exported American disinformation is having on otherwise stable democracies around the world.

“There is a tsunami of bile every day,” said Sanjana Hattotuwa, a researcher at the New Zealand think tank Te Pūnaha Matatini who studies disinformation. It is “a torrent of hate and harm directed towards individuals promoting the vaccine and the prime minister.”

Although rifts were already present in New Zealand society, they were “exacerbated by conspiracism which had its genesis outside the country,” Dr. Hattotuwa said. “Everything which you would associate with QAnon in the United States is here.”

The protesters were initially united under the banner of opposition to vaccine mandates, which cover workers in certain fields in New Zealand. But they encompass a variety of people, including vaccine skeptics, those aggrieved by mandate-related job losses and far-right conspiracy theorists.

The weekslong protests in Canada, which began as a response to vaccine mandates for truck drivers, were broken up on Saturday with tear gas and mass arrests. In New Zealand, by contrast, the police have proceeded more carefully, in part because of early challenges and still-fresh memories of a brutal crackdown on protesters four decades ago.

On the protest’s third day, when officers attempted to dislodge some demonstrators, more extreme protesters sidelined the occupation’s organizers and pushed back against the police. After a daylong struggle in which children were placed on the protest’s front line, the police were repelled.

Since then, officers have cautiously patrolled the protest. The police commissioner, Andrew Coster, who was appointed to the role in 2020 after emphasizing the importance of maintaining public support for the force, expressed concern that more confrontational tactics could lead to bloody clashes.

Mr. Coster invoked the so-called Springbok tour of 1981, when thousands of New Zealanders protested against the traveling rugby team from apartheid South Africa. The police violently broke up those protests, including by using batons against protesters on Molesworth Street — a street that anti-mandate protesters now occupy. The episode harmed the police’s reputation for decades.

On Sunday, in an interview with TVNZ, Mr. Coster emphasized his reluctance to repeat that experience. “If we look to the low points of policing in our country, we would look to points like the Springbok tour,” he said.

But the police’s reluctance to take stronger action seems to have emboldened the protesters.

Many hundreds more people and cars joined. The occupation consumed nearby streets and shut down wider Wellington, with businesses closing after demonstrators harassed staff members for requiring masks and proof of vaccination. In anticipation of a long stay, some protesters drilled holes into the ground to anchor their tents. New protests emerged in other cities.

Some protesters have relished being part of what they see as a global movement. Reuben Michael, a demonstrator who was sitting at the occupation’s eastern edge on Wednesday, noted that “this phenomenon has gone around the world.”

The New Zealand protesters have successfully forced a conversation about vaccine mandates. On Monday, in what many saw as an effort to encourage the protesters to leave, Ms. Ardern said that vaccine mandates were likely to end after the current Omicron outbreak peaks in the coming months.

But the protesters have largely dismissed the prime minister’s comments. One young woman sitting on the steps of a parliamentary war memorial angrily insisted, “She’s told too many lies. It’s too hard to trust her.”

While the police have not moved decisively against the demonstrators, concerns about increasing radicalization, as well as wider public dissatisfaction with the occupation, have prompted officers to take more active steps to contain the occupation.

On Monday, the police escorted forklifts carrying large concrete blocks to establish a border around the protest. During early-morning operations in the days since, the police have begun shrinking that border to try to squeeze protesters into leaving.

The number of protesters appears to have dwindled. But they have left behind a group that shows little interest in de-escalation, prompting concerns that violence is increasingly likely.

When five male protesters sitting on the lawn of an occupied law school were asked what would happen if the police tried to evict them, one answered, “We’ll hold our line.” A second noted, “There might be bloodshed,” prompting a third to insist, “But it’ll be peaceful.”

The second protester paused, then emphasized, “We’ll stay to the end.” 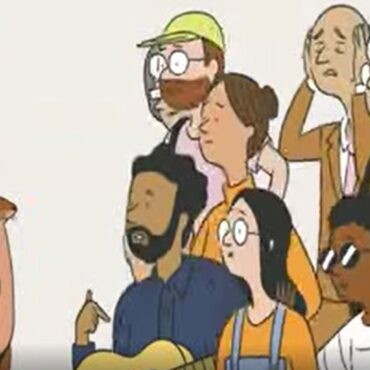 The smoothies can't fix global warming... Ads encouraging consumers to “get fixing up the planet” by choosing Innocent drinks have been banned for exaggerating the environmental benefit of the products. The TV, YouTube and video on demand ads showed animated characters singing the lyrics: “We’re messing up the planet. We’re messing up real good,” against a backdrop of buildings and vehicles expelling pollutants, litter and dirty rivers. An otter then […]