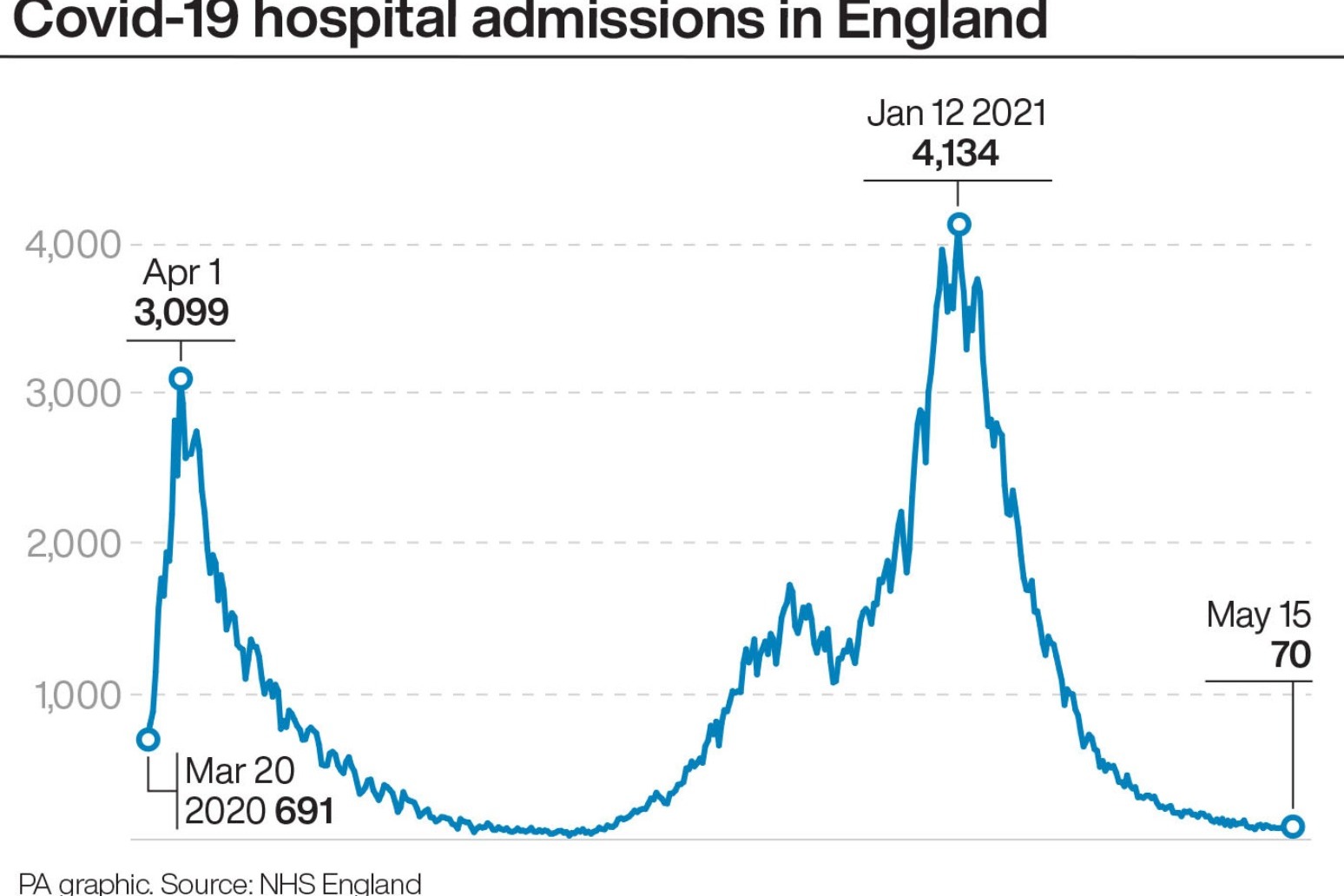 The number of patients in hospital in England with Covid-19 has dropped to its lowest level for eight months, figures show.

This is the lowest number since 691 on September 13 2020, according to analysis by the PA news agency.

Ahead of the second wave, the number dropped as low as 451 on September 2.

A regional breakdown of the figures does not show any clear signs of an overall increase in hospitalisations caused by the Indian variant of coronavirus.

North-west England reported 152 hospital patients with Covid-19 on May 17, down 97% from its second-wave peak and slightly below the daily average (153) for the past week.

In London, there were 259 patients on May 17, also down 97% from the second-wave peak and below the average (264) for the most recent seven days.

Eastern England, south-east England and south-west England are all reporting patient numbers down 99% on their second-wave peak.

The Midlands has seen its number drop by 98%, while the combined region of north-east England and Yorkshire has seen a drop of 97%.

Responding to the figures, Professor Stephen Powis, national medical director for the NHS, said: “The continued reduction in Covid-19 patients in hospital from over 34,000 in the January peak to fewer than 800 is testament to the hard work of NHS staff who have successfully delivered the world’s first Covid-19 vaccination programme at speed, while caring for 400,000 patients with Covid-19 in hospital, played a key role in introducing life-saving treatments such as dexamethasone as well as continuing non-Covid care, including for cancer, maternity and people who needed mental health support during the pandemic.

“But with cases of variants increasing, it is as important as ever for the public to continue to follow government guidelines and to get the vaccine when it’s your turn.”

The steep fall in patients is fresh evidence of the combined impact of the lockdown and vaccines in helping reduce the number of Covid-19 infections that lead to hospital admission.

Research published last week by Public Health England suggested Covid-19 vaccinations had prevented about 3,900 hospital admissions in England among people aged 65 to 74 up to the end of April, along with 13,100 in those aged 75 to 84 and 16,000 in those aged 85 and older.

Meanwhile, hospital admissions of patients with Covid-19 are back to levels last seen at the start of September.

A total of 70 admissions were reported for May 15.

South-west England recorded just one admission on May 14, compared with a second-wave peak of 347 admissions on January 13.

Written by Megan C. Hills, CNNA 10-foot-tall crystal chandelier and a set of custom-made silver thrones might not scream "contemporary farmhouse." But Mila Kunis and Ashton Kutcher have somehow made them feel at home in their opulent yet rustic hilltop house in Los Angeles.Inviting Architectural Digest magazine into their six-acre property, the couple have delved into the design process behind what Kutcher describes as a "home, not an estate.""We wanted […]