On a Pacific Island, Russia Tests Its Battle Plan on Climate Change 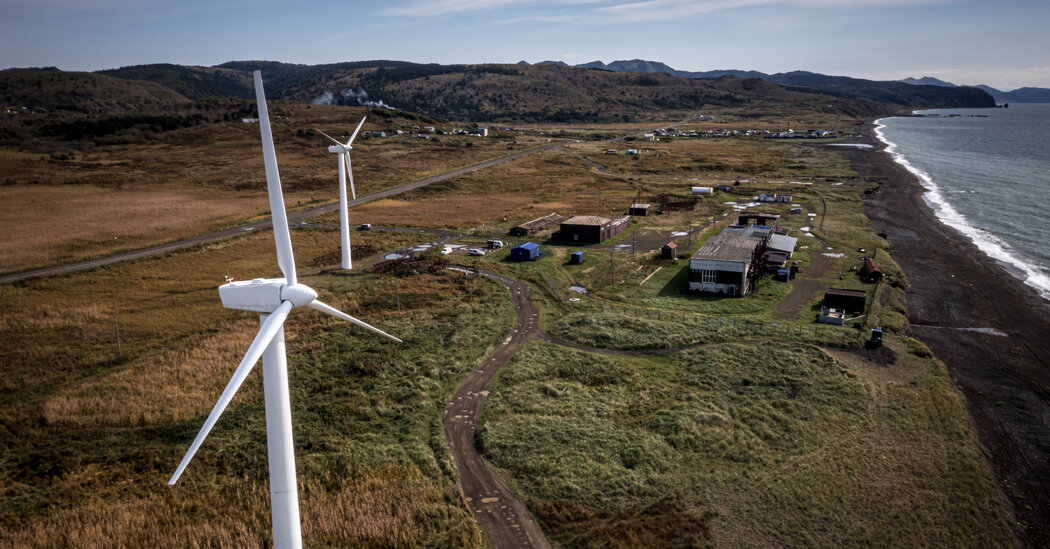 SAKHALIN ISLAND, Russia — Sixteen wind turbines are slated to go up amid the winding coast and wooded hills of this Russian island in the Pacific, creating a wind park bigger than any that currently exists in the vast reaches of the country’s Far East.

The clean energy generated by the new wind park will go toward mining more coal.

Russia is scrambling to retain the wealth and power that come from selling fossil fuels to the world, even as the Kremlin increasingly acknowledges climate change to be a human-made crisis that the country needs to do more to address.

Last week, President Vladimir V. Putin said Russia would stop adding carbon dioxide to the atmosphere by 2060. It was a remarkable reversal since Mr. Putin has long dismissed climate science and many in his country see international efforts to combat global warming as part of a Western plot to weaken Russia. His announcement comes two weeks before world leaders are set to converge in Glasgow for a pivotal U.N. climate summit.

But it’s unclear if Russia is sincere in its new pledge. Russian energy experts and government officials acknowledge the moves are largely driven by economics, with the European Union’s plans for tariffs on heavily polluting countries threatening exports from Russia, the fourth biggest among nations in terms of greenhouse gas emissions. Some elements of Russia’s plans have prompted skepticism, including a heavy reliance on forests as a tool to absorb carbon dioxide.

And the country continues to invest in producing more oil, gas and coal, doubling down on an industry that has allowed the Kremlin to reap profits during a global energy crunch and wield leverage over Europe, its main customer.

Russia’s climate contradictions are on display on the 600-mile-long island of Sakhalin, just north of Japan. The relatively wealthy region of 500,000 people is rich in hydrocarbons, the backbone of its economy. But the regional government last year pledged to make Sakhalin Russia’s first “carbon neutral” region by 2025 — one that absorbs as much carbon out of the air as it emits.

Sakhalin’s plan shows that natural gas — which is less polluting than coal — and its carbon-absorbing forests will be key to Russia’s approach to reducing its net emissions.

“We don’t want to do anything that would stop the development of your companies,” Sakhalin’s governor, Valery Limarenko, said at a recent oil-and-gas conference on the island, toasting a hotel ballroom full of Russian energy executives snacking on sushi and raw mollusks. “We are going out to sea together, we can see the harbor, and we know where we are going.”

For now, Sakhalin’s plans to meet its goal of going carbon-neutral — which also include emissions trading, hydrogen power, renewable-energy plants and developing carbon “sinks” — exist mainly on paper. But they are indicative of the changing dynamics in a country where temperatures are rising more than twice as fast as the global average.

“Probably the most important thing now happening in Russia is that a certain consensus is coming together around climate change,” Dmitri N. Peskov, Mr. Putin’s special envoy for technological development, said in an interview. “In the last half year, it has become clear that Russia is at the center of changes to the climate.”

Much of Sakhalin is covered by majestic forests of spruce and fir. They tell the story of Russia’s role in fighting climate change, and of its vulnerability to it.

In Sakhalin, according to the government, forests already absorb 11 million of the 12 million metric tons of the carbon emitted by human activity — making the goal of carbon neutrality achievable with relatively minor reductions in emissions.

Nationwide, Russia plans to more than double the amount of carbon counted as being absorbed by its vast forests by 2050, according to a draft government strategy seen by The New York Times. Some of that increase would come from fighting forest fires and by changing forestry practices. But it would also result from changing how that absorption is calculated using “modern mathematical models based on neural networks and artificial intelligence,” provoking skepticism from environmentalists.

“The problem is these numbers are not based on any reliable data or studies,” Vasily Yablokov, a climate specialist at Greenpeace Russia, said.

In Sakhalin’s woods, there are more and more patches of bleak lifelessness. The bark of gray, dead, towering trees is punctured by tiny pinpricks: traces of the European spruce bark beetle.

Already, at least 30,000 acres of spruce have been killed by insects in Sakhalin, according to Kirill Korznikov, a botanist at the Far Eastern Branch of the Russian Academy of Sciences. Dying forests in turn damage Sakhalin’s fragile river ecosystems, threatening future salmon stocks — and reducing the amount of carbon absorbed from the atmosphere.

“We’ve never had such storms, we’ve never had so many bugs,” said Mr. Korznikov said. “But people don’t have a full understanding that these phenomena are connected to changes in the climate.”

Mr. Putin long dismissed the scientific consensus that human activity was to blame for the warming of the planet. Rather, he said in 2018, climate change could be caused by “cosmic changes, shifts of some kind in the galaxy that are invisible to us.”

Then, last year, a devastating oil spill in Siberia caused by thawing permafrost toppling a diesel tank underscored the particular danger that global warming poses to infrastructure in Russia. Two-thirds of the nation’s territory is covered by frozen ground. This year, for the third summer in a row, Siberians faced the worst wildfires they could remember, stoking their anger at the government.

“Why has nature gone mad?” a television viewer asked Mr. Putin on his annual call-in show in June.

“Many believe, with good reason, that this is connected primarily to human activity, to emissions of pollutants into the atmosphere,” Mr. Putin responded.

Two weeks later, the European Union announced plans for a carbon border tax on imports from countries that are not taking steps it deems sufficient to reduce greenhouse gas emissions. Imports from Russia, analysts predicted, would be hardest hit.

Dinara Gershinkova, a former Kremlin official who oversees Sakhalin’s climate efforts, said that international pressure has been “a real lever” forcing Russia to reduce emissions. The past two years, she said, have been “totally crazy” as companies with foreign investors sought advice on how to meet international environmental standards.

Under its existing plans, Russia will meet the pledge it made as part of the Paris climate agreement to reduce its emissions by 30 percent by 2030 compared to 1990 levels, even though its emissions could still rise in the coming years.

But there are signs that Russia will revise its plans to be more ambitious. The government’s draft climate strategy calls for Russia to reduce greenhouse gas emissions by 79 percent by 2050. Making a meaningful contribution to the global fight against climate change, the document notes, would foster “a positive image of Russia in the world, stimulating the development of foreign trade relationships.”

Russia will likely bring its own demands to the climate summit in Glasgow. They include international recognition of carbon-capture projects done in Russia and treatment of nuclear and hydropower as “green” on par with wind and solar energy, officials have said. There is even hope that Western countries might relax sanctions to reward Russia for taking a more constructive position.

“A mutual enemy unites,” Mr. Peskov, the Kremlin envoy, said. “Russia possesses a series of keys to solving the problem of global warming, which is very hard to solve without us.”

Yet there is also a harder edge to Russia’s emerging stance: the idea that Europe and the United States, with their low-lying coastal cities, have more to lose than Russia, which sees benefits to trade and agriculture in the thawing Arctic and warmer temperatures.

“In the long term, there’s no question we are the beneficiaries when it comes to climate change,” Mr. Peskov said. (He has no relation to Dmitri S. Peskov, the Kremlin spokesman.)

Holding on to Fossil Fuels

In Sakhalin, the regional government’s plan for carbon neutrality shows that officials will try to maintain their existing fossil fuel industries for as long as possible. The island is one of the Pacific’s biggest hubs for oil and gas production, with investors that include Royal Dutch Shell and ExxonMobil.

Aleksandr Medvedev, an executive at the state-owned energy giant Gazprom, pledged at the Sakhalin conference last month that natural gas would hold “key significance in the global energy mix even at the end of this century.”

Natural gas emits about half the carbon dioxide of coal but still generates pollution that is warming the planet, and its pipelines are vulnerable to leaks of methane, a potent greenhouse gas.

Still, as part of their push for lower emissions, the Sakhalin authorities are encouraging car owners to convert their engines to be able to run on natural gas. The government covers as much as $2,000 in costs and touts the fuel to be more than twice as cheap as regular gasoline. At Gazprom-run natural gas filling stations, customers have to step a few yards away from their car, for their own safety, after affixing the hissing nozzle to a makeshift valve under the hood.

Natural gas is also slated to replace the scores of coal-burning municipal heating plants scattered across the island.

And Sakhalin’s thriving coal industry is not going anywhere, either.

East Mining Company, Sakhalin’s major coal miner, says it has tripled its annual extraction to 12 million tons in the past five years and promises to keep growing. Coal prices in the company’s Asian export markets are skyrocketing amid the global energy crunch.

The company’s chairman, Oleg Misevra, has said that the threat of climate change is “forcing humanity to unite and take radical measures.” In East Mining’s case, that means putting up a 67-megawatt wind farm to power its open-pit coal mining operations; it erected wind-monitoring equipment to find a suitable spot last month. Mr. Yablokov, of Greenpeace, called the plans “totally surreal.”

“Wind turbines are supposed to replace fossil fuels, rather than support them,” Mr. Yablokov said.

East Mining declined interview requests. In Uglegorsk, the mining town near the company’s main operations, there is little faith in its environmental pledges. The debris from its coal quarry collapsed in July in a massive landslide that, activists say, polluted the area’s water supply. After the municipal newspaper reported on the disaster, the mayor tried to fire the editor in chief.

“They’ve learned to say the right words,” said Vladimir Avdeyev, a 61-year-old Uglegorsk activist, as he surveyed the gray expanse of landslide debris stretching across a valley outside town. “We see deeds of an opposite character.” 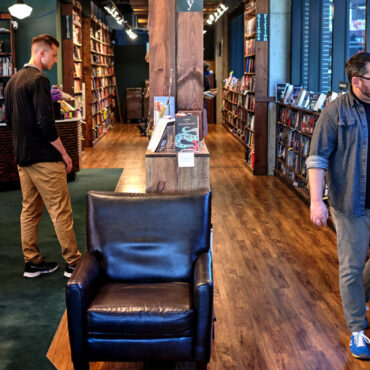 Those Gifts You Want for the Holidays? Don’t Wait Too Long.

“We own a lot of inventory, but it’s just not where we can use it,” said Katherine Gold, the president of Goldbug, a children’s sock manufacturer based in Denver. “It’s sitting on a boat or it’s sitting in a port.”Beyond the immediate challenges, the upending of the supply chain has exposed fault lines for manufacturers and retailers. And it has forced a rethinking of the classic business model, developed by […]