One in three care home residents self funding care before pandemic That’s according to data from the ONS

More than a third of care home residents in England were paying for some or all of the care before the coronavirus pandemic, figures show.

Some 36.7% of care home residents were self-funding their care between 2019-20, according to experimental statistics from the Office for National Statistics (ONS).

It is the first time the ONS has published figures on self-funders in care homes, and will provide a pre-pandemic baseline for research.

It analysed data from care homes collected by the Care Quality Commission covering the period August 2019 and March 2020.

People classed as self-funders were either paying for their own care privately or had their care provided by a charity, while some may also have been receiving some NHS-funded care.

Care homes in the most deprived areas, smaller care homes and care homes for younger adults had the lowest percentage of residents self-funding their care.

Care homes in the most deprived parts of England had a smaller proportion of self-funders – 21.6% compared to 53.8% in the least deprived areas.

Care homes with less than 20 beds had the lowest percentage of self-funders (15.1%) compared to care homes of all other sizes.

And 49.6% of residents in care homes for people aged 65 and over were self-funding their care, compared to 4.8% of those in homes for younger residents.

Julie Stanborough, deputy director of health and life events at the ONS, said: “Today’s findings from experimental research show that in England, around 37% of care home residents paid towards the cost of their care, compared with 63% who were state funded.

“However, we saw geographic differences, with more residents self-funding their care in the South East.”

Pete Davies, senior organiser at the GMB union, said: “The under-funding and exploitation of our care system has weighed heavy on those who find themselves having to pay for their own care.

“Many people are paying far above the rate that a local authority would pay for the same service.

“Ultimately, they are paying over the odds and often being plunged into debt to prop up a broken system – one that relies on gross injustice to generate bloated profits for shadowy private companies.” 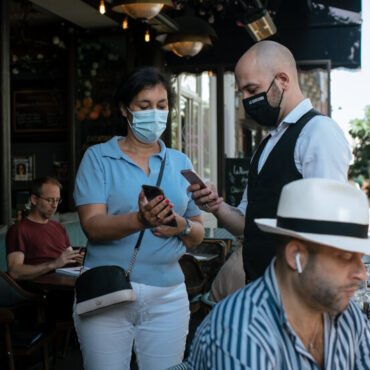 BRUSSELS — As Italy enforced Europe’s most stringent vaccine requirements on Friday, a patchwork of measures across the rest of the continent reflect those nations’ domestic politics and potential opposition against such measures.In more than a dozen of the European Union’s 27 countries, some form of a Covid pass is often required for entering indoor public spaces or large events or for long-distance travel as the authorities have tried to […]